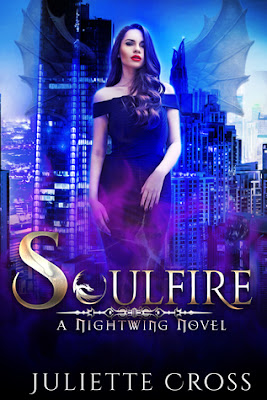 Soulfire by Juliette Cross
My rating: 5 of 5 stars
Amazon

In a world divided by prejudice and hatred, only love can bridge the chasm.

Tensions are rising in the Gladium Province. The boundary between humans and Morgons has begun to blur. While the human aristocracy strives to maintain distance between their daughters and the dragon-hybrid race, fate has other plans.

As the daughter of the corporate king, Jessen Cade is duty-bound to honor her arranged marriage to a man she detests. Feeling trapped by family duty and a loveless future, she longs for more, straying to the Morgon side of the city.

Lucius Nightwing is the eldest son of the powerful Morgon clan, and the greatest enemy of Jessen’s father. When a bar-room brawl thrusts Jessen into his arms, his dragon roars to the surface, craving to sate his carnal hunger in the brown-eyed beauty. The beast in Lucius recognizes her as his own, even if the man refuses to admit the truth.
My Review:

Jessen (Jess) Cade and Lucius Nightwing are on opposing sides of the conflict between humans and Morgons. Jess is part of the human aristocracy with a controlling, manipulative father, a brother walking in his footsteps, and a mouse of a mother. She only hopes her young sister gets through unscathed. Forbidden from any communication, Jess rebels and ends up in a nightclub filled with Morgons to watch a friend’s band. When all hell breaks loose, at the hands of Jess’s brother and his best friend, Jess finds herself in the protective, and sexy, arms of Lucius Nightwing.

What blooms is a romance that neither expected and Lucius tries to deny. Only – his dragon will have none of that denial. Jess belongs to him! Loyalty is tested, decisions are forced upon Jess, and those that claim to love her do some horrible things. Jess truly learns who the real monsters are, and it’s not the dragons.

Once I began this book I was hooked. I devoured it in one sitting. The story is engaging, and the characters are wonderful. I enjoyed the interactions between Jess and Lucius and loved Ella and Sorcha. Soulfire is a riveting, fast paced story told with passion. I love Juliette Cross’s writing style and the way she tells stories. Soulfire is not my first experience with this author, nor will it be the last. Her ability to create paranormal stories with romance, action and a solid plot is what keeps me coming back.

To me, this story is a lesson in judgement. Humans are wary of the Morgons and vice versa but Jess’s father and his associates take it to a whole new level. They don’t mind taking from the Morgons, but all the race is to them is a way to get richer. They don’t have any use for them. Jess, after meeting Lucius, see a side to the Morgons that the human aristocracy refused to see. For that, Jess becomes more open minded, infuriating her father. Then he does the unthinkable (you’ll have to read the book to find out what that is). Humans tend to judge others either because of upbringing, one bad situation, peer pressure, or whatever reason/excuse. We refuse to see that everyone is worthy of love, attention, and the right to live happily, regardless of who they are or where they came from. I may be reading into this book too much, but I see this book as one of hope. Jess and others have the ability to change the way humans think about Morgons and sometimes that goodness is infectious – making their world a much better place, one couple at a time.

**I did not have a chance to read the first edition of this book.

I was provided a copy to read. My review and opinions are my own.