Revenge Is Best Taken with Claws 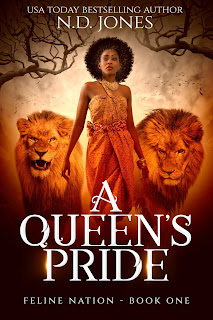 For centuries, humans descended on shifters' lands, killing and claiming. They devoured all in their path--gold, God, and glory their battle cries. From the flames of destruction on the Zafeo continent, two nations emerged--the human territory of Vumaris and the feline nation of Shona.

For eighteen-year-old Asha, traveling to Vumaris with her parents, lion alphas of the Kingdom of Shona, should've been a simple matter. Recommitting to an eighty-year-old peace treaty between their countries should've been easier still. Yet, greed and corruption know no boundaries of time and place. So when a group of mercenaries converges on Sanctum Hotel, hellbent on kidnapping Asha and assassinating her parents, her family trip turns into the bloodiest night of her life.

Will Asha lose those closest to her heart--her parents and Ekon, a young bodyguard she loves. If so, will she forgive her enemies or seek divine retribution?

Only time will tell, and it's running out for Princess Asha of the Kingdom of Shona.

Asha flipped from one television station to the next, her mind more on the way Ekon had made her body feel than on finding a show for them to watch before Mafdet took over the post and sent Ekon to his suite. While Zarina had raised Asha to speak her mind, she had also taught her to do so with forethought and care. Zarina may have a tendency to shock people, but it wasn’t because she hadn’t calculated the impact of her words before uttering them. But her mother had yet to teach her how to curb her thoughts when her body wanted to do the talking for her.
Foregoing the television, she clicked it off and dropped the remote control onto the couch cushion beside her. She ached in places she wanted Ekon to touch. If she were alone in the suite and in her bed, she’d close her eyes, slip her hand inside her panties and—
Knock. Knock. Knock.
Opening eyes that had closed of their own volition and dropping the hem of her dress she hadn’t consciously lifted, Asha sat up—embarrassed and breathless.
The knock came again.
Asha stood. Waited. A Shieldmane would announce himself, even Mafdet who had a key to the suite. Her parents would call, if they required something of her, expecting Asha to come to them, not the other way around.
By the time the third round of knocking sounded, Asha had moved closer to the door, scenting more than the human on the other side.
“Miss. Miss. Are you inside? We have an emergency. We need to evacuate this floor.”
The man knocked again--hard and urgent.
Peering through the peephole, she saw a tall man dressed in the same uniform she’d seen the front desk workers wear. He appeared both anxious and impatient. If there was a fire or gas leak, the man’s emotions were justified. Asha and Ekon needed to get out of there.
She unlocked and opened the door. Mistake. Asha stepped backward, and the human stepped forward, shutting the door behind him.
A gun she hadn’t seen through the peephole pointed at her.
“Don’t scream. Don’t fight. If you follow my directions, you won’t get hurt.”
If he didn’t have a gun leveled at her stomach, Asha could’ve misinterpreted his smile as a sign of kindness.
“You’re making a mistake.”
“No, I’m making the world better for humans.” Gun hand steady, the man who clearly wasn’t a hotel employee, scanned the outer room of the suite. “Is someone in here with you? A guard?” Green eyes tracked up and down her body. “Yeah, as pretty as you are, there has to be a guard nearby. Where? Bedroom? Bathroom?”
Asha wouldn’t tell a lie, only to be caught in one, but she also wouldn’t reward the human’s threat of violence with the truth.
“Fine. I’ll take your silence as a yes.” He drew closer, blond hair pulled back in a shoulder-length ponytail Asha would rip from his scalp if given an opportunity to strike. “We’ll just wait right here for whoever is in that other room to come out.”
They waited. It didn’t take long since Ekon had already been in the ensuite for five minutes. Asha knew why he’d made a quick escape. She hadn’t been toying with him when she’d asked to see him naked. She’d very much wanted to feast upon his body … and with more than her eyes.
The door to the ensuite creaked open.
The human shoved the barrel of the gun against her ribs, his breath smelling of cigarettes when he whispered in her ear. “I knew someone was in here with you. You’re too important to be left alone. But didn’t your parents ever warn you about opening doors to strangers?” His other hand found one of Asha’s curls and twisted it around his finger. “I told them I could get you to open the door for me. It was the uniform, wasn’t it? No need to answer, little girl. Now, let’s see who came to play.”
Ekon appeared in the living room, having reached them on soundless feet. If not for the creaking door, the human would’ve never known he approached. As it was, though, it was Ekon who was taken by surprise.
Asha saw the moment her gentle boyfriend morphed into her deadly Shieldmane. His eyes darkened, eye teeth lengthened, sharpened, and his fingernails transformed into long, curved claws.
Ekon stalked toward Asha, his focus on the gunman.
In a swift upward movement, the human pointed his handgun at Asha’s head. “Calm down, kitty, or I’ll splatter her brains all over this white carpet.”
Ekon halted.
“That’s good. Real good. Put those fangs and claws away, friend.”
“I’m not your friend. If you want to make it out of this room alive, you need to get that gun away from her and leave.”
“Yeah, no, that’s not going to happen. She’s why we’re here. Where we go, she goes. You’re the one I don’t need.”
A lion roared, and Asha had never heard a more beautiful sound.
“That would be my father.”
The roar was followed by gunfire, then what sounded like all-out war in the hall.
“Fuck! Fuck! What in the hell are those guys doing?”
“They’re fighting my parents, which means they’re dying. If you give Ekon your gun, you won’t have to die with them.”

N. D. Jones, Ed.D. is a USA Today bestselling author who lives in Maryland with her husband and two children. In her desire to see more novels with positive, sexy, and three-dimensional African American characters as soul mates, friends, and lovers, she took on that challenge herself. Along with the fantasy romance series Forever Yours, and a contemporary romance trilogy, The Styles of Love, she has authored three paranormal romance series: Winged Warriors, Death and Destiny, and Dragon Shifter Romance. 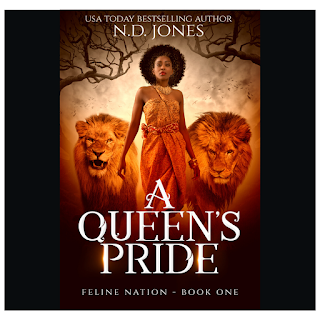 a Rafflecopter giveaway
at 5:45 AM