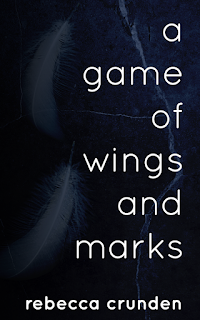 A Game of Wings and Marks
Rebecca Crunden

When Octavia Coal goes to the mountains to clear her head, she doesn’t expect to find an angel in trouble.

He tells her his name is Tamiel and he’s one of the Irin – the army of angels tasked with keeping demons from overwhelming humanity. But Tamiel broke a sacred law – he fell in love with a human – and now he’s being hunted by the same angels he once served.

With nowhere else to go, Octavia and Tamiel – along with Jack, the human in question, and her brother Caleb – appeal directly to Zev, the Demon of Games. A trickster of unparalleled power, Zev gives nothing for free, and the gift he offers Octavia to keep Tamiel alive comes with a confusing catch: He makes her the Healer of Raphael, archangel and Commander of the Irin.

Suddenly a target for both angels and demons, Octavia quickly learns that the only way to survive is to play the game better than they do.

The only problem is, she doesn’t know whose game she’s playing …

Read an Excerpt from A Game of Wings and Marks by Rebecca Crunden:

There was a loud banging on the door behind them. Everyone turned sharply to look at it.
Zev waved his hand and for a moment the banging stopped, only to renew with more gusto. He stood and strolled over to the door, purple flames curling around his hands like vines.
‘Wait,’ said Tamiel. ‘It’s the Irin.’
‘They have no authority in Blood and Bone, Tamiel,’ said Zev before yanking open the door and glaring at the loud intruders. ‘What?’
In the doorway stood three very intimidating angels, one male and two females. The Watchers wore black trousers and boots, but no other clothes. Their chests were covered in armour and each had multiple weapons. But it was their wings Octavia stared at, only then understanding the extent of what had been done to Tamiel.
Angel wings were stunning. There was nothing birdlike about them. They were nearly reptilian. Sinewy. Feathers like satin and metal, bone like armour made from earth. Weapons and transport, beautiful and deadly. Two of the angels had grey wings, one had white. They were also enormous. A chill went down Octavia’s spine.
Zev closed the door behind them, his eyes flashing irritably at this intrusion. Octavia got the feeling that they were only getting as far as they were because he wanted to see exactly what it was they would do, not because he couldn’t make them leave. He seemed to have a good deal of power and she hoped he was on their side.
‘Tamiel, you are to come with us,’ said one. ‘You have broken the law.’
Octavia, Caleb and Jack all moved closer to Tamiel. It wasn’t like they could actually do much if the angels decided to take him, but there was strength in solidarity, and Octavia felt more courageous with them beside her. At least they were all equally as screwed.
Tamiel regarded the three angels with a look of disappointment. ‘I didn’t think it would take you nearly so long, Hamon.’
The angel nearest them sneered. ‘How’s life without wings?’
Tamiel bristled. ‘I hope you never know.’
‘Come with us,’ said the second angel. ‘It’s better to go quietly, Tam.’
‘I thought you were better than this, Peliel,’ said Tamiel softly. ‘Aren’t we friends?’
Peliel looked away, jaw clenched.
Hamon, on the other hand, seemed to delight in being there. ‘Take him,’ he said to Peliel and the other.
Before they could move, Zev’s eyes flashed, and the very air seemed to shudder.
Everyone looked at him.
‘Blood and Bone is a haven for all species from all worlds, from all planes, Watchers, and best you remember it,’ he snapped. ‘Tamiel is under my protection and I will remove you all if you annoy me further.’
‘Take down the wards, Zev,’ said Hamon. ‘You are interfering in business not of your understanding.’
‘Oh,’ mocked Zev, ‘do demons not understand angel business? You do not have authority here. This is my home and I am the law. Blood and Bone is a sanctuary.’
Hamon’s hand shot out, but if he expected that to do anything he was sorely disappointed. He looked at Zev as if he would enjoy nothing more than ripping his spine out through his chest. ‘Remove the wards, filth.’
Zev looked at him with unmasked scorn. ‘I am far older than you, Watcher. Don’t test me. I have signatures in blood from your betters which will see you sent back to Parid if you choose to ignore their truce.’
Octavia and Caleb exchanged looks of impressed approval. She wondered what it must be like to have that sort of confidence in one’s own abilities and powers.
It didn’t seem like Hamon particularly cared. He raised his sword.
Tamiel held up his hands. ‘There are humans amongst us – we must all remember that.’
The third angel said, ‘Then best leave with us and avoid bloodshed.’
It was impressive how little fear Tamiel showed. His glare ought to have levelled her. ‘I’m going nowhere, Sorush.’
‘Then you leave us no choice,’ said Hamon. ‘No one will miss one Healer who’s broken the law.’
‘There are three humans here!’
‘The ends justify the means, Tamiel. That is our law. You have broken our most sacred!’
Zev’s hands shot out, the tattoos on his fingers shimmering purple before returning to black. 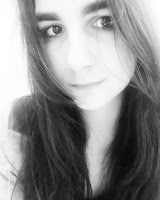 Rebecca Crunden is an Irish-based author originally from Texas. Obsessed with both writing and reading for as long as she can remember, she began writing as a child. After completing her first series, she decided to start independently publishing her novels in 2017. To date she’s published one series, two standalone novels, a novella, and co-written an anthology. When she’s not writing, reading or drinking ridiculous amounts of coffee, she’s hiking with her partner and watching an insane amount of science fiction-fantasy shows. 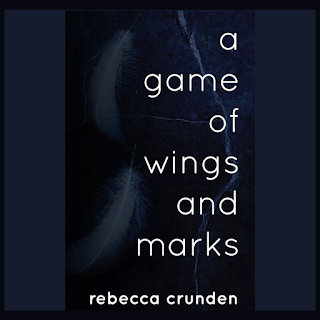