Vlad Chomsky invites his new love Beatrice on a romantic river cruise, but his eccentric landlady, Sandra Tooksbury, and her ill-tempered poodle, Gaston, finagle their way on board and embroil him in a jewel heist. 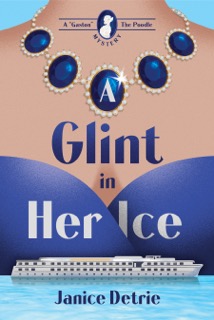 Professor Vlad Chomsky needs a break after saving the town of Crawford, Wisconsin from terrorists, and he knows exactly how to get the rest and relaxation he needs—a romantic Rhine River cruise with the lovely librarian Beatrice Krup.

Vlad imagines sharing his passion for history with Beatrice as they tour the castles, museums, and cathedrals of Germany, while spending warm spring evenings together watching the river glide by—without his ex-wife and kids, and especially without his elderly landlady Sandra Tooksbury, her friend and handyman Norm, and her feisty toy poodle,  Gaston. Yes, Gaston helped Vlad save Crawford, but he doesn’t need a crowd watching—and offering advice—as he takes his relationship to Beatrice “to the next level.”

But Vlad has forgotten Norm and Sandra’s ability to show up just when they aren’t wanted and is dismayed when Sandra hoodwinks her way on board the cruise, Norm and Gaston in tow.

When Norm becomes the prime suspect in a diamond heist, Vlad’s hopes for a quite, romantic cruise are shattered. Will Gaston and the gang discover the real thief in time? And will finally have a chance to “pop the question” to Beatrice?

This is the second adventure of Vlad, Gaston the Poodle, and all of their friends. You can find out more about them in Jan Detrie’s first book, The Seven Ten Split.

Purchase Your Copy on Amazon

It couldn’t be!” Vlad exclaimed, and he pushed himself into the crowd. But it was.
Below him, Sandra Tooksbury in the aged flesh pointed to the crumpled vest adorning Gaston with bold lettering. The overweight poodle with the dingy white fur wagged his tail but showed no sign of retreating from the gangplank.
“Can’t you read, young man? It says ‘Service Dog’ on his harness. This dog is a highly trained service dog. MY service dog,” she declared. “He accompanies me wherever I go because of my disability.”
The attendant grew flushed but said firmly, “Like I said, madam, no dogs are allowed on board the ship.”
“I was told by the young man who made my reservation that service dogs were allowed on board ship.”
“That dog doesn’t look like any service dog I’ve ever seen,” sneered the older crewmember manning the gangplank. “He looks like a clown dog escaped from the circus.”
“I’ll have you know, young man, I’m prone to having seizures, and this service dog warns me and my traveling companion when I’m about to lose consciousness,” Sandra said indignantly.
“Your traveling companion? Who might that be?” asked the crewmember.
Vlad groaned as Norm pushed his way through the throng bottlenecked at the gangplank and planted himself next to Sandra, resting his fists on his hips.
“I’m her traveling companion. I’m trained in first aid procedures, and I know what to do when her service dog gives the warning,” he declared.
“If that fat mongrel is a service dog, then I’m Angela Merkel,” snorted the older man.
“You don’t know who you’re dealing with, sir. I’ve long retired from show business but I still have friends in high places. You don’t want to tangle with talk show stars. They’ll smear your cruise line all over the Internet,” Sandra threatened. “Check me out on YouTube. My dog and I are celebrities.”
Sandra opened her purse and began rummaging through its contents, scattering used tissues, a half-eaten Mars bar, and several restaurant receipts on the ground. “Here it is. The headline story from The New York Times. ‘Dog Brings Down Terrorist.’”
She thrust the Crawford Daily Gazette in the crewmember’s face.
“Madam, this is not The New York Times,” he said. “It’s some small-town paper.”
“Don’t you get smart with me. The New York paper ran the story, too. It was all over the country. My dog is famous.”
“I don’t dispute that, madam, but famous or not, I can’t go against the ship’s policy.” said the man, running a meaty hand through his thinning hair. “I could lose my job.”
“Then I demand to talk to your captain. You can check with Laurant in reservations. He told me my service dog was allowed on board with me.”
Just then Vlad felt a burly man in an immaculate white uniform push past him, captain insignia gleaming.
“What seems to be the problem, Seaman Klaus?” he growled.
“This elderly lady wants to bring her dog on board, and I told her that’s not possible,” his voice rose to a whine.
“He’s a service dog, Captain. I need him to warn Norm here when I’m about to have a seizure. I was informed service dogs are allowed.” Sandra thrust out her chin defiantly.
The captain scratched his head before he spoke.  “I’ll check with headquarters, madam, if you’ll just step aside and let the other guests through.” He looked at the disgruntled passengers behind her and Norm.
Vlad saw Sandra flick her index finger at Gaston. Immediately, he began to bark loudly. Not just loud but frenzied barking, so extreme that his body shook, belly fat undulating like waves on the nearby river. He jumped on Norm, grabbing his pant leg with his teeth and dragging him close to Sandra.
As if on cue, Sandra emitted a loud moan. She jerked her head backwards, and her body went rigid. She toppled like a Northern Pine felled by a lumberjack straight into Norm’s outstretched arms.
“She’s having one of her attacks!” Norm shouted. “Stand back. Give her some air.” He gently lowered her onto the grassy bank alongside the ship and began wildly waving his Green Bay Packers cap in front of her face.
A lady shrieked, “Is there a doctor here?”
Gaston’s barks turned into pitiful howls as he sat on his haunches next to her.
“I’m her guardian! Let me through!” Vlad exclaimed as he pushed through the crowd and rushed down the gangplank. He knelt beside her and reached for her wrist. He could see the blue veins standing out in her frail arm, a tangled network, and felt for her artery with his fingertips. Her pulse felt strong, and he let out a sigh of relief.
“She’s had a mild heart attack before, but her pulse seems all right.” he said to the captain standing nearby.
Sandra let out another little moan, and her eyes fluttered open. “Where am I?” she mumbled. “What happened?” Then she closed them again.
“Ya had another one of yer spells,’’ Norm said. “But yer all right. Gaston let me know just in time to catch you.” The dog’s howls changed to a whine as he stuck his head under her limp hand.
Another moan and then her blue eyes opened wide. “My goodness, Vlad, is that you?” She struggled to sit up.
“What are you doing here? The last thing I remember is some rude fellow arguing with me about boarding the ship. Then everything went dark. I must have had a seizure.”
Every eye in the gathering crowd now turned to the reddening crewmember and glared at him.

Janice Detrie lives in Watertown, Wisconsin, with her husband Michael and her cat who thinks he’s a dog. A former literacy coordinator, her reading tastes are eclectic, everything from biography to mystery to the classics to nonfiction. She enjoys traveling and theater. She has two children and two grandchildren. A Glint in Her Ice is her second book featuring Vlad and Gaston. 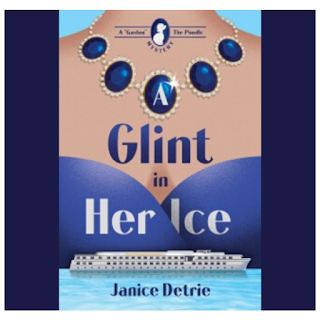