An exciting new blog tour celebrating When Shadows Fall, the final book of the Dark Sun Dawn Trilogy by Stephen Zimmer, is taking place from January 15-22, 2020! 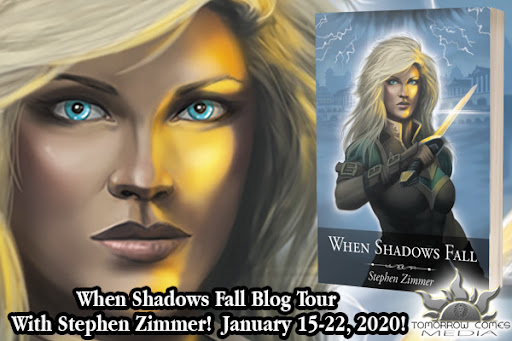 The tour features interviews, guest posts, top tens, reviews, and even a tour-wide contest sponsored by the author! The contest offers bonus entries for following participating bloggers on Twitter and includes signed copies of the entire trilogy in paperback editions, among several other prizes!

If you like action-drive fiction, fantasy, sword and sorcery, or heroic tales with a strong female protagonist, this is the trilogy and tour for you!

Thoughts on Adaptations from Page to Screen
By Stephen Zimmer

The new year is underway and began with the Dark Sun Dawn trilogy being complete with the release of When Shadows Fall toward the end of 2019. The novel was not the only new release in the Rayden Valkyrie Universe to take place last year. The eBook novella Prowling the Darkness emerged in the spring, and then, later in the summer, the proof-of-concept TV pilot Rayden Valkyrie: Saga of a Lionheart was made public on the Seventh Star Press YouTube channel.

Starring Instagram sensation Brock O’Hurn and Sol Geirsdottir as Ragnar Stormbringer and Rayden Valkyrie, the show introduces an ensemble cast and original storyline that is designed to be told across a full season of episodes.

You can watch the entire show for yourself, absolutely free, at the following link: https://www.youtube.com/watch?v=OhXJatO5gYM&t=34s

While the tv pilot project involved an entirely new storyline that was not previously in a book format, I get asked often about adapting the Rayden Valkyrie novels and novellas for the screen. The big challenge whenever an adaptation takes place is that the medium of film and books are truly apples and oranges; they are very different entities in terms of storytelling.

With books, you can go into the minds of the characters and reveal their thoughts, perspectives, and feelings. With visual media, you must show everything onscreen and through dialogue. An adaptation must pass through this kind of filter when translating from a novel to a screenplay.

Further, the events in a visual media project have to be depicted in an hour, or possibly ninety-minute or two-hour setting if a feature film, whereas the events in a book can be as expansive as the author can imagine. This why it is often estimated that close to ninety percent of a book never makes it onscreen.

The structure must also be considered. A book that has a more linear narrative tends to be more effective in bringing to the screen, where a more ensemble cast literary work tends to be a little tougher to portray in a television or film medium. This is why I find series such as Game of Thrones to be particularly impressive in being able to succeed with a broader ensemble kind of structure, founded upon the character threads of George R. R. Martin’s novels.

The stories of Rayden Valkyrie that are currently available in the five eBook novellas of the growing Rayden Valkyrie Tales, and the book trilogy of the Dark Sun Dawn Saga (Heart of a Lion, Thunder Horizon, and When Shadows Fall), do have a linear narrative with the focus being on Rayden Valkyrie and her experiences and adventures. They are very adaptable to screenplay formats and I am absolutely confident would result in television shows or feature films that would have a wide appeal to the kinds of audiences that enjoy shows like Game of Thrones, or Vikings, or the Witcher.

Of course, readers will always have their own visualizations of what characters look like and what the worlds they inhabit are like. That’s one of the wonderful aspects about books, in that the reader’s own experience of the book shapes their personal perspective and vision. This is why there is inevitable dissonance when casting is down for a film or TV show, locations are selected, and art and visual FX departments begin their designs, because what makes it on screen is almost certain to have differences with the mental picture held by the reader. Even when the author is involved in the adaptation, this factor is present. In my opinion, this is why film or television versions of a beloved, popular novel always spark a bit of a pushback from the readers, even when the adaptation is extremely impressive such as Peter Jackson’s Lord of the Rings movies.

Ultimately, I think that the two mediums need to be enjoyed and regarded in their own light. They are never going to match up perfectly as they are two entirely different modes of storytelling. There is a wonderful place for both a written tale and the adapted-to-the-screen version in the hearts of audiences that can enjoy them as distinct entities, and I would love to see that happen to an extensive degree with the world of Rayden Valkyrie. 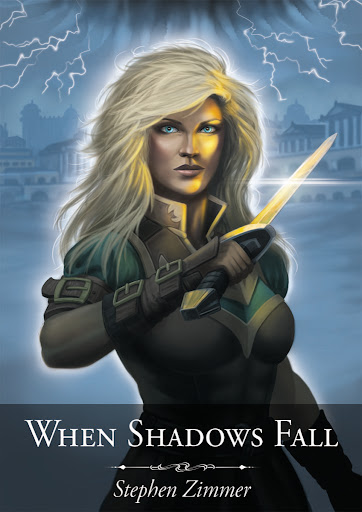 Book Synopsis for When Shadows Fall:

When shadows fall, the dominion of light reigns.

Rayden Valkyrie and her companions enter the Imperial City, the heart of the rising Teveren Empire. Never before has her gaze taken in a city so vast, wealthy, and populous.

Sensual delights, grandiose spectacles, and the spilling of blood enthrall wealthy and poor alike. Beneath the surface, Rayden senses an undercurrent of a darker nature.

Learning everything she can of the venomous secrets lurking within the shadows, little time remains before a host of northern tribes arrives outside its walls.

Power lies within blood, and dark rituals have unlocked mysteries from the depths of the abyss.

Legions are on the march, a storm is about to unleash, and a dark sun will soon rise.

When Shadows Fall, the conclusion of the Dark Sun Dawn Trilogy. 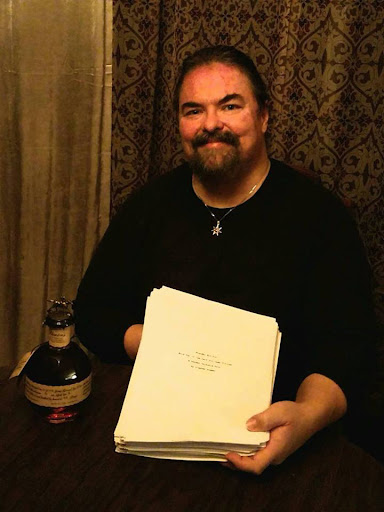 Stephen Zimmer is an award-winning author and filmmaker based out of Lexington Kentucky. His works include the Rayden Valkyrie novels (Sword and Sorcery), the Rising Dawn Saga (Cross Genre), the Fires in Eden Series (Epic Fantasy), the Hellscapes short story collections (Horror), the Chronicles of Ave short story collections (Fantasy), the Harvey and Solomon Tales (Steampunk), and the Faraway Saga (YA Dystopian/Cross-Genre).

Stephen’s visual work includes the feature film Shadows Light, shorts films such as The Sirens and Swordbearer, and the forthcoming Rayden Valkyrie: Saga of a Lionheart TV Pilot.

Stephen is a proud Kentucky Colonel who also enjoys the realms of music, martial arts, good bourbons, and spending time with family.

1/20 Beauty in Ruins - She Leads, he Reads
https://femledfantasy.home.blog Guest Post


Purchase Links for When Shadows Fall:

Enter the When Shadows Fall Blog Tour Contest for a chance at many prizes including a signed trilogy in print! Extra entries available when you follow participating bloggers on Twitter!