New Book Release & #Giveaway ~ The One for You (The Ones Who Got Away, Book 4) by Roni Loren ~ @SourcebooksCasa #HappyNewYear @RoniLoren 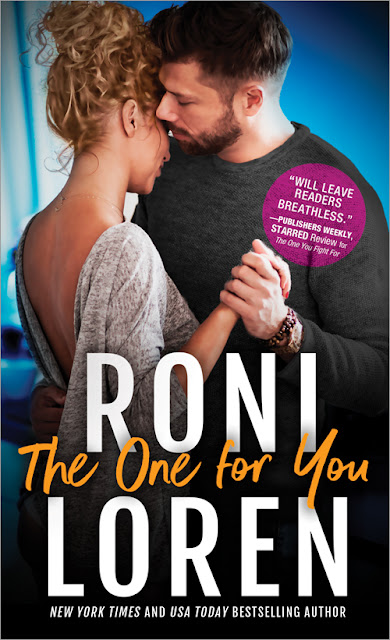 The One for You
The Ones Who Got Away Book 4

The highly-anticipated fourth book in Roni Loren’s unforgettable The Ones Who Got Away series.

Kincaid Breslin wasn’t supposed to survive that fateful night at Long Acre when so many died, including her boyfriend—but survive she did. She doesn’t know why she got that chance, but now she takes life by the horns and doesn’t let anybody stand in her way.

Ashton Isaacs was her best friend when disaster struck all those years ago, but he chose to run as far away as he could. Now fate has brought him back to town, and Ash doesn’t know how to cope with his feelings for Kincaid and his grief over their lost friendship. For Ash has been carrying secrets, and he knows that once Kincaid learns the truth, he’ll lose any chance he might have had with the only woman he’s ever loved.

Roni Loren wrote her first romance novel at age fifteen when she discovered writing about boys was way easier than actually talking to them. Since then, her flirting skills haven’t improved, but she likes to think her storytelling ability has. She holds a master’s degree in social work and spent years as a mental health counselor, but now she writes full time from her cozy office in Dallas, Texas where she puts her characters on the therapy couch instead. She is a two-time RITA Award winner and a New York Times and USA Today bestselling author. Visit her online at roniloren.com.

A sleepy voice came through the door. “Come in.”

Kincaid opened the door and found Ash shifting to sit up in bed, shirtless, tattooed, and with full-on bedhead. Every womanly cell in her body gave a cheer of appreciation, and she had the sudden annoying urge to tilt her head and twirl her hair like a smitten schoolgirl. Luckily, she stopped herself from that embarrassment. She wasn’t there to ogle.

“Everything all right?” Ash asked, swiping a hand across his face and trying to wake up.

Kincaid lifted the phone. “Your ex has been burning up your phone. I got aggravated and answered. Sorry. She’s still calling herself your fiancée, and I believe she wants to yell at you about something.”

Ash groaned. “Hell no. I’m not starting my day off with that. Tell her I’ll call her later or just hang up.”

“I could. Or,” Kincaid said conspiratorially, “we could have a little fun and piss her off in the process. You game?”

His eyebrows lifted, mischief in the tilt of his lips. “I could possibly be game.”

Kincaid grinned and unmuted the phone so they could be heard. “Hey there, sleepyhead,” she said in a flirty voice to Ash. “Rise and shine.”

Ash cocked his head in confusion, but when he saw the look on her face, he caught on fast. “Morning, gorgeous.”

Kincaid put a knee on the bed, knowing the guest bed squeaked and that Melanie would be able to hear and draw her own conclusions. “I know you wanted to sleep in after last night, but that Melanie woman has some sort of emergency and just couldn’t wait.”

Ash smirked, a deliciously evil look on his face. “Baby, you know you shouldn’t be answering my phone this early. We have better things to do right now.” Ash grabbed Kincaid’s wrist and tugged her forward, making her tumble onto the bed and inadvertently laugh. She landed next to him, and he lifted her arm to his mouth, kissing the tender skin of her wrist with an audible sound. On the phone, that kiss could be imagined anywhere.

Kincaid’s skin heated despite the fact that this was a farce. “You probably should take it or she’ll keep calling. I don’t want to be interrupted in the middle of anything, you know?”

Ash chuckled softly, this deep, private laugh, a lover’s laugh. It sent hot shivers through Kincaid, waking up sensations that had been dormant as of late. “Of course not. Wouldn’t want that. Give me just a minute.” He took the phone, the smile dropping from his face. “Melanie.”

Kincaid could hear the rapid-fire voice through the line and remained next to Ash on the bed. Melanie was saying something about him leaving the apartment messy when he moved out. About the landlord keeping the deposit.

Ash grunted, his tone and entire demeanor bored. “I wasn’t paying for a cleaning service to clean up after you. Just because you moved out first doesn’t mean it was my mess. You made this mess.”

More yelling on her end, the volume notching up.

“Melanie,” Ash said patiently, “clearly you feel passionately about this. I can’t say I give a shit, so that puts us at an impasse. How about you send me back your ring, and I’ll consider sending you half the deposit? Otherwise, I’ve got better things to do right now.”

Melanie’s next words were clear as a bell. “Right. You probably can’t even afford the deposit. Are you back to the living-on-ramen plan, Ash? Don’t have your woman’s money to use up now? Or did you just find a new one to pay the rent?”

Ash’s teeth clenched, his skin flushing red from the neck up—the words a match to a fuse. Kincaid saw what was happening, the fire racing up through him. She’d been there. That moment when an ex or a bully gets the best of you, and you stoop to their level. You lose your shit and end up looking like the dumb one or the hysterical one or the one who still cares too much. No way was she letting Melanie win this round. Without thinking, she scrambled to sit up and then swung her leg over Ash’s middle, straddling him.

Ash’s lips, which had been parted to yell, froze in almost comic silence. His shocked gaze jumped up to Kincaid’s, her ambush plan working to stop him in his tracks. She took the phone from him and put it to her ear. “Hey, sugar, time’s up. And I can promise you, neither of us are here for each other’s money. Don’t call again. Bye now.”

Kincaid bit her lip, not sure if it was good for Melanie to know her identity and to think she and Ash were together, but that cat was already bolting away from the bag, too far to catch.

“Ugh,” Melanie said into the phone. “I should’ve known. He always had a taste for the cheap stuff.”

Kincaid smiled, almost entertained. Oh, sweet, misguided Melanie. If Melanie were here, she’d pat her on the hand and shake her head at the lame attempt. The woman was going to have to do better than that to get under her skin. “Oh, bless your heart. It’s so cute when women try to throw other women under the bus just because a guy’s involved—or in your case, two guys. Really moves that feminist needle forward, don’t you think? You should burn a bra.”

“Enjoy your new relationship, sugar,” Kincaid said, cutting her off. “I hope you two are made for each other in every way.”

Melanie was silent, and Kincaid took the opportunity to hang up.

She tossed the phone to the side and braced her hands on either side of Ash on the bed. “Well, if you needed a sign that things aren’t going so well with her new guy, that was a clear one. If she were happy, she wouldn’t give a damn about a couple hundred dollars of a deposit, especially when she has money. And she certainly wouldn’t care if you were sleeping with me—”

“And I know I probably shouldn’t have answered. But she wouldn’t let up, and I just couldn’t help it and—”

“You need to—” He grabbed her by the waist, shifting to hoist her off him, but before he could, she sucked in a breath as she became all too aware of the distinct firmness beneath her.

“Oh shit,” she said, rolling herself off him as if he’d caught fire.

Ash made a pained sound and fell back against the pillow. “Yeah, that.”

“I…uh.” Her cheeks burned as she sat up.

Ash pulled the covers higher and shifted onto his side so the blanket wouldn’t reveal his current condition. He gave her a droll look as he propped his head on his hand. “I really appreciate the effort to irritate my ex, I do. But maybe don’t straddle a guy first thing in the morning. Little hard to control things.”

Kincaid couldn’t stop a snort from escaping. “Did you just say a little hard?”

Ash gave her a you’ve-got-to-be-kidding-me look and then hit her with a pillow.

She laughed as she defended herself from the blow and then couldn’t stop, the laughter bubbling up from deep in her belly. “A little hard,” she said between laughs. “Maybe more than a little. I mean, give yourself some credit.”

Email ThisBlogThis!Share to TwitterShare to FacebookShare to Pinterest
Labels: Book 4, Giveaway, New Book Release, Roni Loren, Sourcebooks Casablanca, The One for You, The Ones Who Got Away