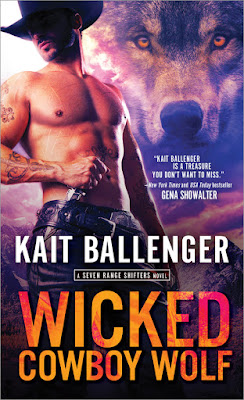 To his enemies, he's known as the Rogue. To her, he's her only chance at survival…

Years ago, Grey Wolf Jared Black was cast from the pack for a crime he didn't commit. Now, he's the mysterious criminal wolf known only as the Rogue, a name his former packmates won't soon forget. But when a vampire threat endangers the lives of their entire species, Jared must confront his former packmates again, even if that means betraying the only woman he's ever loved…

Ever since Maeve Gray escaped the pack's bloodsucking enemies, she's been determined to save her species—and fast. Each passing day risks the lives of her friends and family. But when a wicked cowboy wolf shows up on the Grey Wolf ranch, offering everything Maeve's heart desires, her eyes are opened to a whole new world beyond the packlands. For this cowgirl, sleeping with the enemy could prove as desirable as it is deadly…

Kait Ballenger earned her B.A in English from Stetson University followed by an M.F.A in Writing from Spalding University. After stints in multiple careers, Kait finally decided that her eight-year-old self knew best: that she was meant to be a writer. Kait lives with her husband and young son in Florida.

The pink summer sunset had long since faded to nightfall by the time Mae returned to her cottage on the other side of the Grey Wolf compound. As she approached home, she cringed at the thought of the poor excuse she’d given Alexander. There was no way he’d bought her lie. Sure, she and Maverick had scheduled Alexander for a meeting with the Pact, which was a small step forward, but if they didn’t get him on board and fast, their prospects were limited. But Mae was determined. She would find a way to save her pack. She had to.

Feeling more than a little defeated, she shuffled up to her door, scanning the other nearby pack cabins. Hers was one of many adjacent to the dining hall and the main compound building, which housed the elite warriors and the main pack offices. She grabbed her keys from her purse. As she did so, she glanced over her shoulder, as if she might find the Rogue lingering there in the darkness. But she didn’t. He’d disappeared without a trace.

She released a long sigh. From what she knew of his dangerous reputation, it was just like the arrogant bastard to trod right into a pack of alphas that would just as soon see him torn apart. He really was a rogue with a devil-may-care attitude to match his title. She gripped her keys tighter in her hand.

After unlocking her front door, she slipped inside.

Immediately, the taps of tiny hooves clopping against tile sounded from the darkness. She flicked on the dim entryway light. Tucker, her teacup pig, stared up at her from the white tiled floor, his beady black eyes sparkling with pleasure at her arrival. He let out a pleased oink. Mae grinned.

Bending down, she scooped him into her arms, coddling him like a baby as she cooed at him. Still a piglet, Tucker was no bigger than a small dog, and according to the breeder, he’d been the runt of the teacup litter and would likely stay small.

With Tucker cradled against her, Mae made quick work of feeding him a bottle of milk replacer before snuggling him into his fluffy, pink dog bed in her living room. Once the piglet was rocked to sleep, she showered before she changed into her nightgown and settled into the comfort of her bedsheets. The day had left her worn out, but her mind refused to calm.

Had she really seen the Rogue, or had it all been in her head?

That question still plagued her. She wasn’t sure how he would have gotten onto the ranch without detection, especially considering the heightened security for the reception.

She shook her head. It must have been her imagination, a memory triggered by the stress of Alexander’s questions. The Rogue couldn’t possibly have shown up at Wolf Pack Run only to disappear again.

Though it had felt so real…

She sighed, sinking deeper into her mattress. It wouldn’t be the first time she’d thought of him since their encounter in the vampire coven.

Heat rose in her cheeks. She’d dreamed of him almost every night since—and not in the way she should have. The memory of the night when her life had been threatened by bloodsuckers was a dark one, but when she dreamed of that night, of him, her dream often took a completely different course from reality. Instead of dreaming of the danger she’d faced, she’d woken more than once to the thought of his uncharacteristic heroism as he whisked her from the vampires’ cells, only to find her own hand exploring between her legs.

It was sick. She knew it. She shouldn’t be attracted to a dangerous criminal like him. Despite that, he stirred something primitive inside her. She knew what sort of dark circles he traveled in, yet she couldn’t seem to help it. A wolf like the Rogue was everything forbidden to her: a non–Grey Wolf, a vigilante. Not to mention one of her brother’s enemies, and the antithesis of every criterion she should consider for a mate.

Somehow, that only made him more appealing.

By her birthright, she was destined for a Grey Wolf alpha warrior. She shuddered at the thought. The Grey Wolf warriors were all fine men, handsome cowboys, but they were practically her brothers. Mae tossed and turned in her bed as she tried to put the Rogue from her mind, but still his face taunted her.

Eventually, her hand trailed beneath her nightgown. Maybe if she eased this ache, the desire would go away. Maybe then, sleep would claim her. Slowly, her fingers probed the folds between her legs, locating her own clit. She knew her body, what she liked.

Gently, she massaged and probed as she remembered how it had felt when the warmth of his breath had brushed against her ear, the deep timbre of his voice thrumming through her.

You won’t regret this, he’d whispered.

She imagined his lips trailing downward.