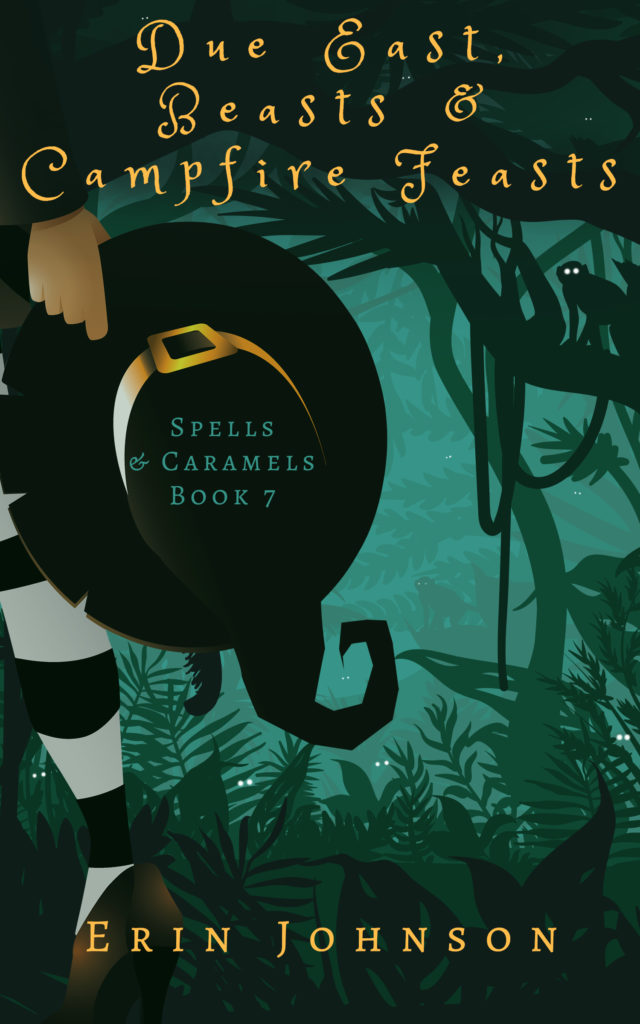 A hostile town. A mountaintop mission. Will their magic save the day or spoil the pudding? Imogen thought escaping the king's wrath would give her everything she wanted. But her relationship with Prince Hank is tougher than an overcooked flan and the welcome they get on Badlands Island is far less than friendly. Accused of kidnapping, Imogen proposes they prove their worth by traveling through a deadly forest to retrieve a magical herb at the top of a mountain…

Forced to take her baking skills on the road, Imogen and her friends must navigate monsters, secrets, and a possible traitor. And the little matter of the impending typhoon is seriously compressing their timeline…

With the storm and creatures closing in, can Imogen complete the quest or will her next meal be her last?

Buy Due East, Beasts & Campfire Feasts to battle a mountain of monsters today!

Due East, Beasts, and Campfire Feasts begins exactly where book 6 ended. Imogen, Hank, Iggy, and the rest of the group fled to Badlands Island to escape the king. Hank is severely injured but recovering, albeit slowly and spends much of the beginning of the book unconscious. Before the group is able to collect their thoughts and formulate a plan, they are surrounded by soldiers and accused of dispatching their captain. Dragged into the town of Kursuri to face the council, to prove their worth, they must go on a dangerous trek up a mountain for a medicinal herb needed by the townsfolk. During this time, Hank finally comes to but is so overcome with emotions regarding Imogen, his father, almost dying, and the secrets and lies, Hank gives Imogen the cold shoulder. Hank’s attitude gave this book an entirely different feel than the previous six books. I really didn’t like Hank all that much after he woke up.

I have really enjoyed this series. Seven books in and the author keeps things fresh and interesting. Imogene, Hank, Maple, and Sam, along with all the others, are well developed characters. They aren't flawless characters but that's what helps give them, and the story, so much charm. The continued world building describes scenes very well and helps the reader develop deeper connections with the characters.

Imogen's character is fun and caring with a bit of emotional baggage making her a very realistic, likable, and interesting character. She has embraced the magic she was born into and she's continually trying to harness and use the magic. She’s tested in that capacity in this book. Imogene and Maple are wonderful and I love their friendship. Iggy the flame is the best! He's mouthy but Iggy and Imogen have a great relationship. I look forward to more of their antics in the next book.

I was provided a copy to read.