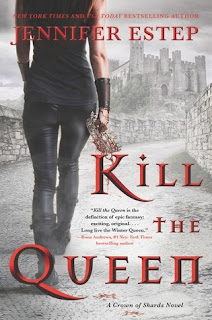 Kill the Queen by Jennifer Estep
My rating: 5 of 5 stars
Amazon

Gladiator meets Game of Thrones: a royal woman becomes a skilled warrior to destroy her murderous cousin, avenge her family, and save her kingdom in this first entry in a dazzling fantasy epic from the New York Times and USA Today bestselling author of the Elemental Assassin series—an enthralling tale that combines magic, murder, intrigue, adventure, and a hint of romance

In a realm where one’s magical power determines one’s worth, Lady Everleigh’s lack of obvious ability relegates her to the shadows of the royal court of Bellona, a kingdom steeped in gladiator tradition. Seventeenth in line for the throne, Evie is nothing more than a ceremonial fixture, overlooked and mostly forgotten.

But dark forces are at work inside the palace. When her cousin Vasilia, the crown princess, assassinates her mother the queen and takes the throne by force, Evie is also attacked, along with the rest of the royal family. Luckily for Evie, her secret immunity to magic helps her escape the massacre.

Forced into hiding to survive, she falls in with a gladiator troupe. Though they use their talents to entertain and amuse the masses, the gladiators are actually highly trained warriors skilled in the art of war, especially Lucas Sullivan, a powerful magier with secrets of his own. Uncertain of her future—or if she even has one—Evie begins training with the troupe until she can decide her next move.

But as the bloodthirsty Vasilia exerts her power, pushing Bellona to the brink of war, Evie’s fate becomes clear: she must become a fearsome gladiator herself . . . and kill the queen.

Kill the Queen is an action-packed fantasy novel filled with magic, deception, death, romance, action, and strategy. Lady Everleigh Winter Blair is an orphaned royal family member whose parents were murdered when she was young. After finally landing at Bellona, Evie might have grown up among royalty, but she was never really accepted and spent most of time alone. She spent a lot of time watching those around her tried to curry favor with the Queen by any means possible. Evie quickly learned to hide her unusual immunity to magic. Her hidden talent is what saves her life when her power-hungry cousin, Vasilia, murders her own mother the Queen, siblings, and anyone even remotely related to her. Vasilia’s thirst doesn’t end with taking the throne either – she wants it all – and prepares to take it by any means necessary.

Fortunately, Evie escapes and she finds herself seeking out the gladiator troupe located just outside of Seven Spire. She comes face-to-face with Lucas Sullivan and doesn’t make a very good first impression. Evie and Lucas spend a lot of time unable to move past their first impressions of one another, but they slowly start warming up to each other. What transpires is a tale that takes an almost invisible member of the royal family and builds her up, strengthens her, and unleashes her on an unsuspecting world. Evie transforms so fully that she is clearly not the same woman at the end of the story that she was at the beginning. The author did a great job evolving Evie, developing and shaping her into a warrior.

I have enjoyed every book I’ve read by Jennifer Estep. Her stories are fascinating, full of action, and engaging. Kill the Queen is a well-written fantasy novel with wonderful characters and detailed world building. The story played out like a movie as I read. The book has a killer cover and intriguing synopsis and I was pulled in from the start.

I was given a paperback copy of the book to read.