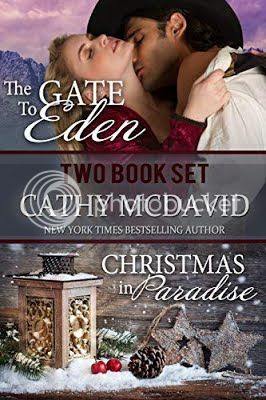 About The Gate to Eden:

STEALING HIS HEART. Crack shot Maddie Campbell isn't your ordinary thief. She'll do she'll do anything to insure the safety and survival of her young daughter and the three hundred other widows and orphans left homeless and penniless after a horrific mining accident—including convincing those responsible for the accident to "donate" to the cause. Maddie and her merry band have been getting cleanly away with their thefts until the day former sheriff Scott McSween arrives in town.

He's been hired by the mining company owner to bring an end to the crime spree. Despite her efforts to throw him off track, he's convinced Maddie is connected to the robberies. Determined to draw out all her secrets, he plies her with soft caresses, passionate kisses, and nights spent exploring her body in ways no man has previously dared. But when confronted with a truth that can't be denied, Scott must choose between the woman he loves and the law he's sworn to uphold.

About Christmas in Paradise:

The 1916 holiday season doesn't make everyone in the desert community of Paradise, Arizona happy. Millie Berinhard dreams of an impetuous suitor who will sweep her off her feet with grand gestures. Steady, dependable William Dunlap is nothing like Millie's ideal man. Or is there more to him than meets the eye? 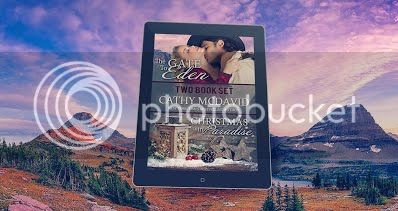 THADDEUS NEWLIN DIDN'T LIKE prostitutes. He'd worked too hard and too long building his empire only to risk losing it by succumbing to some dreadful disease acquired from a barroom whore.

He did, however, like women and partook of their pleasure as often as his pressing schedule allowed. Young women with long hair, ample curves, and clear skin were his preference. And innocent — if only in looks. No soiled doves ever found their way beneath his blankets.

His secretary, Zachariah Forrester, had assumed the task of procuring this evening's entertainment, as he always did when the mood for companionship struck Thaddeus. Mr. Forrester recruited from the residences and ranches of whatever town they happened to be visiting. As times were tough and money tight, he seldom encountered any difficulty locating a willing female who fit his boss's exacting specifications. Then, like all good secretaries, he conveniently disappeared for several hours after escorting the young woman to the steps of Thaddeus's private railroad car. Neither did he ask any bothersome questions at the end of the night, regardless of the woman's disheveled condition.

“Very nice,” Thaddeus said as he watched the pretty little thing standing in front of him slip the narrow sleeves of her camisole off her pale shoulders. Mr. Forrester had done well tonight, and Thaddeus considered giving his secretary a bonus.

“I ain't never been with a man like this before,” the woman said shyly, lowering her eyes to the richly carpeted floor. “You're my first...you know.”

Thaddeus doubted the truth of her statement. She might not be a prostitute in the strictest sense of the word, but she'd certainly done this before. The large nipples visible through the material of her camisole and the roundness of her belly attested to previous childbirth. Not that Thaddeus cared. In fact, he preferred experienced women. Just not worldly.

“You don't have to be nervous, my dear.” He played along with her pretense. “I promise to be gentle.” And he would be gentle. Until the end.

She lifted one stocking clad foot and placed it on the edge of the pinstriped settee, near to his leg. Thaddeus felt himself stirring and smiled. He might be past his prime and have only half the hair atop his head he did at twenty, but he'd not yet lost his ability to perform.

Reaching out a large hand, he stroked her smooth, and surprisingly muscular, calf. “Why don't we see what we can do about removing this stocking?”

The woman — he couldn't quite remember her name — pressed a knuckle to her lips. “It were a long walk here from my place. Can I use the...the...chamber pot first?” It clearly pained her to have to ask for the convenience.

“Of course. It's in there.” He pointed toward a door leading to his sleeping quarters.

She ducked behind the door, quiet as a mouse. No sense wasting time, Thaddeus thought and kicked off his boots. Next, he stood, removed his pants, and tossed them aside. They landed haphazardly on the elegant cherry wood rocker he'd had shipped all the way from Boston last year. By the time he completed undressing, he'd begun to wonder what was detaining his lovely guest.

Wearing only his long underwear, he walked to the door of his sleeping quarters and knocked. “Are you all right, my dear?”

His only answer was a soft scuffling sound.

“Hello.” He knocked again, and the brass knob twisted. Thaddeus smiled and moved away from the opening door. “There you are.”

The door swung wide, and the smile on Thaddeus's face died as the end of a Colt revolver was jammed into his protruding gut. 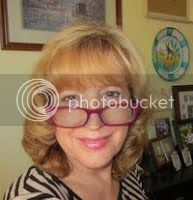 As a sophomore in high school, NY Times, USA Today, and Amazon bestselling author Cathy McDavid won a local writing competition with her self-illustrated children’s book. Who knew that small triumph would eventually lead to a career writing contemporary romances with over 1.3 million books sold? With forty-four titles to date, Cathy is also a member of the prestigious Romance Writers of America’s Honor Roll. This “almost” Arizona native and mother of grown twins is newly married to her own real-life sweetheart. After leaving the corporate world three years ago, she now spends her days penning stories about good looking men who ride the range or fight fires or wield hammers while sweeping the girl off her feet. It’s a tough job but she’s willing to make the sacrifice.