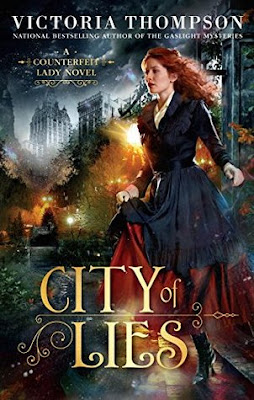 Elizabeth Miles scours 1920’s Washington, D.C. for a killer in the first Counterfeit Lady novel from the author of the New York Times bestselling Gaslight mysteries.

Like most women, Elizabeth Miles assumes many roles; unlike most, hers have made her a woman on the run. Living on the edge of society, Elizabeth uses her guile to relieve so-called respectable men of their ill-gotten gains. But brutal and greedy entrepreneur Oscar Thornton is out for blood. He’s lost a great deal of money and is not going to forgive a woman for outwitting him. With his thugs hot on her trail, Elizabeth seizes the moment to blend in with a group of women who have an agenda of their own.

She never expects to like or understand these privileged women, but she soon comes to respect their intentions, forming an unlikely bond with the wealthy matriarch of the group whose son Gideon is the rarest of species—an honest man in a dishonest world. She knows she’s playing a risky game, and her deception could be revealed at any moment, possibly even by sharp-eyed Gideon. Nor has she been forgotten by Thornton, who’s biding his time within this gilded orbit, waiting to strike. Elizabeth must draw on her wits and every last ounce of courage she possesses to keep her new life from being cut short by this vicious shadow from her past

City of Lies is a book filled with realism and emotion from start to finish. Set during the era when women were fighting for the right to vote in the United States, City of Lies reminds us what women endured to give us equal footing in the world of politics. The author’s world building in the book is vivid and descriptive. I highly doubt any reader will be unaffected by the anxiety, suffering, and abuse the suffragists are subjected to in the first half of the book. These emotional aspects of the book were hard for me to sit and read. I skipped over much of the book set in the prison, only reading little snippets here and there in order to stay abreast with the story. This is, in no way, a negative reflection of the book or the author. It just means that I’m empathetic and the anxiety in the book caused anxiety in me. There is a reason that I don’t typically read anything like this, the Holocaust, slavery, etc. It’s not because I deny the events happened, because I know they absolutely did happen, but because I get too emotionally invested and overly emotional while reading books with high levels of injustice and mistreatment.

That said, City of Lies is a wonderful book set in a turbulent time in America. Our heroine is a con artist who works with her brother to swindle money from unsuspecting marks. Only, this time, they may have tried to steal from the wrong guy. In order to escape Oscar Thornton’s wrath, Elizabeth flees from danger right into the middle of a women’s rights march in front of the White House. If only she realized she was jumping from the frying pan right into the fire. After spending some time in jail, Elizabeth makes a few friends, whom she stays in contact after their release. In order to prevent Thornton from hurting her or her brother, Elizabeth’s deception cranks up a notch and now involves her new friends and some of their family members. Somewhere along the way Elizabeth becomes enamored with the son of one of the women from prison but he’s good and she’s a liar – how could it ever work?

The author did a great job with the character development in City of Lies, especially Elizabeth’s. She’s not exactly the same person she started off being at the beginning. She’s a strong character but you have to be if the art of the long con is your way of living. She’s also compassionate and discovers that she’s lonely not having any friends. Those she shared her jail time with become close to her and they become dear to her, as well. It is easy to identify with Elizabeth, feel her emotions and the emotions of others, and fit right into the story. There is a hint of romance in the book that is lightly touched upon but doesn’t overshadow the story. All of the characters were written well and I enjoyed each one of them.

This book is rich in emotional content and I was engaged in the story from the very beginning, despite having skimmed the prison sections of the book. After that section of the book was over, I had no problem falling right back in with the rest of the book. The story is fast paced and truly set up and executed well.

New comments are not allowed.