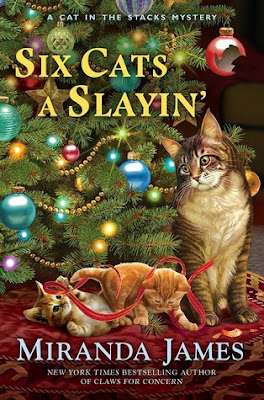 Charlie Harris and his Maine Coon cat, Diesel, are busy decking the halls for the holidays when an unexpected delivery and a shocking murder conspire to shake up the season in this all new installment of the New York Times bestselling series.

December twenty-fifth is right around the corner, and Charlie is making his list and checking it twice. He is doing his best to show some peace and goodwill toward his nosy neighbor Gerry Arbitton, a real estate agent who seems to have designs on his house (and maybe on him, as well), while preparing for a very important role, indeed—his first Christmas as a grandfather.

The last thing Charlie expects is to gain several new additions to his family. Charlie finds a box on his doorstep with five kittens inside and a note begging him to keep them safe. With Diesel's help, Charlie welcomes the tiny felines into the Harris household just as Gerry decides it is time to throw a lavish holiday party.

Determined to make her mark on Athena, Gerry instead winds up dead at her very own party. Though attempts to dig into her past come up empty, Charlie and his girlfriend, Helen Louise, witness two heated exchanges involving Gerry before her death: one with a leading citizen and another with the wife of a good friend. Will one of these ladies wind up on the sheriff's naughty list? Charlie and Diesel have to wrap up the case before the special season is ruined by a sinister scrooge.

Six Cats a Slayin' by Miranda James
My rating: 4 of 5 stars

It's Christmas time in the town of Athena, Mississippi and Charlie is getting his home ready to spend the holiday with his children, grandchildren, and friends. First, he must figure out how to contain 5 kittens mysteriously left on his doorstep. The kittens come bearing a desperate plea to keep them safe. I love how Diesel fully embraces the chaos that comes with kittens. Second, he must get through the neighborhood holiday party hosted by newcomer, Gerry Albritton. She's an aggressive real estate agent seemingly without a past. Gerry has also had her fair share of tiffs with neighbors and other prominent citizens. All is well on the kitten front, but not so much on the holiday party front, considering Gerry ends up dead at her own shin-dig.

Six Cats a Slayin' is the first book I've read by Miranda James. I received a copy from the publisher and thought "why not." I typically don't begin a series so far in but the cover and synopsis intrigued me. I love cats, cozies, and the idea of male protagonist. You see, I've not read a cozy mystery with anyone but a female lead character. What a breath of fresh air. I'm in no way saying that female protagonists are stale or boring, but that a male lead was a wonderful change of pace.

I enjoyed the multiple threads that Miranda James wove through this story. The sole focus wasn't just on Gerry and her untimely death. The addition of kittens in Charlie's life creates a hectic atmosphere that is entertaining. The author did a wonderful job tugging at the heartstrings of both Charlie and the reader where the kittens and their previous owner are concerned. We also learn a little about his family and the mother of one of his grandchildren. The author touches on a very prevalent situation that affects many mothers. The author also touches on another current social theme.

The character development was well done. Each character seemed realistic and multi-dimensional. I enjoyed the world building and was able to visualize the scenes in the book. The story is paced well; not too fast or too slow, enjoyable and full of twists and turns that will keep even the keenest mystery reader guessing.

Enter the Giveaway: a Rafflecopter giveaway
at 10:00 AM