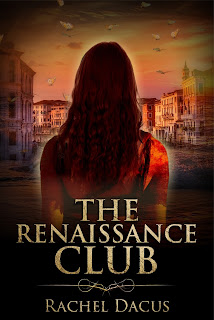 May Gold, college adjunct, often dreams about the subject of her master’s thesis - Gianlorenzo Bernini. In her fantasies she’s in his arms, the wildly adored partner of the man who invented the Baroque.

But in reality, May has just landed in Rome with her teaching colleagues and older boyfriend who is paying her way. She yearns to unleash her passion and creative spirit, and when the floor under the gilded dome of St Peter’s basilica rocks under her feet, she gets her chance. Walking through the veil that appears, she finds herself in the year 1624, staring straight into Bernini’s eyes. Their immediate and powerful attraction grows throughout May’s tour of Italy. And as she continues to meet her ethereal partner, even for brief snatches of time, her creativity and confidence blossom. All the doorways to happiness seem blocked for May-all except the shimmering doorway to Bernini’s world.

May has to choose: stay in her safe but stagnant existence, or take a risk. Will May’s adventure in time ruin her life or lead to a magical new one?

Read an Excerpt from The Renaissance Club:

THE RENAISSANCE CLUB by RACHEL DACUS – EXCERPT from Chapter 29

May was hardly back in the room when Darren called and asked her to join him at dinner. When she arrived, May was relieved to see him sitting with Daphne and Becca. There was no way she could confront him now. He was quiet at the meal, letting Becca expound on how the theatricality of the Baroque, as opposed to the Renaissance, was so very Shakespearean. As the dinner plates were cleared, Daphne insisted on taking photographs, with each standing up to photograph the other three.
Becca and Daphne then surprised May by skipping dessert and leaving.
She had to ask Darren now. It was the only time she could, and after simmering with the knowledge throughout dinner, she had a drumbeat of “Why did you do it?” on her brain.
“Darren, why did you tell Norman to fire me?”
Darren seemed very surprised. “Who told you that—was it Norman? He must be confused. I told him you were thinking of trying different things, and might want a lighter load next semester.”
So, Darren had taken her offhand and stupid remark and told Norman to reduce or even eliminate her class hours.
He rushed to justify. “I said I could take care of any classes you didn’t want to pick up. Norman’s the one who got it blown out of proportion.”
“Why was it your job to tell him something I was just considering briefly? I barely make a living as it is. I need those hours.”
She could hardly look him in the eyes. This was so meddlesome and overbearing. He was used to telling her how things would be, but this was invading her decision-making. Her headache and stuffy nose suddenly overwhelmed her. Maybe it really was a misunderstanding.
She gave him the excuse. “You must have misunderstood me. I asked Norman not to lay me off. Now, I need to go and sleep.”
She stood up and was suddenly dizzy. Putting her hand on the chair back, she bent to pick up her shawl and purse. Darren leaned over and kissed her cheek. Startled, she left. Maybe he was asserting his control, making sure she understood her future lay with him. But she was too tired to think further about his motives. She staggered back to her room and was glad the others hadn’t come in yet. She lay down, her limbs burning with fatigue, and melted into the mattress.
But May was wide-awake at three a.m. She put on her earbuds so as not to wake the other women and opened her tablet. Googling “relationships,” she found a webinar called “Taking Your Intimate Relationship to the Next Level Without Involving Your Partner.” The relationship coach promised: Unleash his instinct for intimacy and a ravishing relationship will be yours! But the relationship mentor hadn’t mentioned living in different centuries.
It almost seemed like she and Darren lived on different planets. He had wanted her fired. He was setting things up to make it easy to break up with her. Had she moved on? With a man long dead? How different they were. Gianlorenzo had called her Poet and had her model for an angel. Bernini’s angels were so beautiful people even had them tattooed on their bodies. Darren thought her writing was a distraction, unless it was pointed at getting an academic publication, which he knew it wasn’t. How did she wind up attracting such an ambitious and critical man?
Could she have an intimate relationship without involving her partner’s century? She fell back asleep on that question.

~ Praise for The Renaissance Club ~

Enchanting, rich and romantic…a poetic journey through the folds of time. In THE RENAISSANCE CLUB, passion, art, and history come together in this captivating tale of one woman’s quest to discover her true self and the life she’s meant to lead. Rachel Dacus deftly crafts a unique and spellbinding twist to the time-traveling adventure that’s perfect for fans of Susanna Kearsley and Diana Gabaldon. — Kerry Lonsdale, Wall Street Journal Bestselling Author
The Renaissance Club is a beautifully written story about a woman torn between two worlds—the present and the distant past. This time-travel adventure kept me guessing until the end about which world May would choose, and if that choice would be the right one. Highly recommended for lovers of time travel fiction or anyone looking for a compelling story about a woman trying to find happiness. — Annabelle Costa, Author of The Time Traveler’s Boyfriend

The Renaissance Club shimmers with beauty, poetry, and art. Author Rachel Dacus sweeps her readers away to Italy with her, lifting the senses with the sights, sounds, and tastes of that stunning country; imparting her deep knowledge of Renaissance and Baroque art while immersing the reader in a gorgeously romantic story. This book is time travel at its best! — Georgina Young-Ellis, author of The Time Mistress Series

Rachel Dacus is the daughter of a bipolar rocket engineer who blew up a number of missiles during the race-to-space 1950’s. He was also an accomplished painter. Rachel studied at UC Berkeley and has remained in the San Francisco area. Her most recent book, Gods of Water and Air, combines poetry, prose, and a short play on the afterlife of dogs. Other poetry books are Earth Lessons and Femme au Chapeau.

Her interest in Italy was ignited by a course and tour on the Italian Renaissance. She’s been hooked on Italy ever since. Her essay “Venice and the Passion to Nurture” was anthologized in Italy, A Love Story: Women Write About the Italian Experience. When not writing, she raises funds for nonprofit causes and takes walks with her Silky Terrier. She blogs at Rocket Kid Writing.