Book Spotlight & #Giveaway ~ Spirit of the Sea Witch (Keepers of the Stones, Book Two) by Tara West #YA #Fantasy @TaraWestauthor 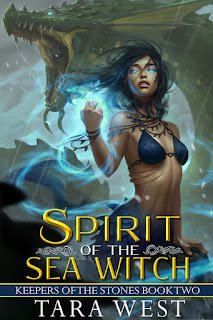 Desperate to escape the wrath of the vengeful sky goddess Madhea, a group of brave young explorers flee to the sea in search of safe haven for their people while the apprentice witch Dianna steals away Madhea’s dragon to The Shifting Sands.

Though they are an ocean apart, the future of all humanity lies within their entwined fates.

Before they can defeat Madhea, they must stop the vindictive sea goddess Eris from destroying the world.

Gorpat’s eyes flew open, and she jumped to her knees. “Fire! Fire!” She pointed to the ice dwellers, then lifted Ven out of his bedroll.
The blue man screamed, trying to swat the giant while dangling upside-down in the air.
Ryne jumped to his feet and kicked Ven’s bedroll. A red stone rolled out, its color fading to pale white as it came to rest beside Ryne’s foot.
“It is not a fire, you beast!” He pointed at the giant, his pale eyes lit with fury. “It is Ven’s warming stone.”
Gorpat’s face fell, and she dropped Ven back on the ground. He hit the dirt with a thud, cursing as he rolled onto his side.
Zier scratched the back of his head, sharing startled looks with his cousins. “Warming stone?”
Ven stood and limped to Ryne’s bedroll, scooping up the stone. “I use it to chase away the chill.”
Zier turned to Alec, an excited gleam in his eyes. “Is this stone like the one Markus used to deflect the goddess’s magic?”
Alec nodded, finally relieved he had proof his story was not a hoax. “It’s exactly like the stone Markus used.”
A chorus of excited whispers broke out as the dwarves jumped to their feet, heads bent and arms wildly waving.
Zier hobbled over to Alec, patting him on the knee. “I’m sorry for doubting you, son.”
“Why do you ask?” Ryne’s booming voice cut through the dwarves’ chatter.
All eyes shot to Ryne, and not a sound could be heard except for Gorpat blowing her nose into her sleeve. Ryne glared at them with legs braced apart, his hand on the hilt of his blade.
Zier rubbed his beard, eyeing Ryne for a long, tense moment. “How many do the ice people have?”
Ryne jutted a foot forward, speaking through clenched teeth. “Again, why do you ask?”
“I would gladly trade any of my goods for such a stone,” Zier answered.
Ven tucked the stone back in his bedroll and went to stand beside Ryne, his youthful face transformed into a mask of hard angles. “This stone has been in my family for generations and is not for trade.”
Zier rubbed his hands together. “I have spices, gold, weapons.” He waddled back to the campfire, lifting the shield with a groan. “Look at this fine workmanship.”
“Again,” Ryne boomed as the other ice dwellers rose from their beds and flanked him, “this stone is not for trade.”
“Very well.” Zier heaved an overly-dramatic sigh and lowered the shield. “But if you should change your mind—”
“Our minds will not change.” Ryne said firmly.
Alec’s breath caught in his throat at the murderous look in Ryne’s eyes, the same look the dwarves were reciprocating as they flanked Zier, their hands resting on the hilts of their swords. The dwarves outnumbered the ice dwellers seven to one, not to mention they had a giant on their side who could flatten them all into hotcakes.
Brendle ran behind Des, shaking as if he’d just been pulled from an icy river. Tar stood between the dwarves and Ryne, dancing on his paws.
“Come here, Tar!” Ryne growled.
Tar nuzzled Grim’s hand before slinking over to Ryne, his tail between his legs.
The dog didn’t want to see his master fight with the dwarves, and neither did Alec. He had to think of something, and fast, before their disagreement escalated.
He stepped between the dwarves and Ryne, holding up both hands. “Why don’t we all get some sleep?” He did his best to keep his composure, despite the wild beating of his heart. “We can discuss the stone in the morning.”
“Are you as daft as the dwarves?” Ryne pointed at Alec with an accusatory finger. “There will be no discussion.”
“Go to bed, Ryne,” Alec spoke through a frozen smile.
“Do not tell me what to do.”
Ryne was either very stubborn, very foolish, or both. Either way, Alec had had enough of his temper. Balling his hands, he channeled his dead father’s dark and violent moods as he stalked toward Ryne. “I said, go to bed!” He jutted a finger at Ryne’s bedroll, feeling the heat creep into his chest as he and Ryne locked gazes for several interminable, thudding heartbeats.
So enraged was Alec, he was barely aware of his own shallow breathing or of Gorpat sniveling behind them.
“Friends no fight.” the giant cried.
Alec couldn’t let Ryne win this battle of wills. As the dwarves’ grumbles grew louder, Alec knew their lives depended on Ryne backing down. 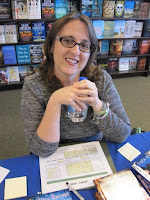 Tara West writes books about dragons, witches, and heroes while eating chocolate, lots and lots of chocolate. She's willing to share her dragons, witches, and heroes. Keep your hands off her chocolate. A former high school English teacher, Tara is now a full-time writer and graphic artist. She enjoys spending time with her family, interacting with her fans, and fishing the Texas coast. 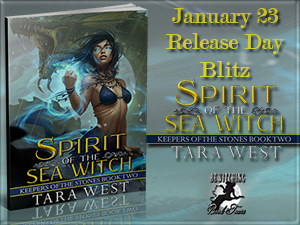