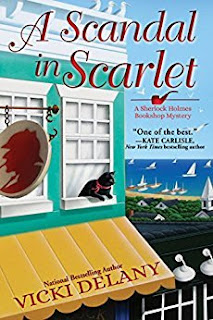 Gemma and Jayne donate their time to raise money for the rebuilding of a burned out museum—but a killer wants a piece of the auction.

Walking her dog Violet late one night, Gemma Doyle, owner of the Sherlock Holmes Bookshop, acts quickly when she smells smoke outside the West London Museum. Fortunately no one is inside, but it’s too late to save the museum’s priceless collection of furniture, and damage to the historic house is extensive. Baker Street’s shop owners come together to hold an afternoon auction tea to raise funds to rebuild, and Great Uncle Arthur Doyle offers a signed first edition of The Valley of Fear.

Cape Cod’s cognoscenti files into Mrs. Hudson’s Tea Room, owned by Gemma’s best friend, Jayne Wilson. Excitement fills the air (along with the aromas of Jayne’s delightful scones, of course). But the auction never happens. Before the gavel can fall, museum board chair Kathy Lamb is found dead in the back room. Wrapped tightly around her neck is a long rope of decorative knotted tea cups—a gift item that Jayne sells at Mrs. Hudson’s. Gemma’s boyfriend in blue, Ryan Ashburton, arrives on the scene with Detective Louise Estrada. But the suspect list is long, and the case far from elementary. Does Kathy’s killing have any relation to a mysterious death of seven years ago?

Gemma has no intention of getting involved in the investigation, but when fellow shopkeeper Maureen finds herself the prime suspect she begs Gemma for her help. Ryan knows Gemma’s methods and he isn’t happy when she gets entangled in another mystery. But with so many suspects and so few clues, her deductive prowess will prove invaluable in A Scandal in Scarlet, Vicki Delany’s shrewdly plotted fourth Sherlock Holmes Bookshop mystery.

A Scandal in Scarlet by Vicki Delany
My rating: 5 of 5 stars

A Scandal in Scarlet is book 4 in Vicki Delany’s Sherlock Holmes Bookshop Mystery series. Gemma Doyle discovers the local museum on fire while walking her dog at night. Many objects were destroyed and much of historic house is damaged. Fortunately, no one was injured since the museum was empty. In an effort to restore the building, the local shop owners come together to hold an auction at Mrs. Hudson’s Tea Room. Everyone donates toward the event but just prior to the start of the auction, Kathy Lamb, the chair of the museum board is found dead. The murder weapon? - a decoration sold in the Tea Room.

Gemma plans to stay far away from the investigation. She doesn’t even want to get involved to help Maureen Middleton, the shopkeeper from across the street, when she asks Gemma for help. Contrary to her plans, Gemma finds herself neck-deep in what is another murder mystery much to the annoyance of her boyfriend, Ryan Ashburton, and Detective Louise Estrada.

The character development continues in A Scandal in Scarlet. Gemma is painfully observant, and she tends to alienate herself and the people around her. She does so without malice and that's what makes her character quirky and lovable. The supporting characters round out this great cozy mystery. Gemma's best friend Jayne is her partner-in-crime and she has Gemma's back. Ryan is one of the police officers assigned to the cases in all four books in the series. Their relationship history sometimes gets in the way of the investigation. The chemistry between them is strong, undeniable, and believable. I enjoy their dynamics and love romances that don't take over the book but are there in the background. It makes the characters more realistic to me.

The plot for A Scandal in Scarlet was laid out well and the world building was as great in this book as it was in the previous three. I was able to visualize everything that was described, and I felt like I was there at the bookshop, tea room, and auction. The author did a great job masking who committed the murder and bringing in other contenders who had motive. I really enjoyed A Scandal in Scarlet and highly recommend the entire series to lovers of cozy mysteries.

I was given a copy of the book to read.