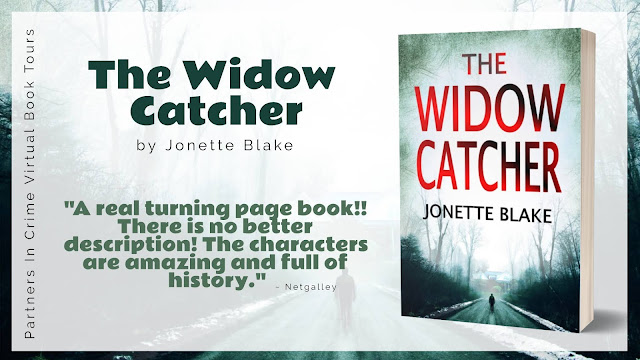 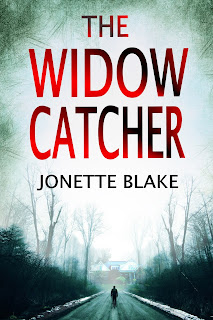 Delia Frost loves her job at the bank. She loves her customers, most of whom are elderly. She doesn’t love the idea of quitting her job to travel around Australia in a motor home with her husband who is recovering from a heart attack. And she can’t bring herself to tell him that she doesn’t want to go.

Days before she quits her job, she is invited to a book club meeting, run by a local celebrity. This seems like a beacon of hope, one last chance to do something for herself before she leaves it all behind.

But this isn’t a random invitation.

Delia has been carefully selected by a serial killer to play her part in the murders of elderly widows.

​Finding herself caught in a web of blackmail and murder, Delia is now keen to leave this town behind. But the killer doesn’t want to let her go.

Read an Excerpt from The Widow Catcher:

The setting sun cast a shadow on the headstone. A cool wind blew down the mountain. Susan Johnson tugged at her long woollen coat thinking she would soon be trading this blustery weather for tropical bliss and poolside cocktails.

She placed a hand on the headstone to steady herself and leaned over to drop a bouquet of lilies on the gravesite. She regretted not being able to bend low to lovingly place the flowers in the slot provided, but if her seventy-six-year-old body tilted even a few degrees she would topple over. It was embarrassing having paramedics lift her off the floor.

“This is goodbye for now, love,” she told the ten-years-dead occupant. “Just for a little while. I won’t be visiting because I’m off on a holiday.” She smiled and nodded. “Yes, I know what you’re thinking. I never go anywhere by myself. But I’m not going alone.”

The snap of twigs pierced the frigid air. Her grip remained on the headstone for support. But she managed to twist her head to catch a glimpse of the noisemaker.

“I won’t be long,” she told the man. “I was just telling Eric about our trip.”

The man stood with his hands thrust deep into the pockets of his trouser pants. The sunlight framed his body, and she wanted to picture him as an angel, instead the image of angry plovers at the beach protecting their nests popped into mind. The sneaky way they flew towards you with the rising sun blinding you to their attack meant you heard the click of their beaks too late.

She pushed off this sense of trepidation and the chill that followed. It was just nerves. This trip was something new for her; it was bound to give her goose bumps.

She returned her attention to her late husband’s grave. “We’re in for a storm. You’d better batten down the hatches.” She laughed gently, then her features grew serious. “My new friend has promised to take me to North Queensland. Well, to the airport at least. That’s a big help. Once I’m on the plane I’ll be fine. Ah, Eric, I’m finally going to a place where the nights are warm and I wish you could be coming with me. I’ll be gone a few weeks.”

“Susan,” her visitor called out. “I’m ready when you are.”

“We’re off to the airport,” she told the gravestone.

The day had finally arrived when she was going on holiday. Without her friend’s support, she’d never have found the courage to say ‘book it’. He’d helped with booking the flights, hotels, and the tourist destination. He’d even created a week-long itinerary. She fumbled in her pocket for it but couldn’t find it.

Where have I put it?

Never mind. Her friend would have a copy.

She was finally going to see the Great Barrier Reef. It had been a cast-aside dream until her friend had searched on the website and found a tour operator with a glass-bottom boat who specialised in trips for people with mobility issues.

“I’m almost done,” she replied, though the wind snatched away her words. Once, she’d had the strength in her lungs to be heard over an earthquake, but years of cigarette smoking had reduced her voice to an almost inaudible wheeze.

She spoke to the headstone again: “I know you think he’s only using me for my money, but he’s never asked for any. He’s not like that.” She patted the headstone. “I’ll bring you back a present.”

She hobbled over with the aid of her cane to join the man.

He lifted a bouquet of flowers from a shopping bag at his feet. “I brought something to show my respects,” he said, thrusting them at her.

Yellow roses were her favourite; they’d be wasted on Eric. Her late husband wouldn’t have known a rose from a weed.

The man smiled at her. “Will you place these on his grave for me?”

“I thought you said we were in a hurry.”

“I said we don’t want to be late. We have time to say our goodbyes.”

She glanced back at the gravesite. There was a lot of uneven lawn between here and there. Her cane had sunk into the dirt already and almost tripped her over a dozen times.

“You should take them yourself,” she told the man.

“Susan, I feel downright scandalous taking his wife to the airport for the first real holiday of her life. I can’t go over there and rub this in his face. Even in death, a person has dignity. My mother used to tell me that all the time. She was a nurse at a hospital in Sydney. Saw people dying every day. A lot of elderly people, too. The stories she told me of comfort she gave them in their final years has made me the compassionate man I am today.”

Susan knew a snow job when she heard one. She was old, arthritic, deaf in one ear, probably riddled with emphysema, but she was not stupid. Still, a sense of gratitude swept over her. She would have been locked inside the aged-care facility forever if her young friend had not convinced her to do something adventurous with the remaining years of her life.

She gripped her cane in one hand and the yellow roses in the other and set off across the uneven lawn.

“Be sure to inhale the perfume before you place them on the grave,” the man called out. “I asked the florist to select the most delectable bunch.”

Susan stopped and pulled the bouquet closer to her face to take in the scent. This bunch was strong. Probably perfumed. Everything was perfumed these days: soap, washing powder, toilet paper, tissues. As if the big companies could convince the population that life smelled like roses, therefore it must be roses.

She took a deep breath. This was a strange scent. Stronger than most. Not rosy at all. More like yellow jonquils. They had a stink that could cause nostril hairs to fall out.

She coughed on the odour. Her cough turned into a fit, one that fifty years of smoking ensured would bring a crushing pain to her chest.

Then her head began to swim. Her vision blurred. Her chest should have gulped for air. Instead it felt like it was sealing itself shut, jam-jar tight.

She twisted and tried to run toward the man who was still dappled in hues of orange and pink as the sun set behind him. She called out for help but her voice was lost. She couldn’t move.

The cool wind raced along her body like a knife, except this wasn’t the wind. This was an invisible chill attacking her veins.

Her limbs grew weak. She lost her grip on her cane.

A stroke? A heart attack? Years of being warned about the impact of smoking did not lessen the shock that it was actually happening.

Unable to support herself, she fell to the ground.

“Help,” she called out, though her voice was barely above a whisper.

The sun was setting faster now. Her visitor was now a dark, ominous shadow.

A shadow that wasn’t rushing to help her.

He should have grabbed his phone and called for medical help.

He should have raced over to her and administered first aid.

He should have done something.

Instead, he stood at the edge of the cemetery with his hands thrust in his pockets, rocking back and forth on his heels.

“Help,” she spluttered in between chest-breaking coughs.

She couldn’t get enough air into her lungs.

The man still did not make any movement to help her.

At last, he walked towards her and knelt down to stare into her face. His stare was vacant, expressionless, and when he tilted his head and frowned, she realised it wasn’t a vacant stare, but one of curiosity.

As if he’d never seen someone die before.

She reached for his hand.

He reached out for her.

His hand moved to the left toward the flowers. She noticed he wore gloves.

Had he been wearing them earlier?

The bouquet of flowers were pushed closer to her face. The pungent stench had lessened, as if her senses had adapted to the stink. More likely they were numbed by something else. Chemicals.

Now she recognised the scent. It was…

Sharp pain shot throughout her body. Her muscles contorted. Her vision blurred.

She saw his shadow fade away.

And then everything went dark.

Jonette Blake writes supernatural thrillers and suspense thrillers. She is the author of over ten books and dozens of short stories, writing as D L Richardson.

She was born in Ireland and grew up in Australia. She lived through the 80s and music is still a big part of her life. When she is not writing, she plays her piano and guitar, listens to music, reads, and enjoys the beach.

​She has held jobs in administration, sales and marketing, has worked in HR, payroll, and as a bank teller. Her latest novel The Widow Catcher is based on the coastal town she lives in and her own bank teller experience.

Her books are standalone titles.

This is a rafflecopter giveaway hosted by Partners in Crime Virtual Book Tours for Jonette Blake. There will be 1 winner of one (1) Amazon.com Gift Card. The giveaway begins on February 1, 2021 and runs through March 2, 2021. Void where prohibited.