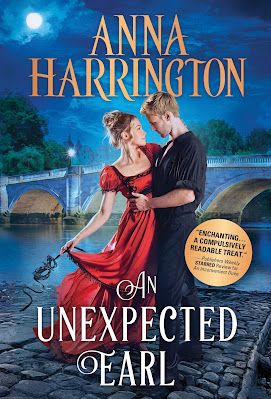 Twelve years ago, former brigadier Brandon Pearce had to give up the girl he loved, Amelia Howard. Now he’s the Earl of Sandhurst, but committed to stopping a criminal group that’s threatening the lives of innocent people. Amelia’s brother is in their clutches, and Pearce has to navigate the slippery slope of being back in Amelia’s life without telling her what he’s really up to.

But he’ll have to deceive her first...

Amelia is now a grown woman with a past she desperately needs to keep hidden in order to save her brother Frederick’s reputation. She’s shocked to discover that Frederick is being blackmailed—and heartbroken that, despite his protestations, Brandon Pearce appears to be on the wrong side of all this.

Pearce is playing a deep game to further his investigation, but he’s willing to do anything for a second chance with Amelia, even when he discovers she has secrets of her own…

Anna Harrington is an award-winning author of Regency romance. Anna was nominated for a RITA in 2017 and won the 2016 Maggie Award for Best Historical Romance. The Secret Life of Scoundrels. A lover of all things chocolate and coffee, when she’s not hard at work writing her next book or planning her next series, Anna loves to fly airplanes, go ballroom dancing, or tend her roses. She is an English professor in Chattanooga, Tennessee.

“You’re soaked through and freezing because of me. I can’t stop you from putting yourself unnecessarily at risk—” When Amelia opened her mouth to protest that, Pearce cut her off. “But I can save you from catching your death of cold.” He put his hands on his hips in a commanding pose that showed him as the no-nonsense brigadier he’d become. “Now, take off that dress.”

She refused to move and silently returned his stare. To be honest, the thought of taking off her wet clothes and finding something dry to put on tempted her. Greatly. Especially since an icy puddle was spreading around her feet at that very moment. But she’d never give him the pleasure of admitting he was right about—

A violent shiver shuddered through her so hard that her teeth chattered.

Pearce leveled an I-told-you-so gaze on her that had surely made his subordinates quake in their boots.

“Fine.” With no other choice, Amelia grudgingly turned her back to him. “But I have no maid here.” She tried to inject as much irritation into her voice as possible, so he wouldn’t suspect how the thought of undressing in front of him twisted her belly into an aching tangle of desire. “So if you want me out of this dress, then you’re going to have to help me.”

Her wet hair had tumbled down from the chase, and she lifted it off her back, out of his way, with trembling hands.

When he reached for the row of tiny buttons on her back, she closed her eyes, willing her breath to remain steady, her pulse calm. One by one, the buttons slipped free, and her bodice loosened.

“This is necessary,” he explained, misreading her protests. “You’ll never warm up as long as you’re in this wet thing.”

She bit back a distressed laugh. “And here I thought you were simply attempting to see me naked.”

She could almost hear the rueful twist of his lips. “I’ve undressed you before, you know.”

“When I was nine.” A strained quality laced through her suddenly hoarse voice. “We’ve changed since then. If you persist in this folly, then we’ll both find out exactly how much.”

“It isn’t folly.” He lowered his mouth over her shoulder. “And believe me, Amelia,” he murmured, his breath tickling her ear, “I know exactly how much.”

Foolish longing ached at the back of her weakening knees.

“All done.” The last button slipped free, and her bodice drooped low down her front.

She grabbed at it with both hands to keep it in place as she whirled around to face him. “This isn’t at all prop—”

Her chastisement died beneath his stare. Instantly, her anger was replaced by something else just as fierce. Something that pulsed achingly and made goose bumps spring up across her wet skin, that longed to have his hands running all over her and hers over him. His skin would be just as wet and cold as hers, she knew, but he would also be warm beneath, with smooth skin over hard muscles. The young lad she’d once loved was still there, ready for her to make love to him—

She bit her lip to fight back a groan. Damn the man for making her want him!

Did she need… Yearning pulsed through her, and she squeaked, “Pardon?”

“To remove the rest of your clothes.”

And that sent a wicked spiral of wanton desire shooting right out the top of her head.

Her hand tightened its hold on her bodice as she somehow remembered to keep breathing. “I–I can manage the rest on my own, thank you.”

“Including your corset?” His gaze scorched over her, as if he could see right through her dress.

“Yes,” she breathed out. Her confused brain swirled. Had she just answered his question…or given permission for him to remove even more of her clothing? To do more with her than simply look?

“All right.” But he didn’t turn his back to give her privacy. The rascal didn’t even look away. His eyes remained on her as she stood there in the firelight, her skirts clinging to her hips and legs. “Are you certain?”

“No.” She wasn’t certain about anything when it came to this man…except that he made her feel beautiful. Desirable. Alive.

Was it wrong to let him stir these feelings inside her, to luxuriate in them and the memories of how wonderful their friendship had once been? After all, it was only undressing, and only to keep her from catching cold. A completely practical, not at all sexual reason. As long as nothing intimate happened between them, there was no harm in removing her dress to warm herself, no harm in letting those feelings wash over her.

Apparently, she was now lying to herself.

Yet Pearce kept his distance, and she kept her gaze locked with his as her trembling fingers pulled at the cap sleeves of her dress and tugged them down her arms. The bodice came next, peeling down to her waist and then over her hips and thighs. She pushed the wet material to the floor, then stepped out of both it and her shoes. His eyes never left hers, even as she reached behind her back for her corset and tangled her shaking fingers in the lace. A tug untied the bow. She removed the corset and let it fall to the floor, leaving her in nothing but her stockings and wet shift.

From several feet away, she saw the undulation of his throat as he swallowed. Hard. But his eyes stayed fixed on hers.

“I think you have to agree,” she half whispered, her voice a hoarse whisper, “that a lot’s changed since I was nine.”

A moment’s hesitation…then temptation won, and he dragged a deliberate gaze over her. The wet shift clung to her body, the material surely translucent in the firelight and revealing everything underneath. This time when she shivered, it wasn’t because she was cold.