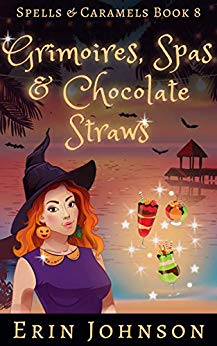 Sandy slaughter. An enchanting suspect. Can a magical baker protect her friends from a dangerous paradise?

Stranded on Badlands Island, Imogen Banks is driving herself crazy looking for her brother. So when the spell-casting baker's friends suggest they escape for a luxurious dragon spa treatment, she doesn't need a second invitation. But her hopes for coastal romance with Hank fall flat when a resort guest turns up roasted in the sand.

Suspecting murder, Imogen zeroes in on the town's rumored "black widow" as a possible culprit. But when her friend falls for the beautiful woman despite the deadly track record, Imogen fears he'll be the next victim to stay buried.

Can Imogen sift through the clues before the killer gives her one final treatment?

Grimoires, Spas and Chocolate Straws is the eighth book in the Spells and Caramels delightful paranormal cozy mystery series. If you like endearing heroines, a touch of romance, and unexpected twists, then you’ll love Erin Johnson’s magical whodunit.

Imogen and her friends are going to be on Badlands Island for the foreseeable future. To keep from going crazy, Imogen friends agree to go with the guards to a resort town to help distribute tea to the locals while the guards protect the fishermen. When a man indulging in a signature spa treatment is found dead and the owner of the spa is Sara, the infamous black widow, Imogen can’t help but get involved, especially since her friend Yann shows an interest in Sara.

Grimoires, Spas, and Chocolate Straws was a little bit slow for me at the beginning. It wasn’t until after they reached the resort town and the death occurs that the pacing of the book picked up. The characters are delightful as ever and we get to meet new people and get reacquainted with Horace. His conversation with Imogen is pretty sad and I felt really bad for the life he’s had to live for so long.

Spells and Caramels is a really enjoyable cozy mystery series. There are now eight books and the author still manages to keep things fresh and interesting. Imogene, Hank, Maple, and Sam, along with all the others, are well developed characters. They aren't flawless characters but that's what helps give them, and the story, so much charm. The continued world building describes scenes very well and the continues character development helps the reader develop deeper connections with the characters.

Imogen's character is fun and caring with a bit of emotional baggage making her a very realistic, likable, and interesting character. She has embraced the magic she was born into and she's continually trying to harness and use the magic. Imogen and Maple are wonderful, and I love their friendship. Iggy the flame is the best! He's mouthy but Iggy and Imogen have a great relationship. Hank and Imogen’s relationship continues to grow and strengthen even though they are far from home. I look forward to more of their antics in the next book.

I was provided a copy of this book to review.