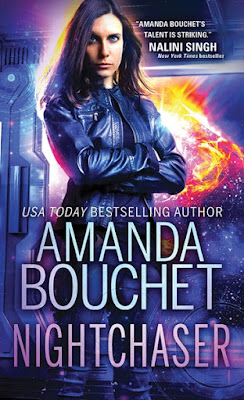 Tess Bailey: the galaxy's Most Wanted.


Captain Tess Bailey is in deep trouble. She and her crew are on the run, pursued by a tyrant who'll take them dead or alive. Tess's best hope is a tall, dark, and much-too-appealing stranger, Shade Ganavan, who says he can help her. But his motivations are far from clear...

Shade Ganavan: arrogance, charm...and that special something that makes you want to kick him.

With the dreaded Dark Watch closing in, what Tess and Shade don't know about each other might get them killed...unless they can set aside their differences and learn to trust each other before it's too late.

Shade flipped the sign to Closed and locked the door. He didn’t care who might need a spare part today, tomorrow, or any day. He cared about Tess Bailey and her little stream of lies.
Unexpected asteroid belt. He shook his head.
Under her pale skin, her firework of a blush, and her rabbiting pulse, there was a woman running scared. She looked like she’d been that way for a while, like she never stopped. Never came down. No one got that white unless they spent all their time in the Dark.
Shade’s blood still pumped harder than usual from certain parts of their exchange, and something a little crazy had happened in his chest when she’d looked so terrified of the Dark Watch. Her poker face had sucked, but then she’d managed to pull it together and be as cool as a cloud after the initial shock and assessment had passed.
He’d seen that there had been just one soldier, a man like any other poking around the shelves. A lot of the men and women who joined the galactic military wore their uniforms all the time because it gave them a power trip—always knowing people would get out of their way, say they were right, and look at them like they were a sight. The guy probably hadn’t even been on duty, not if he was shopping for razors in the seedy district around the docks.
Shade had been testing her when he’d said the Dark Watch had followed her into his shop. And her reaction had told him exactly what he’d wanted to know—she was definitely in the hot seat right now.
But he’d gotten more than he bargained for. Her chest had stopped—no breath—and her blue eyes had gone so wide they’d practically swallowed him whole. And then she’d asked the same question he would have. Uniform? Not how many, but what echelon. She’d wanted to know if there was someone important at her back.
Some of the blood had come back into her face when he’d said the uniform was black, which meant that whoever was looking for Tess Bailey wasn’t just some grunt solider; he or she was a higher-up.
But the savvy space rat hadn’t taken his word for it, had she? She’d held up that cartridge box to use as a mirror and checked for herself. She’d made sure it wasn’t someone who knew her, and then she’d paid for her bullets like nothing had happened, even getting all high and mighty again when he’d teased her about walking off with the ammo.
He had no idea why he’d done that.
Shade ran a hand through his short hair, still not used to feeling it so close to his scalp. The movement wasn’t very satisfying without anything to shove back.
He strode into his office, still seeing the freckles across Tess’s nose. They weren’t very dark; she’d have needed more sunlight for that. She also had a few on her chest. They’d looked like a constellation, a pattern to follow between her straight collarbones and the upper swells of her breasts.
Tension like he hadn’t felt in a while whipped through his body. Rosy lips and a cute ass were just the start of it. He hadn’t been crass enough to add NT to the acronym, but he’d noticed her nice tits as well.
Shade frowned as he tugged out his chair. She was attractive all over, but blue eyes, freckles, and an atomic blush were what had left him feeling like he’d been punched in the chest.
Sitting at his desk, he pushed aside the remnants of the late lunch he’d been eating when Tess had come in and then powered up the tablet that might give him some answers about his latest guest. While it got going, he rummaged through some paperwork, not really seeing it. He was still too focused on the way Tess had frozen, going from a little flirty and confused to petrified all at once.
Who had she pissed off? Some galactic officer? Was she a deserter? A rebel? Despite not having much of a game face, she’d seemed ready to put up a good fight.
And then there was the fact that she’d bought ammunition, when not that many people had guns. LW-9 bullets were for Grayhawks, and there was nothing illegal about buying them, but it sure as hell raised questions in his mind.
Shade wanted to call her scrappy, but it didn’t quite fit. For the spirit maybe, but not for the physical part. She’d been tall and strong and fit. Her eyes had looked older than the rest of her, though, like she’d already been to hell and back and made choices most people never had to face.
Determined. That was it.
She’d looked like she could take care of herself. So why did he have this itch under his skin, like he wanted to make sure she wasn’t in trouble too deep?