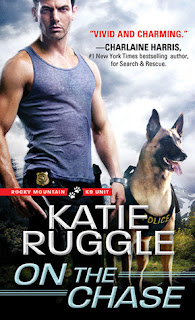 Injured in the line of duty,
His orders are simple:
Stay alive.


But when a frightened woman bursts into his life, Hugh and his K9 companion have no choice but to risk everything to keep her safe.

Because Hugh is tall, dark… and nothing but trouble.

On the Chase by Katie Ruggle
My rating: 5 of 5 stars

On the Chase involves Hugh, one of Theo’s partners from book 1. He’s been injured and no longer on street. Sitting behind a desk with his K9 partner is pretty boring but running into the new occupant of Jules’ home brightens his day. She beautiful, mysterious, and lights up like a firecracker with his teasing.

Contacting the same person who relocated Jules and her family, Kaylee has become part of the large family in the rundown house in a small Colorado town. Known as Grace, she’s trying to make her way in unfamiliar waters with a hotter-than-sin cop watching her every move. Their slow boiling attraction increases intensity with one passion-filled kiss and just as quickly cools right off when someone takes a shot at them.

I enjoyed the content, the pacing, characters, and world building. There is character development but keep in mind that Grace (along with Jules and her family) is harboring a huge secret and to let anything slip, especially to a cop, could be disastrous. The dynamics between the three cops in the series are wonderful. They truly are brothers in all ways that matter whether they are sporting the uniform or not. Jules and her family accepted Grace immediately and she became one of the family.

There is continued character development in On the Chase with both the new character and everyone we met in book 1. I was able to feel the emotions of the characters - Grace becoming accustomed to her new home, anxiety over being discovered by those hunter for her, Hugh’s feelings for Grace, and the continued build-up of Jules’ situation. The world-building also allows for clear visualization of the story as I read along. I enjoyed another action and emotion-filled novel by Katie Ruggle.