Trust with Hearts ‒ Behind the Scenes… by Kelli A. Wilkins @KWilkinsauthor 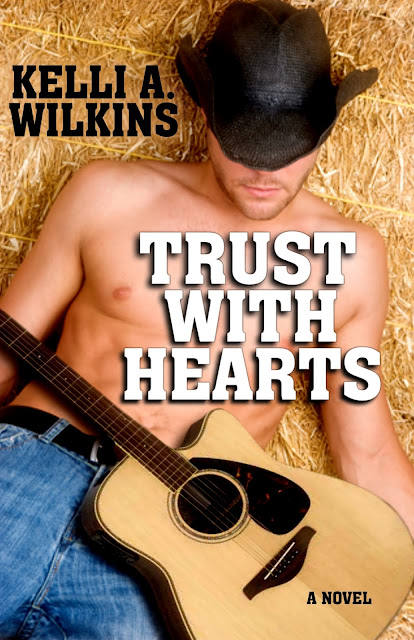 Trust with Hearts ‒ Behind the Scenes…

by Kelli A. Wilkins

Today I’m sharing a look at the making of my latest contemporary romance, Trust with Hearts.

Readers are always curious about how books “happen” ‒ how do they start out as a random idea and become an actual book, filled with great characters, drama, and sizzling love scenes? The answers vary, and each novel comes to me in a different way.

How did Trust with Hearts come about? Is the sexy and sultry Curtis based on a particular country music celebrity? Here’s the scoop…

The idea for Trust with Hearts came to me before a country music concert. I was sitting in the front row before the show started, when all of a sudden the whole plot and all the characters jumped into my head. Naturally, I started scribbling down notes (on the back of an envelope, of all things!) before the house lights went down.

Although inspired by real-life, the character of Curtis isn’t based on that one particular country music superstar – rather, he’s a blend of three or four cowboy-hat-wearing singer/songwriters. Elements of the “inspirational” singer are there, but I used my imagination to fill in background details and invented whatever else I needed to make the story work.

Trust with Hearts is a bit different from my other romances in that it has a more “traditional” romance novel feel – but still contains plenty of heat. Although Sherrie and Curtis are attracted to each other, they’re total strangers and are hesitant about getting involved in a relationship. They’ve both been unlucky in love, and aren’t sure if giving their hearts away is even worth the time or trouble.

The book gives them the whole summer to get to know each other. Readers peek into their troubled pasts and follow along as Curtis and Sherrie heal their hearts, love, and learn to trust again.

The subplot of the book – Sherrie’s devotion to save Kitty Corner – was crucial because I wanted to give her a purpose, something to build her self-esteem. Sherrie’s cat adoption project lets her help unfortunate cats who need rescuing and good homes. It parallels how Dave takes Sherrie in (aka “rescues” her) and gives her a second chance at a new life.

And, on a more personal note, giving Sherrie the “job” of helping cats allowed me to make a social/personal statement. I’m a cat person and I’ve written three cat care books. I always advocate adopting pets (of all kinds) from shelters and giving them a real home. (Would you want to live out the rest of your life in a wire cage?)

Back on topic: Knowing how I often write sequels, a reader asked if there will be another book following up Trust with Hearts. Will Dave get his own story?

I do have an idea for a sequel in mind. What if Curtis’s cousin Jen suddenly had to move in with Dave? Hmm… I already have a plot brewing in the back of my mind, so if readers would like to see a follow-up story, let me know!

And here’s a little-known fact: Once upon a time, Trust with Hearts had an entirely different ending. Curtis and Sherrie were driving back to Dave’s house when they got into a car accident. The Ventura was demolished, Sherrie was thrown clear, but she had to go back into the burning car and rescue Curtis. I opted to delete the “car wreck” chapter after several people told me it felt too “tacked on” and was depressing. This version of the story has a new epilogue, and readers can see that Sherrie and Curtis are certainly living happily-ever-after.

I’m glad to say that the book has received some great reviews:

“Trust with Hearts is a must read. You will laugh, cry, and in the end, you will totally fall in love with the story. It is character rich, and full of drama along with some sizzling scenes to spice it up. The relationship with her characters helps us see that Curtis and Sherrie may not make it, but then, as the drama unfolds, and she shows us their hearts, we realize there just may be more there than meets the eye. This book will remain on my favorites shelf for a long while, and it is a definitely recommended read from this reviewer.” - Rose, Reviewer, Romance at Heart.com

“4.5 stars! Trust with Hearts is beautifully written. You struggle with Sherrie as she tries to regain her footing, and Curtis’s charm is intoxicating as it flows off the pages. I am always thrilled when I get the chance to discover a new-to-me author who I can’t wait to read more from.” - Emily, Reviewer, SingleTitles.com

After a bitter breakup, Sherrie Parker seeks refuge at her cousin Dave’s house in rural West Virginia. Early one morning, she runs into Dave’s other houseguest, a singer named Curtis Taylor. The last thing Sherrie wants is to share living quarters with a country music crooner – even if he is sexy, in a cowboy sort of way.

Thrown together by circumstances, Sherrie and Curtis get off to a rocky start, but soon discover they have more in common than they ever imagined. Unable to fight their growing attraction, they give in to their desires and start a sizzling summer romance.

Everything is perfect between them until Sherrie discovers that Curtis is keeping secrets from her – and his biggest secret of all will change everything. Can their newfound love survive, or will destiny keep them apart forever?

As she made her way down the hall, she saw Curtis standing in the living room near the sofa. He had dimmed the lights and lit a few vanilla-scented candles. She approached him slowly, unsure of what to say.

He extended his hand. “How about another dance, darlin’?”

Her heart thundered as she slipped her hand into his. “There’s no music.”

“Wait...” Curtis reached behind her and clicked the CD player’s remote control. An upbeat guitar solo filled the room.

As Curtis settled her to his chest, she melted against him and inhaled his cologne. After a minute, she decided to open up. “I’m a bit nervous.”

“There’s no need to be. Nothin’ will happen here that you don’t want to.”

He squeezed her closer. “Shh, move to the music. Don’t worry about a thing.”

Curtis swayed her around in time with the song. This song wasn’t as sad and lamenting as most of the other country music he had. “Whose CD is this?”

He nudged her with the brim of his hat. “Your favorite superstar, CJ.”

“It figures.” She laughed. “I guess I’m starting to like him.”

“You don’t know how happy that makes me,” Curtis said, nuzzling her neck.

The song ended, and she stayed snuggled in Curtis’s arms.

“Another dance? I’ve got lots of music.”

“Sure.” She rested her head against his shoulder as the next song started. It was a slow, haunting tale of lonesome nights.

Curtis caressed her back in time to the song and she cuddled closer. Little by little, her nervousness was fading and being replaced with a smoldering passion.

He kissed her as the song ended. She stroked his chest as their tongues entwined and hungered for more. She was vaguely aware of the songs changing as they were lost in each other. This was nice, but she wanted him to tear off her clothes and ravage her.

“I want you so bad,” she whispered, then turned away. “I can’t believe I said that.”

“It’s okay. I like a vocal girl. Don’t be afraid to tell me what you want… and like. It turns me on,” he said, as he brushed her hair to one side and sucked on her neck, making her moan. He glided his hands up her ribs and cupped her breasts through her shirt. She swayed as he pinched her nipples with his thumbs.

“Now don’t you faint on me.” He took off his hat and settled it on her head, then danced her backward until she was leaning against the wall outside the bedroom. “See if you can hold up this wall while I do sinful things to you.”

She listened to the music as Curtis unbuttoned her blouse. Her skin tingled as he parted the material. She opened her eyes and dared a peek at him. He was staring at her chest.

“You are so beautiful,” he whispered, then kissed the top of each breast.

“Should I take this off?” she asked, reaching for her bra strap.

“No, no. I’ll take care of everything. Tonight’s your night, Sher.”

I hope you’ll check it out. Trust with Hearts was a lot of fun to write and blends a sultry romance with heartwarming drama.