New Release ~ A TASTE OF PARIS: A History of the Parisian Love Affair with Food by David Downie 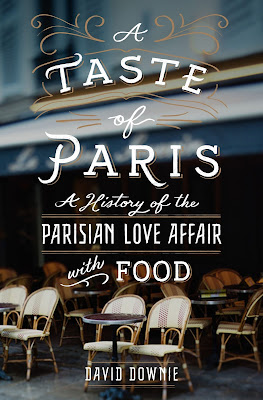 In his trademark witty and informative style, David Downie embarks on a quest to discover “What is it about the history of Paris that has made it a food lover’s paradise?” Long before Marie Antoinette said, “Let them eat cake!” (actually, it was brioche), the Romans of Paris devoured foie gras, and live oysters rushed in from the Atlantic; one Medieval cookbook describes a thirty-two part meal featuring hare stew, eel soup, and honeyed wine; during the last great banquet at Versailles a year before the Revolution the gourmand Louis XVI savored thirty-two main dishes and sixteen desserts; yet, in 1812, Grimod de la Reynière, the father of French gastronomy, regaled guests with fifty-two courses, fifteen wines, three types of coffee, and seventeen liqueurs.

Following the contours of history and the geography of the city, Downie sweeps readers on an insider’s gourmet walking tour of Paris and its environs in A Taste of Paris, revealing the locations of Roman butcher shops, classic Belle Epoque bistros serving diners today and Marie Antoinette’s exquisite vegetable garden that still supplies produce, no longer to the unfortunate queen, but to the legendary Alain Ducasse and his stylish restaurant inside the palace of Versailles. Along the way, readers learn why the rich culinary heritage of France still makes Paris the ultimate arbiter in the world of food.

Praise for the Book:

“A zesty, entertaining romp through the landscape of French food.” – Kirkus

“Truly epic, encompassing history, flavor, and passion. Bravo for a comprehensive look at eating and dining in Paris!” —David Lebovitz, author of My Paris Kitchen and The Sweet Life in Paris

“In recent years David Downie has become the go-to-guy for all matters Parisienne. In A Taste of Paris he combines his love of history, his affection for his adopted city and his passion for French gastronomy. Anyone who loves Paris (who doesn't?) and adores French cooking (who can resist it?) will cherish this authoritative book.” —Paula Wolfert, James Beard Award Winning author of The Food of Morocco and The Cooking of the Eastern Mediterranean

“A veritable encyclopedia of everything you ever wanted to know about the Parisians and their victuals. This literary tour de force turns received wisdom on its head, sprinkling the serious subject of what, when, where and how the French have eaten throughout history with many a great moment of humor and irreverence. I loved it!”—Harriet Welty Rochefort, author of Joie de Vivre

In A TASTE OF PARIS Downie asks and answers:

** The modern restaurant was “invented” in Paris, but how many people know when, exactly where, why and how le restaurant came into being?

** Was Chef Auguste Escoffier really the worst thing that ever happened to French cooking? Where did he come from, what’s his heritage is and why’s he part of the problem with French food today?

** France in general and Paris in particular pride themselves on their culinary culture—for good reason. But how much of “French” cooking came from elsewhere, was adopted and adapted then rebranded as French or Parisian?

** For centuries, Paris was the unrivaled food city of the western world. Is it still?

** When was French cuisine born? When did it emerge from the other European court cuisines, why, where and how?

** Are the French somehow naturally endowed with excellent taste and the ability to cook? Some French people seem to think so. A TASTE OF PARIS debunks received wisdom about the “innate talents” of the French and Parisians when it comes to things culinary and oenological.

** What’s the difference between a café, bistro, brasserie and restaurant and when did each arise—and why?

** Everyone knows foie gras is French, right? Right and wrong: it’s French now (though often produced not in France but in Hungary) but sure wasn’t originally. A TASTE OF PARIS gives the lowdown on this controversial delicacy from its Egyptian, Roman and Jewish roots to the present.

** Frog’s legs and snails? French? Guess again and learn the back stories on two more cult foods whose nationality might surprise you.

** Everyone loves Parisian cafes but why is Paris’ café—meaning coffee—so execrable?

** When did food, wine and sex—romance if you prefer—become the holy trinity of the Parisians?

** How did food, wine, and entertaining become highbrow activities in Paris?

** When, where, how and why did culinary criticism and restaurant reviewing come into being? In Paris, naturally. A TASTE OF PARIS takes you by the hand and leads you to the places—some still in existence—where the genres were born.

** Ever wonder why service is often brisk and persnickety in Paris? Have you squirmed upon the altars of haute cuisine in a temple of gastronomy? A TASTE OF PARIS does not excuse but rather explains where Parisian attitude comes from—and suggests why it’s on the wane.

** A TASTE OF PARIS maps out the historical progression of culinary culture through history, creating a “gastronomic topography.” Discover where ancient and medieval vineyards were, where mustard was perfected 1,000 years ago, where the first restaurant opened for business—and at the same time enjoy an irreverent insider’s guide to Paris today.

Add to your shelf on Goodreads:  https://www.goodreads.com/book/show/33574122-a-taste-of-paris

Purchase your copy from Amazon:  http://amzn.to/2xC7jV0

DAVID DOWNIE, a native San Franciscan, lived in New York, Providence, Rome and Milan before moving to Paris in the mid-80s. He divides his time between France and Italy. His travel, food and arts features have appeared in leading print and on-line publications including Bon Appétit, Gourmet, Saveur, Epicurious.com, and Gault & Millau, the premier French food guide. He is the author of over a dozen nonfiction books, including the highly acclaimed Paris, Paris and A Passion for Paris.
at 7:00 AM