A Season of Angels Series
by Christopher Stanfield
Genre: YA Supernatural Thriller, Mystery

The Girl in the Storm
A Season of Angels Book 1

Seventeen-year old Genevieve Reidell loves to paint, and values her closest friends above all, but when a gunman terrorizes her high school, her near-reckless bravery sets her on a path that will change the entire course of her life. Her best friend is shot and dying but when Genevieve holds her, the bleeding stops and the wounds close. But when she tries to save another friend, she can’t. Overcome with guilt Genevieve struggles to understand.
But when a stranger arrives at her home with a mysterious book and an ominous warning, she learns about her destiny. Angels have protected her, but the time has come to unravel the mysteries that have haunted her for years. Genevieve must learn to harness and control her gifts and accept that whatever she does might not be enough. The Devil must be stopped, and Genevieve is ready to walk into the storm. She’s cheated death before, but can she save herself again without losing those she loves?
Add to Goodreads
**Only .99 cents until the end of March!**
Amazon
Watch the Book Trailer: 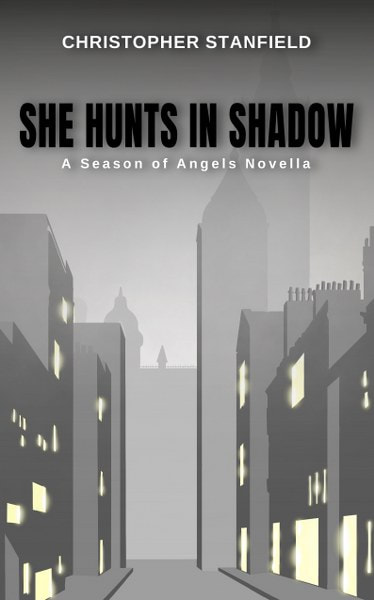 She Hunts in Shadow
A Season of Angels Novella

What comes after the Storm? The Hunt.
Genevieve’s simple life has been undone. In the wake of her fateful choice, one thing remains clear: Lucifer Morningstar must be stopped and Hell ripped beyond his reach. But to do so she’ll need a soul who knows the fetid hellscape. A Demon must be sent. A Demon she can trust. All she has to do, is find him.
There are mysteries to unravel, secrets to confront and allies in the strangest places. She knows what must be done, even if it means trusting a red-haired Demon with a sharp tongue and an annoying habit of killing first and asking questions later.
It’s a daring gamble, but with Lucifer scheming in the shadows, it may be the only play she has to make. The War for Souls will soon commence, but before it does, the hunt begins.
Add to Goodreads * Purchase from Amazon

The Woman in Darkness
A Season of Angels Book 2

The War for Souls has just begun, but time is already running out…
In the wake of one tragic, fateful night, Genevieve leaves behind every aspect of her simple life, including her name. Now she’s known as Lilith, and with the memories of her erased from those she loved, it’s as if she never existed. As she seeks her new purpose, dreams of a sad, broken woman with raven hair--- a woman in a place more terrible than nightmares--- continue to haunt her.
Madeline is a fractured soul trapped in Hell after taking her own life. Lilith believes this stranger may be the key to shattering Lucifer’s hold over that frightful realm. But to find Madeline she’ll need a soul who knows the fetid hellscape. A Demon has been sent. But he must first brave the dark of Hell and survive the madness in himself.
While Lilith sets her daring game in motion, Lucifer plots a scheme that will determine the fate of all souls, both living and in death. Lilith must get to Madeline, fast. For if she fails, there will be no end to the darkness Lucifer will bring.
Add to Goodreads * Purchase from Amazon
Watch the Book Trailer:

Christopher Stanfield is a West Texas native whose love of writing began at the age of fourteen, when inspired by a love of mythology, science fiction and fantasy, he began writing stories by hand whenever the time could be spared. After high school and a brief flirtation with college, he would spend the next eighteen years cultivating a career in Information Security at a small community bank located in his own hometown. But even then, his love of writing endured, and while dreams of characters and stories continued to occupy his imagination, he found an outlet for that creative muse by creating advertising copy for his employer. Through challenges and distractions, hard choices and the rudimentary demands of life, the dream of telling stories never waned. It was and ever remains more than merely a career. With that in mind, he enrolled in the BA Creative Writing program at Southern New Hampshire University, with an eye towards honing his craft and expanding upon his knowledge of the industry so that he might one achieve his dream of becoming published.
Website * Facebook * Instagram * Bookbub * Amazon * Goodreads

Follow the tour HERE for special content and a giveaway!
$10 Amazon,
ebook of choice from author
– 1 winner each!
a Rafflecopter giveaway