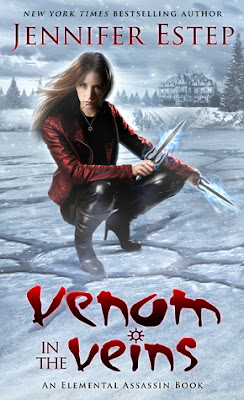 Blood might be thicker than water, but venom is stronger than just about anything …

It was supposed to be a nice, quiet, simple dinner with friends—but nothing is ever nice, quiet, or simple when you’re Gin Blanco, the Spider, notorious assassin and current queen of the Ashland underworld.

This time around, someone seems to be targeting Stuart Mosley, the president of First Trust bank. Lots of people have grudges against Mosley, but the more I investigate, the more Mosley’s problems seem to be connected to some of my own, especially when it comes to the Circle, the evil, shadowy group that is secretly responsible for much of the crime and corruption in Ashland.

But when another blast from my dark and deadly past as the Spider comes to light, I wonder if I’ll be able to survive this dangerous new enemy, who has a burning thirst for revenge that will only be satisfied with one thing: my death. When Mosley, Finn's boss, is almost abducted by muggers, Gin and Finn are in the right place at the right time. Someone is after Mosley and Gin wants to know who. At an auction of Mab Monroe's estate at the Eaton mansion, Gin gets a pretty good idea who may be involved, especially after certain details are revealed about how Mosley is involved in the care taking of the Eaton Mansion. Before the auction begins, Gin is suddenly thrust back into the past when when she comes face-to-face with an enemy. One problem - Gin killed that enemy several years ago. Now she has to figure out what is going on and how it relates to Mosley - that is, if it relates to Mosley. This newcomer is a formidable foe, having been fully trained to intimidate, stalk, and kill in the same manner as another person Gin knows. Gin certainly has her work cut out for herself. Amid the chaos, Gin is still trying the infiltrate the Circle, with an unlikely savior continually pulling her to safety. When she finally gets to put a face with the leader of the Circle, Gin's entire world shatters.

The 17th book in the Elemental Assassin series is action packed, suspenseful, and a wonderful addition to Gin's story. I found this installment of the series fresh and exciting as Gin faced the result of one of her past action actions. Gin also dug down deep in her own mind and conscience and partially blames herself for the monster she encounters in the book. She's bit more human in this book and a lot less stone-faced (pun intended) killer. I was pulled into this story and the author did a wonderful job keeping me engaged. In fact, the entire series has pulled me in and kept me engaged from the very beginning. These are the types of books that have me longing for the next one. They are written with vivid descriptions and genuine feelings, allowing the reader to become totally immersed in this world.

The twists and turns come out of nowhere and there are many surprise moments. My heart was pounding and I was on the edge of my seat through a good portion of the book. The world building continues and we learn a bit more about Gin's past and the Circle.

Even after 17 novels Jennifer Estep knows how to keep the stories interesting. I am a huge fan of the entire series.