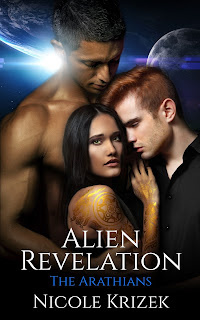 Tagline: They must act swiftly to secure their future...and that of the entire Arathian race.

Heralded as the saviors of the Arathian species for their ability to procreate with the infertile Arathians, Earthers are honored citizens on Arath. While his son and extended family seem to be enjoying their new lives on the alien planet, the young widower, Conall MacLeod, feels like he doesn’t have a purpose on their extraordinary world.

His future is forever changed when he meets an Arathian male and female who make him wish for a second chance at love. But nothing is ever easy…

Conall’s self-identity is entrenched in the idea that he’s a monogamous—and heterosexual—man, yet he finds himself unexpectedly lusting after two people, one of them, shockingly, male. He can’t deny that he craves things he’s never wanted before, but if he’s ever going to find love again, he must get past his insecurities and rewrite his own self-image.

Who are the Arathians unexpectedly turning Conall’s head, and heart?

Onalee Cormikan is the co-heiress to Cormikan Industries, the leading medical research firm on Arath, which is devoted to finding a cure for their infertility. Considered reclusive by her peers after the tragic death of her parents, she’s content to support her older brother in the search for a cure... until she meets Brogan, Conall, and his family.

They make her yearn to step out of her possessive brother’s shadow, and explore what—and who—she wants in life.

Brogan is a First Lieutenant of the Arathian Royal Guard, entrusted with the protection of Arath’s soon-to-be monarchs. Solely dedicated to his job, he never expected to find a future outside his passion for his work. Yet Conall’s internal struggles seem to stand in the way of their happy future together as a trio. It’s a good thing Brogan likes a challenge.

As the royal coronation for Princess Jayda, Prince Deian, and Prince Lukas draws near, a new terrorist organization emerges: one that threatens not only the royal trio, but all Earthers on Arath.

With the cure to Arathians’ infertility in sight, Conall, Onalee, and Brogan must do what they can to secure both their future, and that of the Arathian race.

Across the field, he saw Forkan Cormikan emerge from the gardens with a female on his arm—a beautiful female.
Brogan felt his breath rush out of his lungs as his entire being focused on the pair across the lawn. Was she Forkan’s mate? No, she couldn’t be. Brogan knew that the male wasn’t mated, and that he rarely brought dates out in public. Was this his sister? Please let her be his sister.
Her long hair was held back from her face by braids, and fell down her back in a black waterfall. She was slight in stature, and thin—as if she hadn’t eaten a decent meal in months. Her head turned, taking in the scene, and Brogan wondered what shade of green her eyes were.
He casually moved towards them—not because he felt a pull to do so. Nope. Not at all. It was his duty to keep tabs on all of the guests, including the beautiful females.
He was halfway to the pair, when Forkan broke away from her and headed towards a group of council members. The female was left alone, standing at the edge of the lawn, holding her small purse with both hands in front of herself.
Brogan stopped and pretended to be admiring the nearby foliage. He sipped his glass of water and watched the female. She didn’t seem upset that she’d just been abandoned.
Her gaze wandered over the lawn, while his eyes stayed glued to her. She was absolutely beautiful. Her skin was a light shade of tan, decorated with golden oriaglyphs that ran the length of her arms.
Oriaglyphs were extremely expensive, and few women had that level of decoration on their bodies. The golden tattoos shone in the sunlight, and seemed to make her glimmer. Brogan focused on the symbol high on her shoulder that signified her family, and was unsurprised to see the Cormikan family crest.
This was definitely Onalee, Forkan’s reclusive sister.
Brogan had long ago learned all of the Council members and their families by name and appearance, but even after the dozens of events he’d attended as a Guard for the royal family, he’d never seen Onalee in person. He remembered that she’d been home-schooled after the loss of her parents when she was practically a child. Still a young man himself, Forkan had become her guardian. She’d never gone to vocational training, like most young people, and instead had had private tutors. Now a grown woman, she didn’t have a profession, and had never mated.
Brogan couldn’t see why: she was lovely. There was no way males had stayed away from her, especially given her family’s status.
He heard a large splash come from the lake, and watched Onalee’s face light up in a bright smile. If he’d thought her beautiful standing there placid, it didn’t compare to when she genuinely smiled; it was like she was lit from within. Brogan stared, completely transfixed, as something inside of him shifted.
He reached out and grasped a nearby tree trunk to keep himself grounded. Inside, he had no clue what the hell was going on. His chest was tight, his heart hammered so hard that he was becoming lightheaded. Farther south, his groin tightened with each moment he watched the female.
Brogan closed his eyes tightly, and willed his body to gain control of itself. Nothing like this had ever happened, and he wasn’t sure if it was a positive thing or not.
Most assuredly not, he told himself. He’d gone through years of specialized training to be at the top of his profession. Nothing had ever thrown him off-kilter. Until one tiny slip of a female, he added.
Against his wishes, Brogan’s attention remained on Onalee. She spent another few moments watching the children play at the lake, before she shook herself and moved towards the food tents. 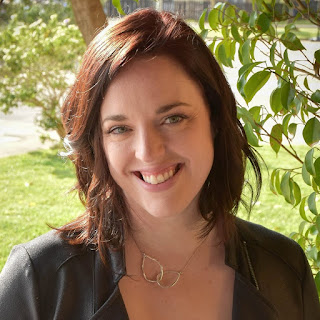 In high school she continued taking art classes and focused on music- choir mostly. Nicole was introduced to romance novels in college, which kindled her love for reading! In the years since she’s devoured hundreds of books, and although she likes other genres she always come back to romance… because the endings are always happy ones.

In 2013, after hearing her expound on her imaginative creations for years, Nicole’s husband encouraged her to write her own book. She began writing the next day and decided that she’d keep going until it wasn’t fun any longer. Three years later she’s still going!

Moving often for her husband’s work and in recent years has lived in: Texas, Oklahoma, Alaska, California, and North Dakota. Her family currently lives in Sicily, Italy. Thankfully she can write from anywhere in the world! 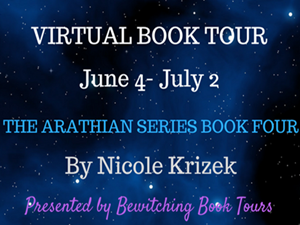