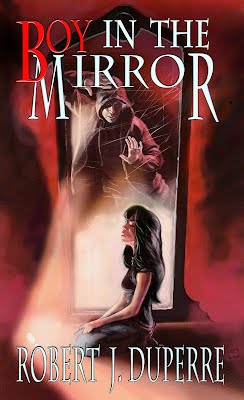 Fifteen-year-old Jacqueline Talbot’s boyfriend Mal lives in the mirror of her makeup case. There’s never been anything normal about Jacqueline; not during her time in foster care, and certainly not in her new hometown of Mercy Hills.

With rumors of actual monsters in the woods, the popular kids taking an unhealthy interest in her, and the revealing of her own dark past, all Jacqueline wants to do is run away forever with Mal. Too bad he’s trapped in the mirror.

But when she learns the ancient forces of the town want to destroy everything she loves, the race is on to free the boy in the mirror, because he just might be the only one who knows how to stop them.

Olivia tripped, falling on her rump with a yelp. Jacqueline continued to kick out her feet, trying to scurry away from the lurching monstrosity as fast as she could. She tried to get her anger to rise up again, to feel the strength of her rage as she had when Papa Gelick attacked her, but it remained hidden, locked away, out of reach. This wasn’t confronting some boisterous kid in a high school hallway. This was real. This was dangerous.

And Jacqueline was afraid.

“Get away!” Annette’s voice shouted. “Don’t come any closer!”

Jacqueline’s friends rushed forward. Ronni helped Jacqueline to her feet while Annette did the same for Olivia. Neil stepped toward the man with the knife with his phone held up, the flashlight on the back shining. The man held up his hand to shield his eyes. Jacqueline shrugged away from Ronni and joined Neil’s side, trying not to be completely terrified.

The man dropped his hand and leered at them. Neil kept his arm raised, the wavering light revealing a haggard, forty-something adult with a patchy beard, messed-up teeth, and beady eyes. The guy wore a beaten-up leather duster and grimy jeans. He took another step toward them, which prompted Neil to hastily retreat and stumble over his own feet.

“Little pig, little pig, let me in,” the man growled as Neil fell. His beady eyes shifted in Jacqueline’s direction. “Not by the hair of my—”

His mouth abruptly snapped shut, his jaw twitched, his cheeks sagged. Jacqueline froze, not sure what to do. Finally, the brute turned tail and dashed across the parking lot, looking like he was headed for the thin line of woods on the mall’s west end.

Jacqueline wasn’t sure if the danger was over. She heard Olivia sobbing behind her. “I’m so sorry…I’m so sorry…my cousin was mugged last week…what’s wrong with this town?” Jacqueline stepped toward the darkened area between the two cars, where the second shadow still lay. The victim. Jacqueline knelt on wet pavement. She touched the body, and it flinched. 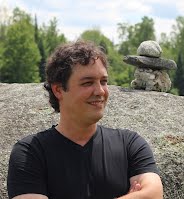 Robert J. Duperre is an author from Connecticut, the land of insurance, tobacco, and unfulfilled dreams. Over his mildly interesting life, Robert has released seven novels that skirt the line between horror, science fiction, and fantasy, as well as edited and contributed to a pair of short story collections. His novel “Soultaker” was released in 2017 by Ragnarok Publications. He also co-wrote "The Breaking World" series with David Dalglish, which was picked up and published by 47North, a subsidiary of Amazon Publishing. And all this was accomplished while living happily ever after with his wife, the artist Jessica Torrant.