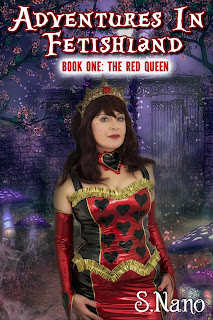 The Red Queen
Adventures in Fetishland
Book One
S. Nano

Tagline: A girl’s journey into submission in a BDSM/fetish fantasy world.

There, an intense psychological drama is played out between the two women as Kim enters a journey into submission.

Why has she been chosen to serve this powerful female? Why is the Red Queen so interested in her? When Kim finally finds out the truth, it is shocking and bizarre.


Purchase Your Copy from Amazon

Wow, this book starts off hot and it doesn’t let up for a moment – Raunchy Reader

This is a powerful read, and one that demands you submit yourself to the power of the tale– Bending the Bookshelf

This book grabbed my attention from the first page and had me staying up late in the night to read more…Uber hot book. Whew!! –Erzabet Enchantments

The metal tips of her stiletto shoes clicked against the black-and-white chequer-board floor tiles; each step instinctively, without thought or effort, alternating between black and white. As she made her stately progress across the tiled floor, she mused on the aptness of the symbolism that reflected the extremities of the world she inhabited and held sway over: darkness and light, cruelty and kindness, pain and pleasure, humiliation and reward. She commanded over her domain like a chess master playing a twisted and beautifully imagined chess game in which she, the Red Queen with a black heart, orchestrated proceedings and her slaves were pawns. She stood before her gothic mirror and admired her image reflected within its black cast-iron frame. The Queen of Hearts was ready.
“How do I look Duchess?” she asked, turning to her transvestite companion and lady-in-waiting.
“I’m speechless, madam, really I am. You look absolutely stunning, a true fetish red queen,” she answered.
She examined her image in the mirror carefully appraising every detail of her dress and make-up to ensure it met her exacting standards. She held her body upright and smoothed the shiny metallic red PVC panel of the ankle-length skirt, straightened her ruby encrusted tiara and made a final adjustment to the black heart-shaped choker around her neck. Yes, she thought, she looked perfect.
She turned and stepped off the black-and-white floor tiles taking a few steps to face one of the male slaves who served in her realm. His wrists were secured with leather cuffs, which had a rope attached to them and threaded through a metal ring fixed into the ceiling pulled tight so that his arms were stretched out. His ankles were similarly bound in leather cuffs and secured to rings set in the floor, his legs stretched just wide enough to cause discomfort but for the soles of his feet to lie flat on the black carpeted floor.
Hanging from him his balls was a large cast-iron ball weight forged into the letter ‘N’. ‘N’ for Nemesis, the Queen of Hearts smiled to herself, the name taken from the Greek goddess of fate and retribution and one of the personas she adopted in the fetish fantasy realm she had created and ruled over. She lifted the weight up and traced her finger along the letter and then let it drop heavily. The blindfolded man gasped as the velocity of the falling weight stretched his balls. The Red Queen merely laughed sadistically at his predicament. She gestured to the Duchess who, silently and secretly, stood behind her helpless victim and lifted the blindfold from his eyes to reveal the vision of his mistress transformed into the Queen of Hearts.
The cruel piercing blue eyes, framed in ruby streaked ebony hair, met her victim’s as the blindfold was removed permitting him to feast his eyes on her. He gasped and then moaned in homage at the formidable and ravishing presence before him. She stood there, her heaving cleavage held tight in a shiny electric red PVC bodice festooned with black hearts and framed with a ruff in gold. This is the part I love, she mused. The look in their eyes when she reveals herself; that look of mesmerised devotion mixed with fear, fear of the unknown, fear of the seductive torment they know she is capable of inflicting on them.
“So, are you ready to submit to the Queen of Hearts?” her voice whispered with more than a hint of playfulness mingled with the malice.
“Yes mistress,” was the breathless reply.
“Mistress?” the inflection of her voice was raised and indignant, “Do you think that’s the correct form of address for the Red Queen?”
“No your majesty. I mean your majesty. Of course, I mean your majesty.” 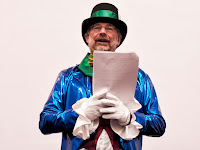 He has been known to dress up as a Fetish Hatter to promote his work. 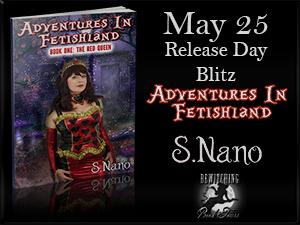