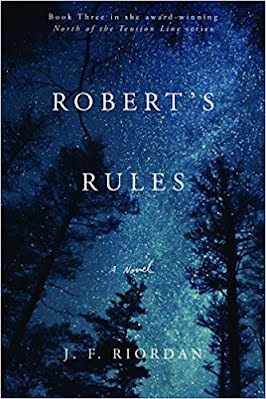 As the new Chairman of the Town Board, Fiona Campbell finds that life has become a series of petty squabbles, dull meetings, and papers everywhere, all complicated by her guardianship of the as yet unidentified screaming goat. In desperation, she hires an unknown newcomer, the compulsively orderly Oliver Robert, to run her office and keep her organized.

Roger’s fame as an idiosyncratic yoga practitioner continues to spread, and he and Elisabeth are looking for a new location to accommodate the growing crowds at their tiny coffee shop. Ferry Captain and poet Pali has an offer to leave the Island, and wonders whether it is time to introduce his son, Ben, to the larger world. Meanwhile, the Fire Chief is threatening to quit, and Fiona finds herself faced with an Island controversy and an unwanted set of new responsibilities.

As Pete Landry prepares to leave for one of his regular journeys, Fiona begins to suspect that his life may be more than it seems. His secrecy raises doubts in her mind about whether he can be trusted, and their breakup plunges her into grief. The reliable Jim, always nearby, is all too ready to offer comfort.

Robert’s Rules is Book Three in the award-winning North of the Tension Line series, set on a remote island in the Great Lakes. Called a modern-day Jane Austen, author J.F. Riordan creates wry, engaging tales and vivid characters that celebrate the well-lived life of the ordinary man and woman.

Pete looked over at Fiona. “That stop sign…I’m sure it was only a suggestion.”

“Never mind,” said Fiona blithely. “There was no one around.”

She glanced at him briefly and returned her eyes to the road.

“It’s never occurred to me that books should match,” he said.

“That’s because you read. Well, also probably because you’re male,” Fiona conceded. “But serious people. I mean, people who care about ideas, and about actually reading, don’t have matching books. If anything, their books are a haphazard reflection of the search for knowledge, reflecting the wanderings of a person’s curiosity. There’s nothing matching about that.”

“I don’t think I’ve ever been to a house with matching books.”

“How about a house with just one set of encyclopedias and not one other book? Have you been to one of those?

“You have thought a great deal about this.”

Fiona looked sheepish. “Yes. Because it’s a form of pretention, and I detest pretention.” She pulled into a parking space that had been more or less invented between the cedar trees and pulled on the brake, continuing the conversation without turning off the engine.

“It’s showing off that you have books, even while it’s clear that the books are only props. And, also,” she confessed, “it bothers me because their houses are so beautiful, and mine is full of haphazardly unmatching books.”

“And stacked everywhere, by the way. We need to get you some more bookcases. But if it’s clear that the books are props,” he said, returning to the main point, “isn’t it also clear that the person doesn’t actually read them? In which case, I would argue that it’s not pretension, it’s actually the opposite: no pretense whatsoever, just, perhaps, shallowness. Now, if an unserious person were to have lots of unmatching books that he had never read and were trying to make people believe that he’s read them, that would be pretentious. So, you should shift the focus of your wrath to owners of never-read, unmatching books. Leave the poor matching people alone. They don’t know what they’re missing.”

Laughing, Fiona looked at him and shook her head. “Stop looking so pleased with yourself.”

“I am pleased, though. I have unmatching books, and I read them. Q.E.D. I feel smug.”

“If you were the kind of person who felt smug, I wouldn’t like you.”

Pete smiled. “I feel smug about that, too.”

Laughing and shaking her head, Fiona turned off the engine. They gathered their things from the trunk of the car and headed off toward the water and its rocky beach. “How would you even find the book you wanted if they were all wrapped in matching paper?” asked Pete, slinging the straps of the beach chair bags over his shoulder. 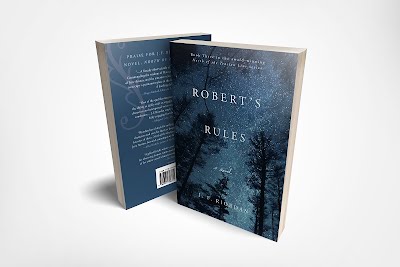 Other Books in the North of the Tension Line Series: 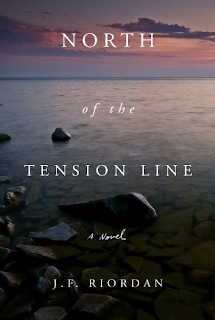 North of the Tension Line
Published: May 2016

Fiona Campbell is a newcomer to tiny Ephraim, Wisconsin. Populated with artists and summer tourists, Ephraim has just enough going on to satisfy her city tastes. But she is fascinated and repelled by the furthest tip of Door County peninsula, Washington Island, utterly removed from the hubbub of modern life. Fiona's visits there leave her refreshed in spirit, but convinced that only lunatics and hermits could survive a winter in its frigid isolation.

In a moment of weakness, Fiona is goaded into accepting a dare that she cannot survive the winter on the island in a decrepit, old house. Armed with some very fine single malt scotch and a copy of Meditations by Marcus Aurelius, Fiona sets out to win the dare, and discovers that small town life is not nearly as dull as she had foreseen. Abandoning the things she has always thought important, she encounters the vicious politics of small town life, a ruthless neighbor, persistent animals, a haunted ferry captain, and the peculiar spiritual renewal of life north of the tension line. 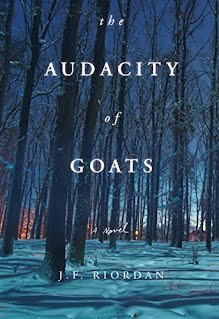 All is not well north of the tension line. A series of unsettling nighttime incidents have left the islanders uncertain whether to be nervous or annoyed. Are they victims of an elaborate teenage prank, or is there a malevolent stranger lurking on the island? Meanwhile, out-of-state owners of a new goat farm seem to consider themselves the self-proclaimed leaders of the island; Pali, the ferry captain, is troubled by his own unique version of writer’s block; and Ben, the captain’s ten year-old son, appears to be hiding something. But it is only when the imperturbable Lars Olafsen announces his retirement, and Stella declares her candidacy for office, that the islanders realize trouble is brewing. Fiona must decide whether it is time to leave the island for good, or to make another reckless gamble.

Book two in the award-winning North of the Tension Line series, The Audacity of Goats is the continuing tale of Fiona Campbell, and her reluctant adventures among the pleasures, mysteries, and exasperations of small town life 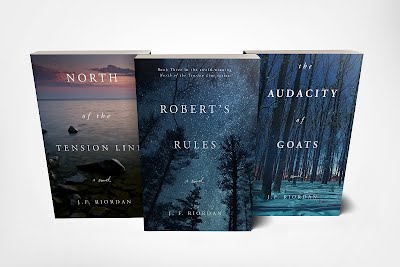 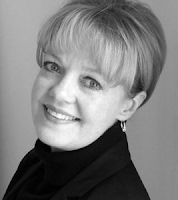 J.F. Riordan was born in New Jersey and first moved to Michigan, then Wisconsin as a child. At the age of 14 she decided to become an opera singer, and was fortunate in the aftermath to have been able to sing. At 16, after two years of high school, she went to the University of New Mexico to study voice, continued her music studies in Chicago and Milwaukee, and ultimately became a professional singer. Homesick after years of travel, she came home to the Midwest, finished her college degree, and became certified to teach high school. She taught for three years in the inner city before taking a position as a program officer for a foundation. She lives in exile from Washington Island with her husband and two dogs. North of the Tension Line is her first novel.