Read an Excerpt from The Beautiful Dead: A Tale of K-Pop, Ghosts, and Nine-Tailed Fox Women by Jun Prince & Enter the #Giveaway ~#UF #PNR 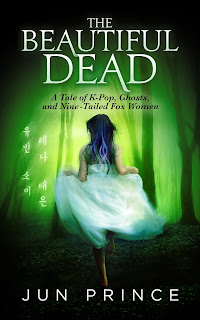 A lonely Korean pop star learns her high school classmate died five years ago. So why are they still texting?

About The Beautiful Dead:

Yubin knows she’s different than the other girls in the pop group SIITY. Yes, they all got sucked into the same machine, giving up schooling and signing ridiculously long contracts before anyone knew if they'd be successful, but that's how pop stars are made in Korea. Yubin is supposed to be thankful for that, but she isn't. She doesn't even like the girls she performs with.

She’s more connected to her former schoolmate Jieun, even though all they ever do is text. Over the last two months, Jieun has become her confidant and best friend, connecting Yubin to the real world in a way she desperately needs. Now that SIITY is going to appear on the reality show The Incredible Race: Asia, Yubin will need that connection more than ever, which is why she’s devastated to discover Jieun has been dead five years and is actually haunting her.

If that weren’t enough, Yubin’s not the only SIITY member with issues. Rena’s father is emotionally abusive. Somi has a learning disability, and after a near death experience, Tae-eun becomes a nine-tailed fox woman. The only way they’ll survive the show, each other, and the supernatural currents buffeting them is to work together and win the hearts of their fans. Because if they don’t, they have nothing to go back to even if they survive what's trying to kill them.

Read an Excerpt from The Beautiful Dead:

She was still unaccustomed to spirit combat, but a small tempest swirled in the underworld around her. Humans too felt the wind she created, their muscles tightened, and more than a few quickened their pace to evade the chill. Scraps of litter spiraled over real world concrete, and whips of black hair whirled in an angry nimbus around Jieun’s face.

The shadowman looked up. She'd expected empty pits of darkness where eyes should have been, but when the creature ceased feeding, a set of all too human brown eyes that now lacked eyelids appeared in the monster’s head. They contrasted with the rest of its body in that while the majority of the creature lurked in shadow that was darker than everything else in the Dead World, these two spheres burned as if absorbing all the spirit light that should have detailed the shadowman’s body. The flow of spirit energy that connected its ugly mouth to the girl stopped, and the ghost realized that she held the creature’s attention.

The shade of an eerily human face like black paint on even blacker canvas contorted in what could have just as easily been taken for triumph or rage. It unleashed an otherworldly snarl that was anything but human and charged Jieun. Though it had a man's body, it rushed in an inhuman lope on all fours that seemed more like an animal. Jieun darted out of the way—it wasn’t a conscious thing, and the instinct may well have saved her dead life. If she hadn’t known before, alarm she felt made her certain; ghosts could die a second death.

She whirled after the attack expecting the shadowman behind her but it had vanished. She sighed in relief. Then, without warning she saw the black shape leap from the roof of a magazine stand just outside the subway station. She cried out in alarm, and before its feet had touched the ground its giant mouth fastened on her shoulder. The weight of the attack forced her to the ground, and in a moment of dawning horror she realized it was impossible to escape.

She shrieked. The pain was beyond anything she imagined possible for a spirit to experience. It wasn’t like trailing her fingers through the wall, or even passing completely through a physical object. Those pains were an affirmation of life, cold shocks that, while not comfortable, served as a reminder that she was still in some sense alive. The feeling of her spirit body being torn apart by the shadowman’s teeth seemed as if the devil had run away with God’s scalpel and used it to peel thick ribbons of her soul away from creation.

Though the shadowman looked like and had similar features to a man, it made low growls that were far distant from human speech. It wasn’t a language at all – if it had been she’d have instinctually understood it. It shook its head like a starved wolf and further tore into the fabric of firelines that composed her spirit body. Its breath smelled of rotten flesh, and she could hear the pulse of bestial rhythmic snorting in her ears. She needed a weapon. She didn’t have one. This was it. Jieun would die… this time for real.

Jun has lived in Asia for the better part of the last decade. During his years in Korea, he made a point of learning about and getting as close to the Korean entertainment industry as possible while writing his first novel "The Beautiful Dead." He enjoys telling stories about monstrous humans and humanized monsters. 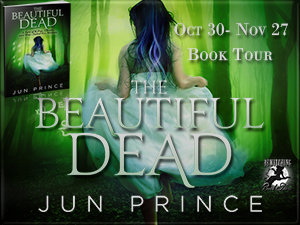