This post is part of a virtual book tour organized by Goddess Fish Promotions. Leena Clover will be awarding a $10 Amazon or Barnes and Noble GC to a randomly drawn winner via rafflecopter during the tour. Click on the tour banner to see the other stops on the tour. 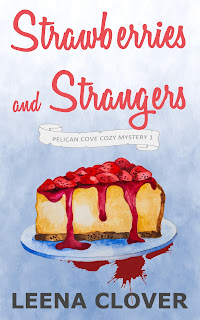 Dumped by her cheating husband, Jenny King is trying to build a new life in the small seaside town of Pelican Cove. Locals are lining up at the Boardwalk Café for her tasty cakes and muffins. But when her aunt is accused of killing a stranger, Jenny is forced to set her apron aside and put on her sleuthing cap.

Jenny battles with the cranky local sheriff and quirky local characters to get to the truth. Aided by her new friends, she will move heaven and earth to find out who the dead stranger was and what he was doing in Pelican Cove.

If you like cozy murder mysteries with friendly small towns, scenic settings, yummy food and a touch of romance, you will like Strawberries And Strangers.

Buy now and get hooked on the brand new Pelican Cove Cozy Mystery Series. Book 2 and Book 3 are coming soon in May 2018.

The Newburys were the richest family in the town of Pelican Cove. Although they didn’t share the honor of being the ‘first family’, they tried to make up for it with plenty of wealth. Rumor had it their coffers were full of gold, gold they had dug up from the sea. They had a sprawling ocean facing estate spread over ten acres. Unlike most houses in town, it was newly built. Anything built in the last fifty years was considered new in Pelican Cove.

“But you’ve been open twenty five years, haven’t you, Petunia?”

“That’s just how long I owned this café, dear. It was around a long time before that.”

“So the Newburys never came to the Boardwalk Café?”

“They got rich in the great storm,” Petunia whispered, leaning forward. “And they built that big castle of theirs.”

Petunia rolled her eyes and turned toward Jenny.

“They got rich and uppity, I tell you. I guess they thought coming to this café was beneath them.”

“Then why have they hired us now?” Jenny asked.

Leena Clover grew up reading mystery books. Some of her favorite authors are Agatha Christie, M C Beaton and Donna Andrews. Now she is trying her hand at writing whodunnits, making them as nail biting as possible while keeping them cozy. Her love for food is evident in all her books. Readers can find yummy treats in the pages of her books, along with friends that last a lifetime.
Connect with Leena at her website or write to her. She looks forward to hearing from you.