On the knife edge of danger in the streets of New Orleans, these rugged men call the Big Easy home, and they’ll do whatever it takes to protect their own. 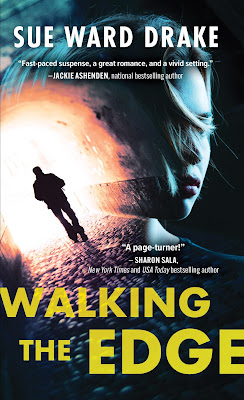 Ex-army ranger Mitch Guidry never should have let his brothers talk him into joining them in the Big Easy. Particularly when they have him going head-to-head with the very last thing he needs: a feisty redhead who has more opinions than even his hard-headed brothers. Loyal and overprotective to a fault, Catherine Hurley will do everything she can to stop Mitch from finding her fugitive brother... and yet, he can't get enough of her.

Cath should be furious with the overbearing ex-ranger who shows up on her doorstep looking for her brother. Sure, Mitch Guidry is hotter than a Louisiana summer and pushes every one of her buttons, but he's also an immediate threat to her family, and family is everything to Cath. Unfortunately, the only way to save her brother is to stick to Mitch like glue. But sharing close quarters with him while they search for her missing brother together proves to be more than a little challenging…particularly when it comes to protecting her heart.

Sue Ward Drake takes you on a wild ride through the steamy streets of New Orleans in this action-packed, sexy romantic suspense!

Sue Ward Drake has lived in most of the different neighborhoods of New Orleans, including the French Quarter. She was forced to leave during hurricane Katrina, but still counts as friends a wide spectrum of the city’s inhabitants. Though she now resides minutes from the mountains, her heart will always belong to the Big Easy.

Cath extended her hands to indicate the old city around her. “The French Quarter has been lived in for three hundred years. Some early inhabitants still linger. For you ghost doubters, I bet you’ll come away from our walk believing. At least a little.”

The sound of pounding feet drew everyone’s attention to the man running toward them. She urged her customers closer to the entrance of Pere Antoine Alley, but the jogger stopped under a street lantern right in front of her.

Her blood sizzled. She’d seen this tan windbreaker, this dark cap of hair, and the body probably capable of two hundred push-ups before breakfast. Exactly forty-five flipping minutes ago. Like metal to a magnet, her body veered into his force field until…his fierce gaze pinned her with a laser-tag blast.

Cath staggered under the impact, the earlier butterflies fluttering back to life. He stood as still as the wrought iron fence behind him, his big hands hanging beside powerful thighs. For now. Any minute he could spring into action.

Within seconds of busting into her apartment, he’d barged past her and pushed her brother against the stove. Then when Les bolted out the door, this guy had followed in a heartbeat.

No. Back up the reel.

They’d stared at each other for a Guinness-record-setting second then, and now his whole body seemed to hum like a live wire. He’d found her brother inside her house. Did that mean he could arrest her, too?

Her throat closed up, and a clamp squeezed all the air from her lungs. She braced, waiting for him to grab her hands and lock on cuffs.

A cough from one of her group jolted her.

The clock on her two-hour ghost tour ticked away, and she had to make sure the travel website guy would have nothing but raves.

“Listen…” Cath raised a finger to her lips. “If you’re quiet you can sometimes hear a man singing.”

The tourists followed her down the flagstone walkway. She turned around to speak again but slammed her mouth shut. Of all the gall.

The hunky bounty hunter stood front and center. The hard angles of his features cast a pattern of light and dark across his face, and danger flashed from him in neon lights. For one insane moment when his body had brushed hers in the apartment alley, she’d sensed he might kiss her like the prince waking up Sleeping Beauty. He’d awakened something, alright. Cath squared her shoulders and cleared her throat. “Excuse me, this is a paid tour.”

“Is it too late to join?” His rich baritone melted into her hungry pores like chocolate sauce on a sundae.

Not for a minute did she believe him to be a rabid fan of haunted houses or an avid collector of ghost stories, but she needed all the dinero she could earn to pay for Les’s lawyer. She eyed the bounty hunter. “Would you like to buy a ticket?”

“You take plastic?” His long—sensual—mouth lifted. The masculine assurance in his smile ought to send her back straight up. Instead, the heat coming off him poured into her private places.

“Of course.” They conversed like polite strangers, not people who’d been forced to interact under extreme conditions. She wanted to know what had happened with her brother, but she couldn’t ask in the middle of her tour. “I didn’t say anything at the time, but you can pay now for your previous tour, if you like.”

“My previous tour?” The confusion in his eyes disappeared when he realized she meant his bounty hunter visit to her apartment. He shrugged all friendly-like. “I can always contest the charge if it’s not correct.”

Of course, he would.

“Nah. Consider it lagniappe.” Cath turned to her tourists and explained the old New Orleans custom of grocers giving customers a little something extra. Handsome would likely never know if she charged more than normal, but she prided herself on running an ethical business. “What’s over is over.” Please.

One eyebrow rose. “Are you sure about that?”

Positive. She lowered her head to avoid the sight of his disturbing physique. “If you give me an email address, I’ll send you a receipt.”

Good at his job? Good at flirting? Good in bed?

Or all three. She handed back his credit card. “Nice to meet you, Mr. Mitchell Guidry.”

“I doubt we’ll ever be on a first name basis, Mr. Guidry.”

She was coming to see the truth in that.