USA Today bestselling author Eliza Knight takes you into the heart of the Highlands, where these warriors are prepared to give up everything in the fight for their country. 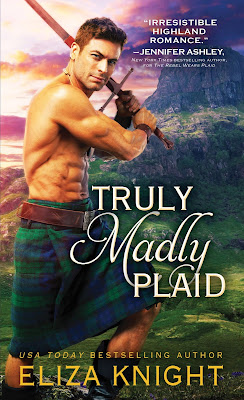 Annie MacPherson’s world was torn apart when her family’s castle was ravaged during the war. Determined to aid her countrymen, she braves the battlefield and finds gravely wounded Lieutenant Craig MacLean. Soon her heart belongs to the fierce warrior.

As the English dragoons draw closer to Annie’s makeshift hospital, Craig knows they have to escape together if they’ll have any chance to survive. But when they come face-to-face with the enemy and Craig is imprisoned, Annie will have to risk everything she has to save the man she can’t live without.

History and adventure come to life in Eliza Knight’s thrilling Scottish Highland romance. Annie is based loosely on Anne MacKay, Anne Leith, and Lady Maxwell, who risked their lives to protect Jacobite soldiers by hiding them, healing their wounds, and helping them escape from enemy forces.

ELIZA KNIGHT is an award-winning and USA Today bestselling author of over fifty sizzling historical romances. When not reading, writing, or researching, she chases after her three children. In her spare time she likes daydreaming, wine-tasting, traveling, hiking, and visiting with family and friends. She lives in Maryland.

This was a mistake.

Every hair on the back of Lieutenant Craig MacLean’s neck stood on end, as though each one wielded its own sword against the enemy.

Without the protection of the fortress walls, they were sitting ducks tromping through the forest. An army with most of its men on foot would not be able to escape should a legion of redcoats cut off their path.

A vulture flew overhead, accompanied by two cronies as they cut a wide circular path in the graying sky. Were he and the men the dead meat they sought?

“We should go back,” he said to Graham MacPherson. “Your invitation was appreciated, but I’ve no’ got a good feeling about this.”

There was no telling when Cumberland’s men would make their move, and if the men were inebriated from drink and tired from too much celebrating, they’d not be ready for an attack.

Graham chuckled and tossed the end of a stick he’d been chewing at Craig. “Ye’re afraid of a few birds, are ye?”

“Let loose, MacLean. The men need to have some fun, and so do ye.”

The very last place that Craig wanted to be was riding toward Cullidunloch Castle. It wasn’t that he didn’t like castles or his host or the warm feast that Graham had promised or the ale that was certain to be flowing.

Craig liked all of those things quite a lot. More than a lot, if he were being honest. Toss in a bonnie wench or two to flirt with, and he’d be in his own version of heaven. But Cullidunloch Castle wasn’t only home to his best mate. It also happened to house a woman he’d been working hard to avoid for months. Graham’s sister Annie was very beautiful and very irksome. She was as brilliant as she was irritating, and despite that brilliance, the lass had conveniently forgotten the single encounter the two of them had shared.

He hadn’t forgotten. How could he? And now he was descending upon her home—her and Graham’s home—to partake of their hospitality. Her hospitality. If she was willing to give it.

Hospitality he would really like to have, considering he hadn’t had a warm bath in weeks. He’d only managed to keep himself from smelling like a chamber pot by swimming—when the lochs weren’t covered in a sheet of ice. His clothes were getting stiff from use, and he was fairly certain that his last good pair of hose now had a hole where his big toe was greedily trying to squeeze through.

At least right now they weren’t dealing with snow, though it was only early spring and another storm was inevitable in the Highlands. The temperatures had been rising steadily, enough so that the men in his regiment weren’t so fearful of freezing to death anymore. Unless of course it snowed tonight and Annie MacPherson tossed him out with the last of the evening’s rubbish. He wouldn’t put it past her.

Craig would have to make nice with her, though he found the very idea absurd. Graham didn’t need to know what a termagant his sister truly was. He’d never told his friend what had happened when he’d found Annie retching after battle.

To everyone else she encountered, Annie was sweet as sunshine. Even the men she had to stitch up while they writhed in pain called her their angel—men in his own regiment, men he’d trained and led into battle. She was lauded for her nursing skills and her bedside manner, which stung even more. Of course he sent his men to her to be mended; she was the best damn healer he’d ever seen.

And that was about all the amount of niceties he’d extend. Why had he been the only unlucky fellow to have encountered her waspish side?

He would never be caught openly acknowledging the bonniness of her face. The way her chin curved into a petite point or the way her eyebrows arched delicately over her mesmerizing eyes. Eyes that were the most incredible amber color.

Every time he looked at Annie, every time she smiled, he saw that derisive sneer she’d flashed at him the night he’d tried to help her. He’d seen a side of her he was certain no one else had, and he’d run as far as he bloody could—after making sure she was safely taken care of, that was.

He wasn’t a complete monster.

But he was quite all right with her believing he was, if that meant she’d stay the hell away from him.

“Is the pottage breakfast no’ agreeing with ye?” Graham’s teasing voice cut through Craig’s thoughts.

“Lad? I think I’ve got a year or two on ye. And ye forget we’ve been living together on campaign for months. Bean pottage is no’ your friend, mate.”

Craig snickered. “Are ye saying that ye’re in need of a latrine?”

Craig was glad for his friend’s distraction. Though he didn’t want to talk about beans or what happened after he ate them.

“Annie’s sure to have a hearty meal for the lot of us this evening.” Graham sounded so wistful, as though he were talking about something more fantastical than food. Like the war ending with Prince Charles Stuart sitting on the throne. Now that was something to long for.

Craig’s smile faded, and he nodded, having hoped to avoid any further conversation about Graham’s chit of a sister.

“I’m honored to be your guest.” This much was true.

“Honored?” Graham let out a guffaw. “Ye’re my brother in arms, mate.”

While they’d known each other for years, they’d become closer friends after having saved each other’s arses at the battle at Falkirk the January past.

“I’m certain Logan will want to spar with ye,” Graham was saying of his younger brother, who’d been sent home from the front with a grave injury. “And Annie, she’ll be there to sew ye up.”

Craig laughed, but only half-heartedly. If he had his way, he’d keep Annie the length of a jousting stick away from him—preferably farther—at all times.