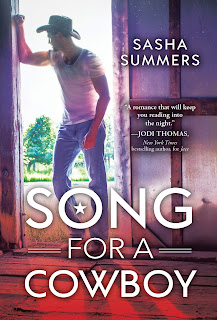 Song for a Cowboy

Emmy Lou King’s whole family is legendary in country music. When she lands the opportunity to sing the American Football League anthem and serve on one of the AFL’s anti-drug charities, she’s sure she can handle working with Brock Watson even though she’s barely recovered from their breakup—and she’s never loved anyone else.

Brock Watson is feeling the pressure. From dealing with his father’s declining health, keeping their ranch running, staying in game-ready shape, and his dedication to the charity that changed his life, there’s no time for anything else. Emmy Lou included. After six years, he’d like to think she couldn’t mess with his head anymore. But one look, one smile—and he knows she’s as dangerous as ever. He can’t resist her—he never could.

The more time Emmy Lou spends with Brock, the harder it is for them to keep their distance.

SASHA SUMMERS has written more than 20 romance novels and novellas. Now a best-selling and award winning-author, Sasha continues to fall a little in love with each hero she writes. Sasha lives with her amazing and supportive family and her beloved grumpy cat in the suburbs of the Texas Hill country.

“No, I won’t.” Emmy spoke into the mic on the earbuds she had plugged into her left ear, her sister still laughing. “But this might be a little easier if I wasn’t FaceTiming you right now.” Umbrella in one hand, phone in the other, she started walking.

Krystal held her phone closer, flipping her lower lip for a full-on pout. “But I miss you.”

“I miss you, too,” Emmy said, blinking raindrops from her lashes. “Enough to walk through a parking lot, in the rain, with an umbrella that won’t open, and keep talking to you.” She kept pressing the button on the handle, but it didn’t help. Of course, the rain was falling faster now, big, pelting drops.

“Where is Sawyer? Why isn’t our bulky, scowling bodyguard carrying a massive bulletproof umbrella over your head?” There was a hint of accusation in her sister’s voice.

“Be nice to Sawyer.” Emmy wiped the rain from her eyes. “He is picking up Travis down the road—because our brother ran out of gas.” She sighed, clicking the button on her umbrella again. “And I’m getting soaked because this thing is broken. I should hang up.” Emmy laughed, peering at the stadium through the rain. Rain that was getting heavier and faster.

“But you won’t.” Krystal leaned forward. “Then again…you are starting to look like a wet rat. Walk faster.”

Emmy stuck her tongue out at her sister, her steps quickening. She was sort of jogging now, weaving around the parked cars.

The squeal of brakes had her jumping a good ten feet in the air. A truck, going way too fast in a parking lot—in a torrential downpour—skidded to a stop mere inches from where she stood. It happened too fast for her to move. Too fast to do anything but curl in on herself, dropping her umbrella and holding her other hand, and phone, out to protect herself. Which, considering the vehicle was massive and she was not, didn’t make any sense but… it was instinctual. She braced herself on the truck hood, her knees knocking so hard there was a high likelihood she’d collapse onto the slick concrete at any moment.

“Holy shit,” Krystal was saying, the phone now facedown on the hood. “Emmy! Emmy? Can you hear me? Are you okay? Answer me.”

She could have been hit… Almost was. But wasn’t. Emmy flipped the phone over. “Here.” But she was gasping for breath. Her heart pumped madly, reaching what had to be the maximum beats per minute. “Fine.”

She was vaguely aware of the truck’s driver’s-side door opening wide, followed by rapid footsteps splashing in newly formed puddles. But she was still grappling with the whole near-death experience and couldn’t process the arrival of her almost assailant.

“Where is the driver? Are they getting out? Hold your phone up,” Krystal growled. “I want to see what this asshole has to say about nearly running you over.”

“Are you okay?” said the mountain of a man heading her way.

“I’m fine,” she answered, rubbing water from her eyes. Her hand shook. Her voice shook. But she was okay.

“You didn’t see me coming?” he asked, stepping closer. “My truck?”

“Seriously, Emmy Lou, hold up the phone,” Krystal snapped. “You couldn’t see her? In her bright-yellow-and-pink, daisy-covered raincoat. Because, honestly, she might as well be wrapped, head-to-toe, in reflective tape. Asshole.”

“Krystal,” Emmy whispered into the mic hanging from her earpiece.

“Hold up the phone. You might need a witness.” Krystal sighed. “Emmy Lou, I’m serious.”

Emmy held up the phone, unable to stop trembling.

The man came around the hood of the truck and stopped. His eyes widened and his mouth opened, but he didn’t say anything. Shock probably. Complete and total shock. Not just because he’d almost turned her into a smudge in the stadium parking lot, but because he was who he was and she was who she was and they were standing face-to-face…staring, at each other, in the rain…

“Brock?” Krystal sounded just as stunned. “Is that Brock? Is that you?”

No, there was no way that was possible. Emmy was not equipped for this. Not right now. Not in the least. She should be; it had been years. Years. This shouldn’t be a big deal. Seeing him, that is. Being almost run over by him—by anyone—was sort of a big deal.

“Hey.” Brock nodded, barely glancing at Emmy’s phone and Krystal. His gaze was pinned on her.

His mouth opened, then closed and the muscle in his jaw clenched tight. The staring continued. He just stood there, rigid, wearing an odd expression on his face. A face that, all weirdness and near-death experiences aside, she knew well. All too well.

Adrenaline was kicking in now. Enough to get her moving, anyway. And that’s exactly what she was going to do. Move. Away. The sooner the better. “Okay.” She hung up her phone, shoved it into her pocket, and started walking—do not run—toward the stadium door. No looking back. Just moving forward.

Did she almost slip? Yes. Did she go down? No. Had she managed to save a shred of dignity? Probably not. She pulled the door wide, stopping just inside to scan the signs and arrows for the bathroom. Her phone started ringing. She didn’t have to look at it to know it was Krystal. She waited until she’d closed and locked the door on the family restroom before she answered.

Yes. Brock. She shrugged out of her raincoat and sat in the chair placed next to the diaper-changing station. Her pulse was still way too fast, and her stomach was all twisted up. “I know.” Sitting wasn’t good. She stood, smoothing her pale blue blouse and staring down at her jeans. Her raincoat had left a perfect line midthigh. Above the line, slightly damp. Below the line, saturated. She wiggled her toes in her rainboots, water squishing.

“This sucks.” Krystal cleared her throat. “I wish I were there.”

“I do, too.” She stared at her reflection. “But I know what you’d do if you were here.”

“You’d remind me that I already spent too many years and too many tears on him.” Which was true. Their breakup—rather, his sudden and complete disappearance from her life—had almost broken her. She’d cried until she was sick, and Krystal knew it, too. Krystal was the one who pushed her to get up, to keep going, every day. Krystal was the one who told her it was okay to be angry with him for deserting her without a word. And when Emmy Lou was more herself, Krystal had turned all the tears and sadness and anger into their double-platinum single “Your Loss.” “And you’d be right.”

“True.” Krystal paused. “But after I was done telling you all that, I’d get up in his face and chew him out for almost running you over. And that’s just to start.”