Colombian Betrayal exposes the death and violence behind the entangled interactions between governments, revolutionaries, terrorists, and drug lords. 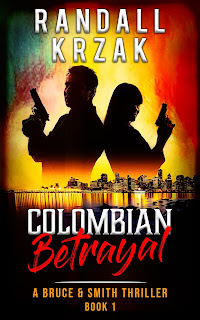 Colombian Betrayal tears the cover off the drug trade and exposes the death, and violence behind the twisted connections between governments, revolutionaries, terrorists, and drug lords.

Watch as an unholy alliance is formed when the profits of a Columbian drug lord Olivia Moreno, begin disappearing and deadly new international competitors appear on the horizon.

Moreno, head of the Barranquilla Cartel, strikes a deal with the Revolutionary Armed Forces of Colombia (FARC). Little does she know she is signing her own death warrant! FARC has a group wanting a foothold in South America—the Islamic State, and she is in the way.

On the run, Moreno is captured by a CIA team. She spins a tale to use her money and manpower to destroy ISIS in an effort to save herself. Laws and rules of engagement are meaningless to Moreno, her life and her family are her only concern. Will the CIA leader fall for her offer?

Will team leader AJ Bruce strike a deal to turn the tables on Islamic State? Can she stop them from launching an attack on the United States? Or will she be too late?

Is it worth trading control of Afghanistan’s poppy fields with Moreno as a reward for her cooperation? Or is Bruce playing her in an attempt to double-cross her and kill two birds with one stone?

Get your copy today, and watch this high stakes game of kill or be killed.

Dawn broke with birds twittering outside Olivia’s country estate. She opened blue-green eyes and focused on the view through the open window. Tinges of red and orange stretched across the horizon, seeking the deep blue heavens. More songbirds joined in, their melodious voices adding to the morning’s chorus. Nearby, a rare Colombian screech owl hooted. Other birds shrieked, their wings beating the air as they scattered.
Olivia yawned and crawled out of bed. Twinges cascaded through her aching muscles caused by overexertion in yesterday’s intense personal security training. Time for some fresh air while it’s quiet. She slipped a purple velvet robe over her slender athletic body and pulled on matching slippers. Padding toward the balcony, she opened the doors and stepped outside. She gazed at the tranquil countryside and smiled.
Craack! Craack!
Bullets ricocheted off the stonework, missing her head by inches. She dropped to the floor amid a hail of flying rubble and dust. Hunched like a hermit crab, Olivia crawled inside and slammed the doors.
“Madre de Dios!”
Stomach lurching, chest heaving, she rolled across the floor to the bedside table. Her hands shaking, she grabbed the handle, opened the drawer, and removed her FN Five-SeveN handgun. She fumbled for a second magazine and stuffed it into a pocket on her robe. Keeping out of view, she crept back to the side of the balcony and slid down the wall.
She peered through a small opening, looking for signs of intruders.
Nothing. All seems normal.
Pushing through the doors, she dashed around the corner, squatted, and fired three times without aiming. An incoming round smashed into the wall in front of her. She leaned into the stone for cover as rough-edged shards whirled toward her face. Startled by the fast-approaching slivers, Olivia ducked and dropped the pistol. Blood trickled from a cut above her right eye. She sucked in her breath and wiped it away as anger replaced fear.
“Alto.” A man of medium height climbed over the railing from the patio. Piercing dark eyes shone beneath a mop of black hair as he plopped into a chair at the small bistro table, and helped himself to a glass of fresh-squeezed orange juice.
“Diablo.” Olivia spat the word as the man with the physique of a bodybuilder stood and helped her into the other chair. “Ramon, one day you’ll cause my death. The training becomes more intense every day.” She grabbed his goblet. “Salud.” She drained the glass.
“Doña Olivia, you hired me to provide protection. When I’m not here, you must do this for yourself and your family. Your enemies will give you no warning, which is why the lessons must become more realistic.”
Olivia nodded. “Si, you are correct. I want to live a long time and enjoy my fortune—unlike my father, brother, and first husband, who died before their time.”
Ramon Cristobal Alvarez and Olivia Perfecta Moreno gazed at each other.
* * *
The following morning, Olivia woke again to the hoot of the owl. She rushed to the balcony to find the bird’s hiding place. Two shots rang out. Following her training, she crashed to the floor and squirmed back into the bedroom.
She grunted and laughed, thinking Ramon had upped the training. A moment later, a loud thump resounded against the door as Ramon forced his way inside, gun drawn.
“Olivia, this isn’t training—it’s real.”
Ramon pushed aside a balcony door. He crawled outside, peeked between ornate pillars, and scanned the area for would-be assassins. After completing his sweep from the balcony, he returned inside.
“They’re gone.” He twirled his right index finger in the air several times. “Stay here. The guards will scour the full perimeter for those seeking to harm you, while I check on Pedro, Alonzo, and the girls.”
Olivia nodded. Shaking, she wrapped her arms around herself.
Ramon walked to the door. Before he opened it—
A gunshot echoed in the corridor.
“Madre de Dios!” Ramon leaped toward Olivia, shoving her to the floor with one hand, a weapon in the other.
A high-pitched scream pierced the air, followed by a second.
Silence.

Randall Krzak is a U.S. Army veteran and retired senior civil servant, spending thirty years in Europe, Africa, Central America, and the Middle East. His residency abroad qualifies him to build rich worlds in his action-adventure novels and short stories. Familiar with customs, laws, and social norms, he promotes these to create authentic characters and scenery.

His first novel, The Kurdish Connection, was published in 2017, and the sequel, Dangerous Alliance, was released in November 2018. Both placed in the 2018 Global Thriller Book Awards sponsored by Chanticleer International Book Awards, with The Kurdish Connection finishing as a semi-finalist and Dangerous Alliance being selected as one of seven first in category winners. The third novel in the series, Carnage in Singapore, was released in August 2019, and is currently a semi-finalist in the 2019 Chanticleer International Book Awards. He also penned "A Dangerous Occupation," a winning entry in the August 2016Wild Sound Writing and Film Festival Review short story category.

He holds a Bachelor of Science degree from the University of Maryland and a general Master in Business Administration (MBA) and a MBA with an emphasis in Strategic Focus, both from Heriot-Watt University, Edinburgh, Scotland. He currently resides with his wife, Sylvia, and six cats in Dunfermline, Scotland. He's originally from Michigan, while Sylvia is a proud Scot. In addition to writing, he enjoys hiking, reading, candle making, pyrography, and sightseeing. 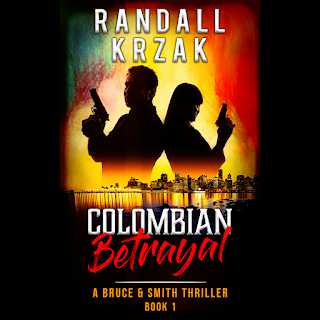