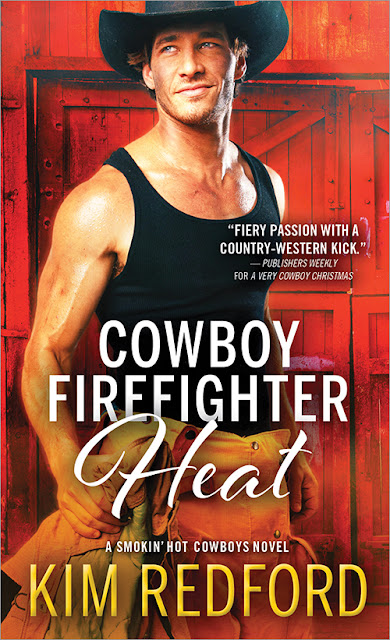 She’s back and hotter than ever. Good thing this firefighting cowboy can handle the sparks.

When country singer Fern Bryant returns to her cabin in Wildcat Hall Park, the last thing she expects to find is Craig Thorne in her home…asleep in her bed. Fern had big dreams, and chasing those dreams required sacrifices. Unfortunately, Craig was the cowboy singer and firefighter she left behind. Much to her surprise, now they’re the co-owners of her beloved Wildcat Hall Park.

Craig hasn’t seen Fern since she left Wildcat Bluff County—and him—to sing on a cruise ship. When she storms back into town, the sparks between the two aren’t only rekindled but burn hotter than ever. As long days turn into long nights, Craig is determined to show Fern that she belongs in Wildcat Bluff…and his arms.

Fern Bryant yawned as she lay down, slipped under the covers, and breathed a sigh of relief. Home…finally. And then she realized the mattress didn’t feel the same. No lumps. Had Ivy—her sister— replaced it? That’d be wonderful. She snuggled a little deeper. And she realized something else. Heat. The bed was way too warm. In fact, if she wasn’t mistaken, and surely she was, there was a…

“About time you came home,” a man said in a deep, melodic tone from the far side of the bed.

She screamed in shock, even as she recognized the unforgettable voice she’d tried so hard to forget. She leaped out of bed and switched on the nightstand lamp. “Craig Thorne! What are you doing in my bed?”

“I could ask the same of you.” He sat up, the covers slowly, suggestively sliding down to his lap to reveal the chiseled planes of his bronzed, muscular chest. A slight smile tugged at the corners of his full lips, and his hazel eyes gleamed more jade than amber.

Now she understood why she’d found firefighter gear and a dirty mug. He was a cowboy firefighter…and he drank coffee. But what was he doing here? She sucked in her breath, ready to put him in his place, but instead she inhaled the scent of citrus and sage as it swirled outward from the heat of his body. That sight and scent sent her spiraling back in time to a hot and hungry place.

She traced him with her gaze but wished she could use her hands. She’d run her fingers through his thick chestnut hair, with just a touch of wave, that brushed his ridiculously broad shoulders. When she started to follow the dark line of hair down his bronze chest, she snapped her gaze back to his face. And those knowing eyes had turned dark as they roamed her in return.

“How are you?” Craig said in a raspy voice.

She couldn’t help but smile. He always knew exactly what to say, whether it was on stage or off.

“I finished the gigs.”

“Good ones?” He cocked his head to one side as if contemplating how it’d been for her.

“Bet we’ve got better gigs at Wildcat Hall,” he said.

“Yeah.” She needed to get control of the situation, but she was so distracted by the hot cowboy in her bed that she wasn’t thinking straight. Still, it was Craig, and she couldn’t go there again. He would try to corral her, like he’d attempted to do before she’d left for her dream job when he’d wanted her to stay. He’d offered marriage and babies, but there was plenty of time for a family later. She’d always wanted a gig on the high seas, and it’d been a once in a lifetime job. He hadn’t understood. He’d made it an ultimatum—him or work. She wouldn’t be fenced in, not when her sister could step in and run the Park for her. Besides, she’d always been a rolling stone.

“When are you leaving again?”

He shook his head, scolding her with his gaze.

“I’m back. And I’m taking control of Wildcat Hall.”

“Control, huh?” He gave her a little smile and cocked his head to one side as he contemplated her.

“Ivy is ready to get on with her life. Me, too.” She didn’t much like his smile. It looked cagey.

“Slade’s a lucky guy to be with her.”

“I’m happy for them.” Fern needed to get their conversation back on track, so she could get him out of her bedroom. “Look, you’re popular at the Hall. Well, more than popular. You’re a huge hit. Naturally, I still want you to play there. It’s just…there is no us anymore.”

“You made that pretty clear when you left.”

She nodded, feeling relieved he was agreeing with her. “I don’t want to be rude, but I’d be more comfortable if you went home. I’m not even sure why you’re here in the first place.”

He leaned toward her, still with that smile on his face.

She froze in place. She had an uneasy feeling life wasn’t going to be quite as simple as she’d imagined when she was on the high seas where everything was controllable—something Craig had never been in his life.

“Ivy rented the cabin to you?”

“What do you mean?” She shivered, suddenly chilled to the bone. She clasped her arms around her middle for warmth and comfort.

“I’m willing to share the bed with you. After all, it’s only right.”

She was more confused by the moment. “I appreciate the offer, but—­”

She felt color drain from her face. “Surely, you can’t mean…my sister wouldn’t do that to me.”

“Ivy never had the same interest in the honky­tonk as you. Or me. It’s lifeblood to us. And she has a new life with Slade on his ranch.”

“Are you telling me straight out that Ivy sold you her percentage of the Park?”

“But she didn’t discuss it with me or anything first.” Fern felt incredibly betrayed by her sister.

“Guess it wasn’t in the contract.”

She shook her head, feeling a ringing in her ears that tried to blot out what she was hearing from him. “I suppose it’s a done deal.”

“Official and everything.” He stopped, looking concerned about her. “It’s okay. We worked fine together in the past. We can do it again.”

“Forty­nine percent.” She tried to wrap her mind around that agonizing fact. “You’re in charge.”

Kim Redford is a bestselling author of contemporary Western romance novels. She grew up in Texas with cowboys, cowgirls, horses, cattle, and rodeos. She’s a rescue cat wrangler and horseback rider—when she takes a break from her keyboard. Kim Redford currently divides her time between homes in Oklahoma and Richardson, Texas.