Top 10 Superpowers and Why by Dan Jolley, Author of Gray Widow's Web @_DanJolley 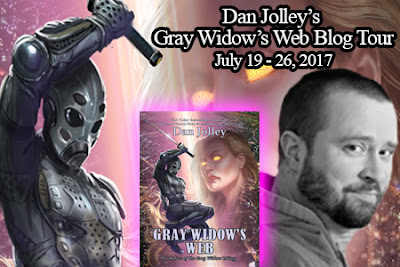 Top 10 Superpowers and Why

The Gray Widow Trilogy, of which Book 2 (Gray Widow’s Web) just came out, revolves around a group of people who have been “Augmented”—their DNA modified by a mysterious extraterrestrial force. It’s not a superhero story, or at least, it’s not just a superhero story, since it features some pretty strong elements of science-fiction and horror. But superhuman abilities do feature prominently. Therefore, below is my Top Ten list of Augmentations (a.k.a. “stuff I really really wish I could do”).

1. Flight — Who hasn’t wished they could fly? Not to get philosophical here, but since humans first became self-aware, we’ve wished we could leave the ground the way the birds do. Plus, what a great way to overcome one’s fear of heights, right?

2. Invulnerability — The biggest advantage of this in my mind is that it would utterly remove one’s fear of getting hurt. Skydiving? Running with the bulls? Driving in a demolition derby? Why not? Not to mention it would give you a heck of a career as a stuntperson.

3. Fast Healing / “Healing Factor” — Closely related to #2, but this would extend to internal issues. If your body constantly heals itself, well, no diseases, right? No diabetes…no heart attacks…no cancer. That’s the answer to America’s healthcare crisis. Healing Factors for everyone! (Get on that, scientists.)

4. Telekinesis — Sure, you could totally show up at the scene of a disaster and lift rubble off people, and put buildings back together and whatnot. But just thinking practically, who wouldn’t want to levitate the remote over to themselves without having to get off the couch?

6. Weather Control — I, for one, would really appreciate it if someone like Storm from the X-Men could show up and divert those *%&$#@ hurricanes back out into the ocean.

7. Super Speed — Honestly, there’s no reason The Flash should ever lose a fight. I mean, seriously. Maybe if he’s up against somebody who’s even faster than he is, okay. But a guy with a gun? Two guys with guns? A hundred and fifty guys with guns? Take the guns, punch the guys in the face. The end.

8. Intangibility — This is one that I’m afraid people would abuse the heck out of. Walk through a wall into a bank vault, fill your pockets, walk out. Talk about the end of privacy, too! (Doesn’t mean I don’t still want the power, though.)

9. Telepathy — On a more serious note, if we had a few good, solid telepaths out there—people who could link someone’s mind directly with someone else’s, no filters, no language barriers—just people connecting and understanding each other? I think the amount of conflict in the world would drop by at least half overnight.

10. Teleportation — Okay, yes, the protagonist of the Gray Widow books, Janey Sinclair, can teleport. Of course, her superhuman ability is somewhat limited; she can only teleport from one patch of darkness to another, and when she does “flicker,” as she calls it, it leaves a burst of heat behind. The farther she goes, the more intense the heat, an effect which she eventually weaponizes. But! If we’re talking uncomplicated teleportation—if I could be sitting here in my office one second, and popping into my wife’s place of work to join her for lunch the next second—yeah, that tops my list. Teleportation for the masses! No more need for cars…no long-distance relationships… Wait. Hang on. That would also mean every set of in-laws everywhere could pop in to visit whoever they wanted to, whenever they wanted to. I might need to re-think this. 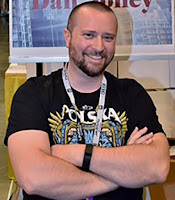 Dan Jolley started writing professionally at age nineteen. Beginning in comic books, he soon branched out into original novels, licensed-property novels, children’s books, and video games. His twenty-six-year career includes the YA sci-fi/espionage trilogy Alex Unlimited; the award-winning comic book mini-series Obergeist; the Eisner Award-nominated comic book mini-series JSA: The Liberty Files; and the Transformers video games War for Cybertron and Fall of Cybertron. Dan was co-writer of the world-wide-bestselling zombie/parkour game Dying Light, and is the author of the Middle Grade Urban Fantasy novel series Five Elements. Dan lives somewhere in the northwest Georgia foothills with his wife Tracy and a handful of largely inert cats. Learn more about Dan by visiting his website, www.danjolley.com, and follow him on Twitter @_DanJolley. 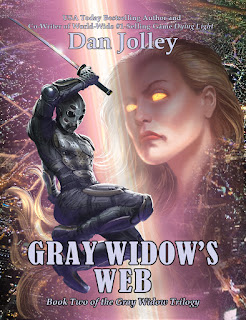 JANEY SINCLAIR never knew how or why she gained her ability to teleport. She never wanted it, and for years tried her best to ignore it. But when horrible violence shattered her world, she vowed to use her mysterious talent to protect the citizens of Atlanta, in an effort to prevent anyone else from suffering the kind of agony she had. Wearing a suit of stolen military body armor, Janey became known to the public as the GRAY WIDOW. But now the extraterrestrial source of her “Augmentation” is about to reveal itself, in an event that will profoundly impact Janey’s life and the lives of those closest to her— TIM KAPOOR, who barely survived the assault of twisted, bloodthirsty shapeshifter Simon Grove and still struggles to pull himself together, both physically and mentally. NATHAN PITTMAN, the teenager who got shot trying to imitate Janey’s vigilante tactics, and has since become obsessed with the Gray Widow. SHA’DAE WILKERSON, Janey’s neighbor and newfound best friend, whose instant chemistry with Janey may have roots that neither of them fully understand. And Janey’s going to need all the help she can get, because one of the other Augments has her sights set on the Gray Widow. The terrifying abomination known as APHRODITE LUPO is more powerful and lethal than anyone or anything Janey has ever faced. And Aphrodite is determined to recruit Janey to her twisted cause…or take her off the field for good. Unrelenting ghosts of the past clash with the vicious threats of the future. Janey’s destiny bursts from the shadows into the light in GRAY WIDOW’S WEB, leaving the course of humanity itself forever changed.

Barnes and Noble: https://www.barnesandnoble.com/w/gray-
at 7:00 AM