Tales from Harborsmouth by E.J. Stevens ~ One Day Left to Enter the Release Party Giveaway!! @EJStevensAuthor

There is still time to enter!

Keep reading for a chance to win an Ivy Granger Prize Pack, including a flashlight keychain, button, glow-in-the-dark fangs, and a collectible Passport to Ivy Granger booklet signed by the author. 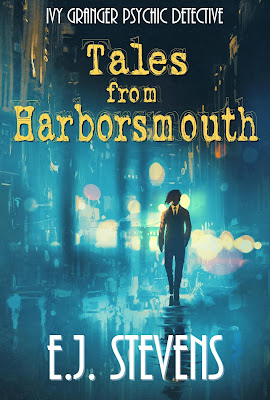 In Tales from Harborsmouth, readers get to delve deeper into the award-winning world of Ivy Granger.

Tales from Harborsmouth is the first time the Ivy Granger novellas are together in one collection and features two exclusive short stories the series prequel Frostbite and the newest Ivy Granger tale Thrill on Joysen Hill.

We're giving away fun swag prizes, but first, grab a cupcake and check out these teasers.

A detective’s job is to take note of the little things, the small details that can break a case wide open, but having anthropomorphic snot treat you like you smelled worse than a troll fart could give a girl a complex.
—Ivy Granger, Frostbite

I’d seen a lot in my nine lives, but nothing so strange as Ratfink’s Family Fun Palace and its tone-deaf taxidermied talent.
—Torn, Thrill on Joysen Hill

Want to read more books in this series? You're in luck.


Books in the Ivy Grainger Series:

Want to win fabulous swag? We've got you covered.

We are giving away an Ivy Granger Prize Pack, including:

To enter, use the Rafflecopter form below. This giveaway is INTERNATIONAL. Giveaway ends July 26, 2017 midnight EST. Good luck!

a Rafflecopter giveaway
at 10:50 AM