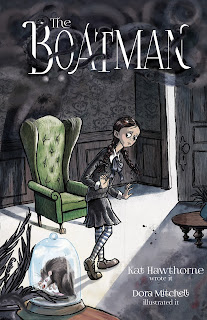 Tagline: Eleven-year-old Isabel Wixon retreats into a fantasy world to cope with her grief

Isabel Wixon is weird. Not only does she see dead things, but her list of friends consists of a talkative ventriloquist’s dummy and the gentlemanly spider that lives in her hair. Real friends? Too hard. Inventing friends is much easier. Inventing the Boatman—a terrible monster that lures kids into a strange sleeping sickness and never lets them go—probably wasn’t one of her better ideas though.

Izzy froze as the spirit of a young girl appeared before her. This morning, as she did on occasion, the girl had taken off her head. The ghost’s body hefted the head a few times, obviously fixing to lob it at Izzy. She stiffened. Izzy had never been hit by a detached head before, but she doubted it would be much fun.

“The Boatman is looking for you,” the ghost-girl said so quietly Izzy couldn’t be sure if what she’d heard was the ghost’s voice or the leaves on the trees above laughing as the rain tickled them. “You should be very careful not to—GAH!!”

Just then, and for no reason Izzy could see, the body fumbled and dropped the head. It crashed to the ground and began rolling away. “You cumbersome hunk of junk!” the head squealed as it bumped into a tree and came to an indelicate halt.

Blindly, the body bent over and began feeling around on the forest floor. Looking for something round, it located a large rock. It spent a few moments trying to lift it, but as everyone knows, ghosts cannot lift things. The head sighed. “Hello! I’m over here you brain dead oaf!” it hollered from its place near the tree. Finally, the body stumbled toward it.

After poking a finger in the head’s eye and shoving another up its nose, ghost-girl’s body heaved the head up by its stringy hair and placed it back onto its neck hole, spinning it around a few times as though it were screwing in a light bulb. When finally the head was fixed into place, though slightly crooked, the now-whole ghost-girl stretched as if she were stiff. “Silly, clumsy thing,” she said. “I swear, one day my body will lose me! How will I ever get a head then?” The ghost put a hand on her belly and chuffed at her own joke.

But not Izzy, she was too afraid to laugh. Instead, she swallowed. Usually when the headless ghost-girl appeared, Izzy ran away. But not today. There was something she’d been meaning to ask, and she knew that the only way to get the answer was to be brave and ask it. Besides, after the whole dropped head debacle and the thing about cracking jokes, the ghost seemed too distracted to be menacing. So Izzy stood as tall as she could and hoped the ghost would not notice her rattling knees. “Um,” she stammered, “who is the Boatman?”

The ghost crossed her arms over her chest. Her lips looked like a pair of bloated worms, particularly when they were pooched out, as they were right then. She tilted her head to the side, or at least she tilted it more to the side than it already was. “Did you just speak to me? Are you not frightened?”

“Yes—I mean no.” Izzy nodded and then shook her head. She peeled a slithering wet clump of hair off of her forehead. She looked back at the ghost, who still waited for an answer. “Oh...Um...I mean, yes I spoke, and no I’m not afraid.” It was half true at least.

The ghost-girl slumped, which made her seem far less frightening. “Really? Am I losing my touch? That would be the pits. I’ve been trying so hard.”

“Oh!” Izzy scrunched her eyebrows together. She didn’t want to hurt the ghost’s feelings. She simply hadn’t considered how the ghost must be feeling. After all, scaring people was the ghostly way. Everyone knew that.

Izzy scratched her pointy elbow then continued. “Well then, I admit that you’ve done a wonderful job scaring me these past few weeks. I mean, the head thing and the song—very creepy. Truly top notch material. However, I don’t know who this Boatman fellow is. I’m not sure if I ought to be afraid of him or not. Perhaps you could explain? That might help.”

The ghost rubbed her chin as if considering. “Well, if you think it will help.”

Theatrically, the ghost hovered a few inches off the ground and faded in and out as the trees swayed and small shafts of morning light blinked right through her. Her voice was low-pitched when she began to speak, very unlike the shrill soprano she took on while singing. “The Boatman is a hideous monster who lives in the world of dreams.” With this, the ghost waved her arm as if indicating that they were in the world of dreams currently. “He sails his rickety boat around on the lake of your thoughts. He is the one responsible for every nightmare you’ve ever had; he’s the one who controls your fear and...”

The ghost sighed and visibly deflated, seeming displeased by the quality of her storytelling. Izzy had to admit, the ghost’s tone had lost some pizazz as she went on. “Too over-the-top?” the ghost asked.

Kat Hawthorne is a nerd times three. Besides writing, she enjoys creating visual art and playing her cello. She is mother to three small boys, who are unwittingly the inspiration for her need to write. 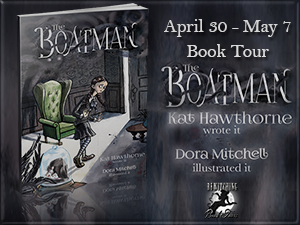