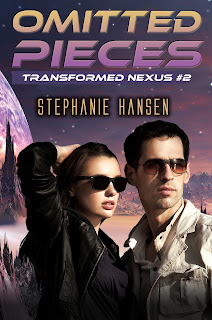 Omitted Pieces
Transformed Nexus
Book Two
Stephanie Hansen
Genre: YA SciFi
Publisher: Fire and Ice YA and Tantor Audio
Date of Publication: 03/01/22
ISBN: 978-1-955784-21-4
ASIN: B09MMF5QLQ
Number of pages: 268
Word Count: 67,302
Cover Artist: Caroline Andrus
Tagline: The amazing conclusion to the Transformed Nexus duology explores uncharted territory with dangerous compassion.
About the Book:
In “Omitted Pieces,” the conclusion of the Transformed Nexus duology, the year is 2164 and the new Sierra is on a new planet with a new problem. The mad scientist Cromwell has kidnapped her mother and set up shop on planet Scepter. In order to save her, Sierra will need the help of friends in this place of glowing leaves and a floating capital. Back on Vortex, Al has shut down the old facility, but will he be able to make it to Scepter? What about those who made it to Earth? Can they all work together or are they closer to danger than they realize?

Purchase Links:
Amazon     iBooks     BN     Linktree
Read an Excerpt:
I awake hungry and thirsty. Is this what the afterlife is like? I never expected Dr. Cromwell to follow through on his promise to put my conscience and memory in a qualified body. Hunger pains me again and I rise to find myself in a tropical forest. I’m surrounded by lush green, but the color is unlike any I’ve seen before. It’s as if the leaves are neon shining off of their surroundings. My body knows what to look for, even though I don’t. Where am I? What planet have I been transported to? Where’s Mom? I look down at it, this hourglass figure. I’d never been blessed with such curves in my sixteen-year-old body. I wonder if my dad will recognize me in this new one. I wonder if Al will still love me after everything? I also try to map out how to get home, but it’s all too much for this newfound body and I quickly find myself napping under a sea of green.

I’m roused by a series of clicks and identify the circular metal in front of me immediately out of place as it may be.

“I told ‘past’ you your mission was full of danger, Sierra.”

“How long has it been since I lost consciousness?”

“I calculate two weeks and five days since the ‘new’ you left Planet Vortex.”

“What? How have I been out for that long? Where’s Al? Did the shuttle make it to Earth?”

There’s a stream of beeps. “My universe data scan shows that the Al you’re asking about still has a pulse. It’s the Al ‘old’ you met on Planet Vortex, right?”

My heart warms, it beams. “Yes. Wait, your universe data scan, what’s that?”

“The World Government equipped all clopils with new scanners and applied all Counter Friction strings when the Planet Vortex revolution hit the news. The scan also shows that everyone who had been on your scheduled shuttle made it to Earth. The processes at the medical facility ended, too, but more on that later. We need to get to your mother.”

Mom, are you okay? I try to reach her telepathically, the way I had back on Vortex.

I’m fine. Just need to figure out where I am exactly.

“Sierra, there’s much at stake. We must embark on our journey at once,” Vex says.
Sunrays stream through openings in the canopy of leaves above us as we hike. I keep having to reassure myself it’s me when I look down and see someone else’s smaller feet. At least Cromwell dressed this body in proper attire. I don’t know what I’d do without these boots. Vex, on the other hand, is not well equipped for this terrain at all. He was made for modern city living.

He’s used some of the tools he brought to lengthen his arms in order to help, but I keep assisting him, wishing he’d move faster. I think being locked up in the Vortex facility for so long gave me a sort of cabin fever. Now, being out in the open, I want to stretch my (these, no my, oh whatever) legs and cover the ground between us and Mom as quickly as possible.

Also, the weight’s gone. My legs had felt like they were filled with lead because of the guilt. But now, now that Viscerous and Albina are alive and safe on Earth; now that Pixie’s where no more harm can be done (well, no more harm than a painful exam in the graduate mathematics program at Stanford); now that Dad is free and no longer having to save Cromwell’s subjects, my legs feel light as air.

Mom, we’re headed to you. How are you doing? I wait for what seems like an eternity, but she doesn’t respond. 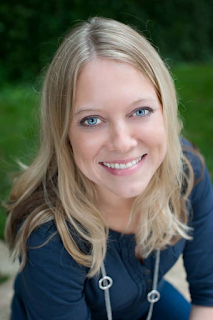 Meet the Author:
Stephanie Hansen is a PenCraft and Global Book Award Winning Author. Her novella series, Altered Helix, released 2020 and book one of the Transformed Nexus duology, Replaced Parts, released 2021. Her short story, Break Time, and poetry has been featured in Mind's Eye literary magazine. The Kansas Writers Association published her short story, Existing Forces, appointing her as a noted author. She has held a deep passion for writing since early childhood, but a brush with death caused her to allow it to grow. She's part of an SCBWI critique group in Lawrence, KS and two local book clubs. She attends many writers' conferences including the Writing Day Workshops, New York Pitch, Penned Con, New Letters, All Write Now, Show Me Writers Master Class, BEA, and Nebraska Writers Guild conference as well as Book Fairs and Comic-Cons. She is a member of the deaf and hard of hearing community. 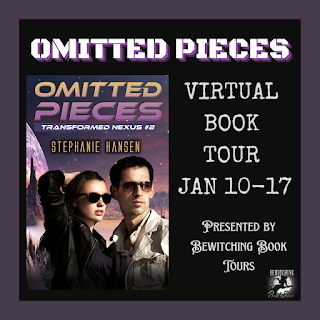