Book Excerpt Tour & #Giveaway ~ She’s the One Who Doesn’t Say Much (Book Four of the War Stories of the Seven Troublesome Sisters) by S.R. Cronin @cinnabar01 @GoddessFish

She’s the One Who Doesn’t Say Much

Book Four of the War Stories of the Seven Troublesome Sisters 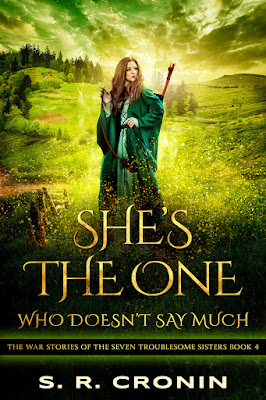 Do you know what your problem is?

Olivine knows hers. This quiet thirteenth-century artist has been hiding a secret as she travels to K'ba to meet her friends. Others assume she's fallen in love with another artist, but it's much worse than that. For on the way to K'ba is the dirt poor nichna of Scrud, a place scorned by other Ilarians. And in Scrud is the one man who understands her.


However, Bohdan recognizes the dangers posed by an impending Mongol invasion. When he learns of Olivine's unusual visual powers, he convinces her to pick up her bow and start practicing.


She does, though she's more concerned with moving to K'ba where she can paint all day and see Bohdan whenever she wants. If only her sister hadn't decided Olivine and her fellow long eyes held one key to defending the realm.


Then, as if life wasn't complicated enough, Olivine learns the artist community she yearns to be part of has developed a different take on the invasion. They're sure the only way to survive is to capitulate completely to the Mongols’ demands. Artists who feel otherwise are no longer welcome.


Where does her future lie? The invasion is coming soon and Olivine doesn't have much time to decide.

A brisk autumn wind blew the fallen leaves around the next day as three Svadlu rode up to our farm. My heart raced when I saw them approaching. Had they come to warn us that the dreaded Mongols crossed our borders? Or had they come to take my father, forcing a gentle intellectual into our desperate army?

In normal times, the Svadlu were an elite peacekeeping force. More people wanted to join than were admitted, and my father would have been turned away if he’d tried. But all the talk of invasion had forced our Svadlu to lower their standards. I’d heard their encouragement efforts had grown more aggressive as winter approached.

A third fearful possibility lurked. They seldom admitted women; females had to be uncommonly adept at fighting to get in. My twin sister and I wouldn’t meet their lowest standards, but Sulphur would. She was physically strong and fierce inside. As the third of seven girls, she’d often stepped in as our protector, serving as the brother we lacked.

Dad or Sulphur? I didn’t know what possibility was worse.

Then my dad and the three Svadlu looked at Sulphur and I knew. They had come to take my sister. My heart froze with fear for her.

“Did you girls know the Svadlu want to double their numbers before winter comes?” my dad said.

“I heard about that in the market,” Celestine replied.

The man who appeared to be in charge spoke. “We targeted your farm because we’ve heard there’s a daughter here with fighting skills.” The soldier barely glanced at me and Celestine before he turned to our older sister. “Would you come with us?”

This couldn’t be happening! It was awful for Sulphur, and with her gone Celestine and I would struggle even harder for the freedom to set up the lives we wanted.

“Are you going somewhere I wish to go?” she answered them with a grin. I looked closer. She was about to be forcibly conscripted and she looked as happy as I’d ever seen her. My fear made its way to understanding.

Oh, no. She wanted to join the army.

What could I do but be happy for her? 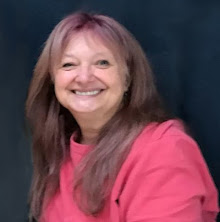 Sherrie Cronin is the author of a collection of six speculative fiction novels known as 46. Ascending and is now in the process of publishing a historical fantasy series called The War Stories of the Seven Troublesome Sisters. A quick look at the synopses of her books makes it obvious she is fascinated by people achieving the astonishing by developing abilities they barely knew they had.

She’s made a lot of stops along the way to writing these novels. She’s lived in seven cities, visited forty-six countries, and worked as a waitress, technical writer, and geophysicist. Now she answers a hot-line. Along the way, she’s lost several cats but acquired a husband who still loves her and three kids who’ve grown up just fine, both despite how odd she is.

All her life she has wanted to either tell these kinds of stories or be Chief Science Officer on the Starship Enterprise. She now lives and writes in the mountains of Western North Carolina, where she admits to occasionally checking her phone for a message from Captain Picard, just in case.

S. R. Cronin will be awarding a $20 Amazon or B/N GC to a randomly drawn winner via rafflecopter during the tour.