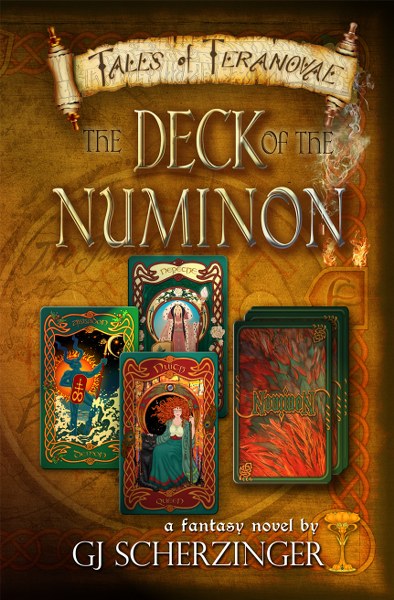 Full Color Illustrations
With a turn of the cards, a Stone Giant breaks loose from the Granite Mountains, leaving a path of destruction through the Regency of the Stands. The fabled guard towers of Safrasco are destroyed by a sorcerous griffin, the threat of war rising in its wake. Captain Ferriman turns to a blind herb trader named Cerra Meadows in the hopes she can help him navigate the sorcerous paths that threaten the peace of the Empire.
The Cards are drawn, the cast put into play. The Deck is ruled by the majics that created it. Events take on a life of their own, reliant on the strengths and motivations of the players whose avatars are determined by the draw. The Queen of Quills represents qualities that Cerra must embrace in order to discover the identity of the Seer and locate the Cards before her world runs out of Time.
Add to Goodreads
Purchase Links:
Amazon * Blue Rune Publishing

Greg Scherzinger spent the bulk of his career as a TV Producer and Director, and skiing as much as possible in the Western mountains and the Alps, before leaving the broadcast business and spending the next 13 years living on a 41' yawl in NW Washington. He has sailed the Inside Passage, the Gulf of Mexico and the Bahamas. The author's newest book, “The Henna Witch”, along with "The Wizard of Grimmer's Wharf", was written after he moved to a small farm in the coastal hills of his native Oregon. "The House on Chambers Court" was penned while living in Todos Santos, Baja California Sur in Mexico. He wrote his first book, "Demon of the Black Gate" while residing in the San Juan Islands.
Website * Facebook * Facebook * Twitter * Bookbub * Amazon * Goodreads

Follow the tour HERE for special content and a giveaway!
$25 Amazon Gift Card,
Print Copy of Book and 3 Illustrated Tarot Cards
– 1 winner each
a Rafflecopter giveaway