This post is part of a virtual book tour organized by Goddess Fish Promotions. Connie di Marco will be awarding a $20 Amazon or B/N GC to a randomly drawn winner via rafflecopter during the tour. Click on the tour banner to see the other stops on the tour. 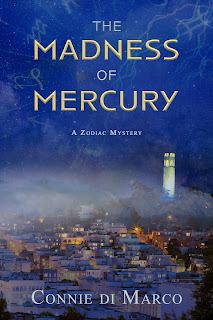 About the Book:
The Zodiac Mysteries feature San Francisco astrologer, Julia Bonatti, who never thought murder would be part of her practice. Julia sought answers and found solace in astrology after the death of her fiancé in a hit and run accident. Since then, she’s successfully built a clientele of the city’s movers and shakers.

In The Madness of Mercury, Julia’s outspoken advice in her newspaper column, AskZodia, makes her the target of a recently-arrived cult preacher who advocates love and compassion to those less fortunate. But the power-hungry preacher is waging war on sin and his Army of the Prophet will stop at nothing to silence those who would stand in his way. Julia is at the top of his list.
My Review and Rating:

Life is good for Julia Bonatti. She has a thriving astrology career plus she writes a column for the local paper. After her response to a submitted question involving the cynicism of a cult leader, his practices, and the religion as a whole, Julie finds her world crumbling. Seeking solace and safety, she temporarily stays in the estate of a wealthy pair of elderly ladies, Evandra and Eunice, who are currently under the care of their niece, Dorothy. Things really begin to heat up when Evandra starts displaying odd behavior and Eunice leaves home to join up with the cult leader at his compound.

The author does a wonderful job incorporating a lot of astrology into the story. As someone who isn't really interested in astrology, I didn't relate to Julia in that aspect but I found her to be a great character, likeable, and fun. Yes, I read the synopsis and was aware of the content, but I was more interested in the story after reading the synopsis and was willing to give the book a try. I'm glad I did, as I was able to push the astrology parts aside and focus on the characters and the plot.
The multi-faceted story line kept me engaged and interested. The goings on within the sisters' estate, along with the threats from the cult that invaded San Francisco, will have the reader pushing on with anticipation. The character development and world building was done well and nothing was lacking. The mystery wasn't easily solvable and I found that the couple people I thought could be responsible were not, so the author did a great job building up the mystery without giving anything away early.

Cozy mystery lovers will enjoy this first book in the Zodiac Mystery series.

I was provided a copy of this book to review.

Read an Excerpt:
As I stood in line at the checkout counter of the bookstore an uncomfortable feeling stole over me. Was I being watched? I turned slowly and surveyed the customers in line behind me. No one looked suspicious. No one turned away suddenly. Just holiday shoppers focused on their own business. As I turned back, my eye caught someone standing at a table close by, separated by a metal bar from the line of shoppers. A man, dark hair, black jacket, seemingly immersed in a book he was holding in his hands. No shopping bags in sight. Something about him . . . I mentally shook myself, pushing the thought out of my mind. I was being paranoid. Nerves were getting the better of me.

When I reached the street, the wind had picked up. Shoppers were doing their best to hang onto their packages and hats and scarves. I pulled up the hood on my coat and, protecting my few finds, headed back to the square. I climbed the steps to the top of Union Square and took cover inside the small coffee shop. The aroma of freshly ground beans filled the space. I ordered a cappuccino and carried it gingerly to a stool near the window where I could watch the skaters on the ice rink under the tree. Maybe this was picking at old wounds. Maybe I just wanted to remember a happier time.

The windows were completely fogged. I rubbed the condensation away with the sleeve of my coat and peeked out. The top of the seventy foot tree and its huge bulbs swayed back and forth in the chilly gusts. Michael and I used to skate here. He was hopeless on his rented skates and wouldn’t believe me when I told him it wasn’t his ankles, his skates were too large. We’d manage a few passes around the rink, before we’d collapse, laughing on the ice. For a split second I saw his smile and felt the warmth of his hands, remembering how safe I felt when he put his arms around me. An aching so acute swept over me I didn’t trust myself not to burst into tears. What is it about the holiday season that brings our missing pieces into such sharp focus? Loss and pain may be there at other times, but somehow it doesn’t hurt quite so acutely. Maybe stopping here wasn’t such a good idea. I needed to quit feeling sorry for myself. Michael would have been disgusted with me. I was pathetic. I snuffled and rummaged in my purse for a tissue, blowing my nose and wiping my eyes, hoping anyone watching would think I was down with the flu. Suck it up, Julia.

Bundling up against the cold, I retraced my steps and approached the garage entrance. Two people, a man and a woman, doing their best to stay warm under the overhang of the garage were handing out flyers. One stepped in front of me, blocking my path and shoved a flyer at me. Annoyed, I grabbed it and walked briskly into the garage. I glanced down at an announcement of services at the Prophet’s Tabernacle. I sighed, and crumpling the paper up, tossed it in a nearby trash can.

I took the elevator down to the lowest level where I had parked. I stepped out and glanced around. In contrast to the crowds of people above on the streets, not a soul was in sight. I felt a frisson of fear. Why was it so deserted? My nerves were just on edge, I decided. I was imagining threats where there were none. I took a deep breath and hurried to my car. I unlocked the door and threw my bags onto the passenger seat. Before I could turn the key in the ignition I glanced in the rearview mirror. A face in a ski mask stared back at me, the eyes bright in the ambient lighting. A gasp caught in my throat. My heart raced as a gloved hand pulled my head back and covered my mouth. I felt the sharp prick of a knife point at my neck. I froze. I couldn’t move. I couldn’t speak.

“Forget about the Prophet. Make sure you keep your big mouth shut or my next visit won’t be so nice,” he growled. He pulled the knife away, let go of my jaw and jumped out of the car.
Purchase Links:
Amazon: https://amzn.to/3dFvE12
BN: https://www.barnesandnoble.com/w/the-madness-of-mercury-connie-di-marco/1123116591 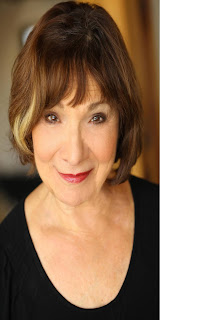 Connie di Marco is the author of the Zodiac Mysteries featuring San Francisco astrologer Julia Bonatti. The Madness of Mercury, the first book in the series will be re-released in October 2020.