A Circle Of Dead Girls 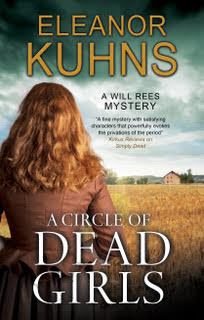 In the spring of 1800, a traveling circus arrives in town. Rees is about to attend, but sees his nemesis, Magistrate Hanson in the crowd, and leaves. On the way home he meets a party of Shaker brothers searching for a missing girl. They quickly come across her lifeless body thrown into a farmer's field. Eleanor Kuhns is the 2011 winner of the Minotaur First Crime novel competition for A Simple Murder. She lives in upstate New York. A Circle of Death Girls is Will Rees Mystery # 8.

This is a rafflecopter giveaway hosted by Partners in Crime Virtual Book Tours for Eleanor Kuhns. There will be 5 winners of one (1) Amazon.com Gift Card each. The giveaway begins on September 1, 2020 and runs through October 2, 2020. Void where prohibited.