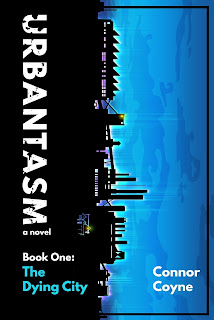 Urbantasm is a magical teen noir serial novel inspired by the author’s experiences growing up in and around Flint, Michigan.

Thirteen-year-old John Bridge’s plans include hooking up with an eighth-grade girl and becoming one of the most popular kids at Radcliffe Junior High, but when he steals a pair of strange blue sunglasses from a homeless person, it drops him into the middle of a gang war overwhelming the once-great Rust Belt town of Akawe.

John doesn’t understand why the sunglasses are such a big deal, but everything, it seems, is on the table. Perhaps he accidentally offended the Chalks, a white supremacist gang trying to expand across the city. Maybe the feud involves his friend Selby, whose father died under mysterious circumstances. It could even have something to do with O-Sugar, a homegrown drug with the seeming ability to distort space. On the night before school began, a group of teenagers took O-Sugar and leapt to their deaths from an abandoned hospital.

John struggles to untangle these mysteries while adjusting to his new school, even as his parents confront looming unemployment and as his city fractures and burns.

“A novel of wonder and horror.”— William Shunn, author of The Accidental Terrorist


Read an Excerpt from Book 1:

I have to become the Antichrist.
I realized this one night when I was standing on an overpass looking down through a chain-link fence onto the expressway below. Blue neon light shined off icy puddles. The gutters were flush with slush. Empty houses, ragged wrecks, hung out on tiny lots to my left and right. Beneath me, the cars that this city had built were leaving it – some of them forever. Across from me, on a rusted trestle, a freight train slowly passed, bringing in the parts for more cars.
As the train moved on through, I thought about Drake and about how God had fucked him over. How he’d fucked us all over. Then I thought about the house with Jesus graffitied on its side. Orange skin, blue eyes, green thorns. A welter of wounds. I clenched my jaw and my teeth squeaked together. Across from me, the train wheels squealed.
If I wanted to save my friends, I would have to murder God. 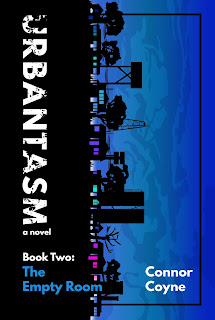 Urbantasm: The Empty Room is the second book in the magical teen noir serial novel inspired by the author’s experiences growing up in and around Flint, Michigan.

John Bridge is only two months into junior high and his previously boring life has already been turned upside-down. His best friend has gone missing, his father has been laid-off from the factory, and John keeps looking over his shoulder for a mysterious adversary: a man with a knife and some perfect blue sunglasses.

As if all this wasn’t bad enough, John must now confront his complicated feelings for a classmate who has helped him out of one scrape after another, although he knows little about who she is and what she wants. What does it mean to want somebody? How can you want them if you don’t understand them? Does anybody understand anyone, ever? These are hard questions made harder in the struggling city of Akawe, where the factories are closing, the schools are closing, the schools are crumbling, and even the streetlights can’t be kept on all night.

John and his friends are only thirteen, but they are fighting for their lives and futures. Will they save Akawe, will they escape, or are they doomed? They might find their answers in an empty room… in a city with ten thousand abandoned houses, there will be plenty to choose from.


Read an Excerpt from Book 2: 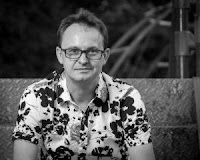 Connor Coyne is a writer living and working in Flint, Michigan.

His first novel, Hungry Rats, has been hailed by Heartland prize-winner Jeffery Renard Allen as “an emotional and aesthetic tour de force.”

His second novel, Shattering Glass, has been praised by Gordon Young, author of Teardown: Memoir of a Vanishing City as “a hypnotic tale that is at once universal and otherworldly.”

Connor’s novel Urbantasm, Book One: The Dying City is winner of the Next Generation Indie Book Awards 2019 Young New Adult Award.  Hugo- and Nebula-nominee William Shunn has praised Urbantasm as “a novel of wonder and horror.”

Connor’s essay “Bathtime” was included in the Picador anthology Voices from the Rust Belt. His work has been published in Vox.com, Belt Magazine, Santa Clara Review, and elsewhere.

Connor is on the planning committee for the Flint Festival of Writers and in 2013 he represented Flint’s 7th Ward as its artist-in-residence for the National Endowment for the Arts’ Our Town grant. In 2007, he earned his Masters of Fine Arts in Creative Writing from the New School.

Connor lives in Flint’s College Cultural Neighborhood (aka the East Village), less than a mile from the house where he grew up. 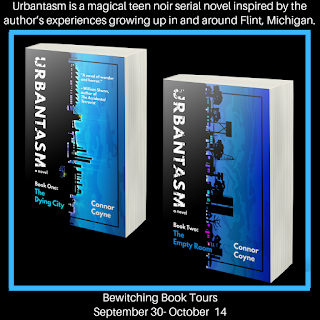