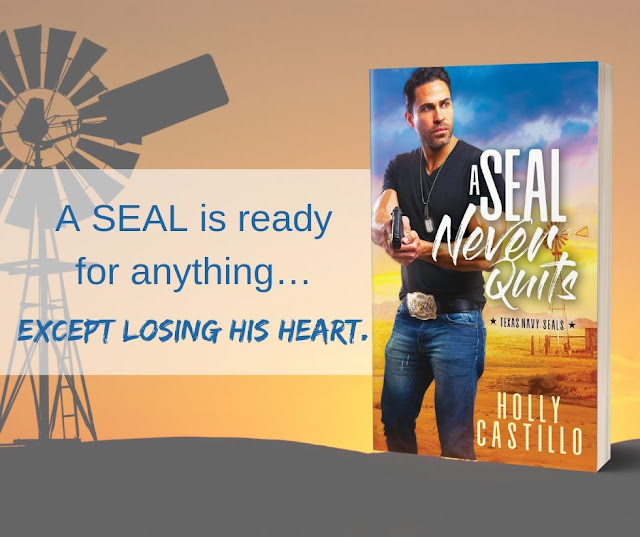 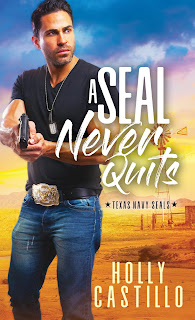 
First in a thrilling romantic suspense series featuring a band of do-or-die Navy SEALs in Texas.

A SEAL is ready for anything…except losing his heart…

Lieutenant Amador “Stryker” Salas and his tight-knit Navy SEAL team are undercover on a Texas ranch and tasked with covert ops across the border. It’s an assignment that requires all their skills, all their secrets, and all their know-how.

Anya Gutierrez, the local veterinarian, has been serving the ranch for years. She loves the animals and ranching life, and Stryker finds her a breath of fresh air in his otherwise rigidly disciplined existence.

When Anya gets caught in the crosshairs of a mission gone sideways, Stryker must tell her the truth about who he really is, risking everything to keep her out of harm’s way, even if it destroys him…

Holly Castillo lives on an80 acre ranch, surrounded by cattle during the day and hearing the howl of coyotes by night. She has endless inspiration for her writing. Holly’s romantic suspense series about heroic Navy SEALs is set in her own backyard of south Texas. She lives with her husband and two children just south of San Antonio. Visit her online at hollycastillo.com/.

She had just lifted her hand for the doorbell when the door was yanked open by a man who could have been Stryker’s brother. His skin was lighter, and while Stryker’s hair had a slight wave to it, this man’s hair was straight and cropped rather short. He was tall, and, in his simple T-shirt and jeans, his muscles were obvious. He looked at her, then smiled, though it seemed it wasn’t something he was used to doing.

“You must be the veterinarian,” he said, and held the door open a little farther. “Come in.”

A wave of cool, air-conditioned air welcomed her into the foyer, and her eyes drank in the beautiful architecture and design of the house. She couldn’t see anything that reminded her of the previous house. It was as if the entire place had been gutted, and they had started over.

“My name’s Phantom, by the way,” her door greeter said, extending his hand to her.

She smiled up at him as she shook his hand. “I’m Anya Gutierrez. Are you—do you live here now too?”

He nodded. “I’m here, along with Stryker and four other men. Buzz is the newbie to the ranching world, so if you see a guy who looks totally out of place, that’s him.”

Anya grinned at him. “I’m sure you’re going to educate him just fine.”

The sound of boots on the hardwood floors came from somewhere within the house, and Stryker suddenly rounded the corner and faced both of them. He eyed Phantom for a moment, then turned his full attention on Anya. “Are you ready to go?”

He was dressed in a navy-blue button-down shirt and a pair of jeans that fit him perfectly. Anya felt like asking him to turn around so she could get the full picture. Good grief, this man is turning my mind to mush. She felt the heat of a blush burning her face. “Y-yes,” she stammered. “I’m ready to go.”

“Be back later,” he tossed over his shoulder to Phantom, as he opened the door and placed his hand at the small of Anya’s back, guiding her out the door in front of him.

The feel of his hand through the cotton of her polo shirt sent a small thrill through her. She had to remind herself to breathe as he escorted her to his F-250, which already had the gooseneck trailer attached to it. It was a big trailer, and she knew they’d be able to bring home at least ten or more calves. It would be a good addition to his current cattle, especially since he had about twenty-five head that were ready to be auctioned off to make room for some heartier heifers.

The ride to Kingsville was punctuated by the sounds of the latest country music coming through the radio. Anya had come prepared for the drive with her ledger and a stack of invoices she needed to record before mailing them out. Stryker had taken one look at her paperwork, raised an eyebrow, and then returned his eyes to the road.

They hadn’t talked since the first day she had met him, and only briefly when she had called to tell him about this sale. She’d hesitated even to call him, but she’d made a commitment. She hadn’t expected him to say yes.

They pulled up to the sale arena where the Kleberg-Kenedy County Junior Livestock Show was held every winter, and Anya remembered with fondness her years showing cattle and goats and even some turkeys. She had won the title of County Stock Show Queen when she was sixteen, and then had gone on to win the County Rodeo Queen when she was seventeen. She still had her tiaras and sashes.

“What on earth has put that look on your face?” Stryker asked. She realized at that moment they’d parked and she was still sitting in the truck with a goofy look on her face.

“Dreams,” she replied with a smile. “Haven’t you heard of them before, Stryker?”

Her quip at his expense seemed to take him by surprise. He shook his head at her, then left the truck. “Well, you’re about as much fun as getting a root canal,” Anya said to herself, before her door was yanked open and Stryker stood looking up at her impatiently.

She hopped down from the truck and instantly had to scramble to get her feet set right underneath her on the muddy ground. Suddenly Stryker’s muscular arm snaked around her waist, and he pulled her to him, holding her tight.

She was hit with the scent of his spicy cologne, leather, and man—pure, hearty man—and her hands immediately pressed against the front of his shirt as her feet settled beneath her. But her mind and body were far from settled.

He leaned down and the feeling of his lips brushing lightly against her ear caused her heart to thunder so hard, she was afraid it would beat out of her chest. “Just for your information, I can be far more fun than a root canal…You just have to know what to ask for.”

a Rafflecopter giveaway
at 7:48 AM