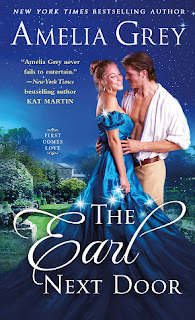 What does a Wickedly Wonderful Widow really want? One noble suitor is about to find out. . .

Adeline, Dowager Countess of Wake, is all on her own after her husband’s sudden death. The good news? Losing him allowed her to find herself. Finally, Adeline is free to do, go, and be as she pleases. She cherishes her newfound independence and is not looking for another man to wed. But seeking out a new lover? Well, that is a whole ’nother story. . .

Lord Lyon, son of the two-timing Earl of Marksworth, wishes to have a respectable, loving wife someday. When he meets the beautiful and self-reliant Adeline, Lyon is instantly smitten. But Adeline would rather have the handsome suitor in her bed than to take his hand in marriage. It’s a scandalous proposal—and one that’s hard for Lyon to refuse. Unless the fire of his passion can melt Adeline’s resolve. . .and he can find a way to be the Wickedly Wonderful Widow’s lover for all time?

The Earl Next Door by Amelia Grey
My rating: 4 of 5 stars

Adeline, Lady Wake, has just returned to London after being kept at confined in her late husband’s country home. Since his death, she has moved back to London and purchased a home with an outbuilding perfect for a boarding school for girls. The home and building happen to be right next door to Lyon, the Earl of Lyonwood, who mistakes the home for something else, scares the children, and fights his growing attraction to his widowed neighbor.

The Earl Next Door is the first book in a new historical romance series by Amelia Grey. I really enjoyed the interactions between Adeline and Lyon. They banter, they butt heads, they aggravate each other, and they have fun together. Adeline and Lyon found in each other what they didn’t realize they desired. The misunderstandings threaded throughout the book are reminders that relationships aren’t perfect, and it is important to communicate.

What especially drew me into the book is Adeline’s quest to help the young daughters of the men who perished with her husband. In historical London society, it wasn’t unheard of for women without ties to a man to resort to brothels to make ends meet. In many cases, single women were not allowed the provisions to sustain a livelihood. The school Adeline and two of her friends established hopes to provide the girls with skills that will serve them well and keep them out of the houses of ill repute.

The emotional scenes in the book made my heart ache for Adeline. How she was treated and talked to by her former husband was despicable. His willingness to find what he supposedly needed in the arms of someone else was a slap in the face to his wife – and near the end of the book it gets even worse. I was distraught for Adeline. I realize that happened a lot and I know it still does but the acts are unacceptable regardless of the time period. She, of course, handled things will the grace expected of Lady Wake, but what a miserable two years of marriage and a horrible turn of events after she opens the school.

I enjoyed The Earl Next Door. The story was fun, engaging, and the antics between Adeline and Lyon were entertaining. I have yet to read a poor historical romance from Amelia Grey. The author’s books are fantastic, flow well, and have likable characters.