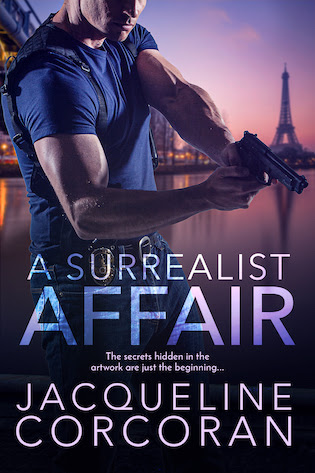 Elle Dakin is shocked when she’s given the opportunity to fly to Paris to attribute a newly discovered painting to her favorite artist. After all, why would they choose a broke, struggling Art History doctoral student for such an honored task? When she arrives in Paris, she realizes the deal was too good to be true—suddenly she’s neck deep in a murder, an international art theft, and threats to her safety. Thank goodness Ryan, an art exporter, comes to her aid, protecting her from the dangerous side of Paris and those who would try to harm her. And it doesn’t hurt that he’s sinfully handsome…until she discovers he has just as many secrets as everyone she’s met on this trip of a lifetime gone wrong…

The last assignment undercover FBI agent Ryan DeLong wants is to investigate art theft. But here he is, stuck in Paris, chasing down the thieves of a million-dollar masterpiece. The only bright spot is Elle, the shy but enchanting doctoral student who teaches him about more than just the beauty of Surrealism. He can’t tell her the truth of his identity, plus he refuses to get romantically involved with anyone while he’s on a case. But when he learns Elle also has things to hide, he begins to doubt everything he thought he knew about her.

As she sipped the heavy red wine, she looked around. Typical of galleries, the space was cavernous compared to the amount of work actually displayed. Her gaze traveled up the front-and-center piece, a lavender line of lights in the unmistakable shape of a phallus that stretched up the entryway to the cathedral-high ceiling. That had not been there earlier. Babette’s staff must have spent all afternoon installing it.

When she shifted her gaze, she felt her eyes widen. Out of two million people in Paris, it was

the same man that had saved her from the pickpocket in baggage claim! Her heart beat so hard, it made her blood feel like it was fizzing. Was it the wine? She’d only had a few swallows.

She realized her gaze had been locked on his. Neither of them smiling, it seemed like foreplay, and her stomach dove deliciously, as if she had taken a sudden dip on a rollercoaster.

All of this was going through her and yet, she stood motionless. She was afraid she was going to topple over and make a fool of herself, when she’d never wanted to impress anyone more.

Her face grew warm. Part of it was the force of their eye contact, but it was also at the blatant symbolism of that lavender installation, a visible sign of what throbbed between them.

Jacqueline Corcoran was born in England, but has lived in the U.S. for most of her life - in Boston, California, Michigan, Texas, and now in the Washington D.C. area with her husband, two children, and three rescue animals. She is a social worker, psychotherapist and professor (at the University of Pennsylvania), as well as an author. Her published work includes 17 textbooks, two non-fiction trade titles, and several novels.