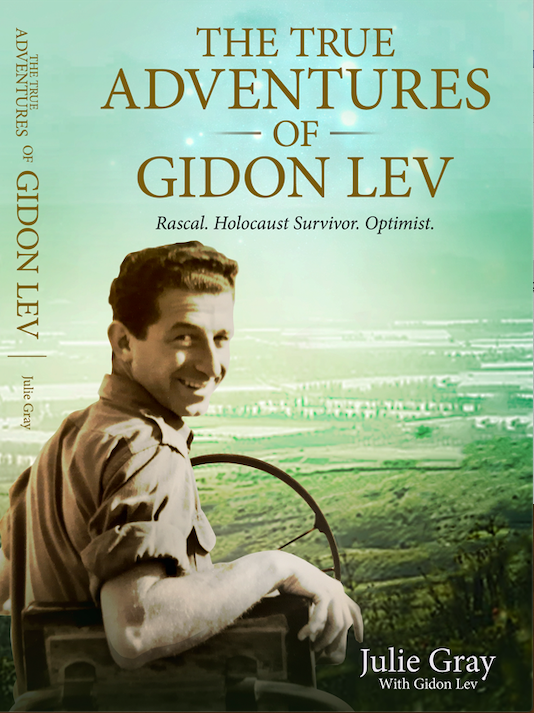 Of the approximately 15,000 children imprisoned in the Nazi concentration camp of Térézin (Theresienstadt ) near Prague, less than 100 survived. Gidon Lev is one of those children.

On the face of it, The True Adventures of Gidon Lev is the story of an elderly Holocaust survivor—a man who made it through horrifying events and lived to tell the tale. But Gidon (pronounced “Gid-awn”) did more than survive—he thrived. Gidon’s is the story of a little boy who never truly grew up, with a desperate need to belong and to build a family for himself. His story spans the beginnings of a fledgling country, a first marriage gone seriously wrong, a second marriage that lasted for over forty years and a late-in-life relationship with a writer and editor, thirty years his junior with whom his adventures continued, apace.

Julie Gray was born in 1964 in the San Joaquin Valley in California. A longtime Huffington Post contributor, Julie has been published in the Sanskrit Literary Journal, Moment Magazine, The Times of Israel, MovieMaker Magazine, Script Magazine, and Hip Mama. Her essay "The Freaking Autumn of My Life" was included in the anthology "Aging: An Apprenticeship." A veteran essayist and editor, Julie moved to Israel in 2012 and is working on her memoir "They Do Things Differently Here."