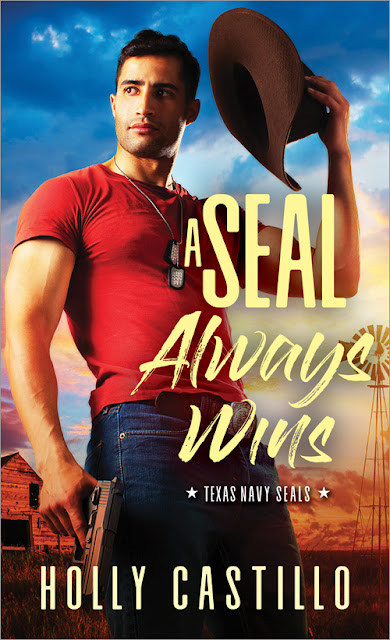 She manages to surprise him in every way that matters…

Elite Navy SEAL Enrique “Phantom” Ramirez is trained to expect the unexpected, but his growing feelings for brilliant horse trainer Elena Garcia catch him completely off guard. Phantom needs Elena’s help to maintain his SEAL team’s cover—more critical than ever now that they’ve identified a conspiracy of mysterious power brokers in both Mexico and the U.S. But how can he get her to train the ranch’s quarter horses without revealing who he really is? And without revealing his need for this woman whose indomitable spirit has captured his heart…
Purchase Links:

The sound of boots on the hardwood floor drew their attention, and Anya’s eyes lit up as Stryker came striding into the room. At first he had eyes only for Anya, but Elena saw his gaze flick over to her briefly. He leaned down and pressed a tender kiss to Anya’s lips and she leaned up into the touch, her hand resting on his chest for a moment.
“Stryker, I want you to meet my best friend, Elena Garcia.” Anya gestured toward Elena, and she smiled brightly. So this was the man who had claimed her best friend’s heart. Elena had interacted with him months ago when he and his friends first bought the ranch and began remodeling the outdated ranch house into the beautiful home it had become. Their conversations had been limited to her work with the horses.
Elena stood and extended her hand. He smiled at her. “I seem to remember you lurking around when we were remodeling this place.”
“‘Lurking’ isn’t the term I would use,” she replied with a smile. “I was working quite hard.”
“That was around the time you won the Grand Champion trophy in Corpus, wasn’t it?”
Phantom’s voice came out of nowhere, gentle, and could that be with appreciation? He hadn’t made any noise to alert her he had come into the room. She turned and found him leaning against the dining room wall. How long had he been there?
“Yes, it was,” she said, watching his face for a reaction. If she wanted him back as a client, she needed him to fully understand how good she was with his horses. Knowing that he had seen the trophies she had won was a step in the right direction.
He watched her for a long moment, finally breaking eye contact to glance over at Anya and Stryker, who seemed to be in their own world. “When you have a moment,” he said, returning his gaze to her, “I’d like to take you out to the barn. It won’t take very long.”
Had he finally decided he needed her on the ranch after all? Was she about to get her client back? Elena’s heart pounded with hope. She glanced over at Anya, but she seemed fixated on Stryker. “I’m going to step out to the barn for just a bit,” she said, though she doubted Anya heard her. Spying the sugar cubes still on the table for their coffee, she grabbed a few and stuffed them in her pockets as she stood.
She smiled to herself. Anya had fallen in love, something she’d never thought would happen. From the looks of it, she was beyond happy, which made Elena happy. She only wanted the best for her friend, and if Stryker brought that look of joy to Anya’s face, Elena would support her no matter how crazy it seemed.
Elena looked up to find Phantom watching her intently, measuring every expression on her face. Nerves kicked into high gear in the pit of her stomach. Hope could be a dangerous thing. He turned and led her out of the house and toward the barn.
“You seem to be very close to Anya.”
Was he trying to have a conversation with her? The day had been full of surprises already, and he seemed to be the lead instigator of most of them. She crossed her fingers that the surprises continued to be positive ones. “We’ve been best friends since we met in college. We’ve been through a lot together.”
“I can understand that bond.”
“Do you have a best friend?” she asked, then realized how lame that must sound. “I mean… Well, surely you must have a best friend. What I meant was—”
He glanced sideways at her and flashed her a smile—a real smile—and it took her breath away. The warmth in that smile turned his tanned skin a deep, molten bronze. The short haircut couldn’t hide the slight wave in his hair, which made his face look less severe and intense. His dark-gray eyes—a color she’d never seen before—lit up and softened, the steel becoming magnetic and drawing her in. The corners of his eyes crinkled when he smiled, adding an extra layer of humanity she had thought he lacked. The man made of stone suddenly seemed more approachable than she would have imagined.
“What are you saying? You think I can’t make friends? I know we didn’t get off on the best foot, but do I strike you as that unpleasant?”
“No! I mean, of course not. Just because you don’t like me or, um, didn’t need me…um…” Hell, she was making a total mess of the conversation. She became annoyed with herself—and with him. He had put her in the predicament to begin with.
“I never said I didn’t like you.”
“You didn’t have to,” she replied, then nearly bit her own tongue. If her goal had been to win him back as a client, she was doing an exceptional job of mucking it up.
“I have a handful of friends I consider my brothers,” he said, returning to the original topic. “I would die for them if I had to.” His smile had vanished, and his serious demeanor had returned.
“Are they your business partners? Are Stryker and Snap your do-or-die friends?”
He didn’t answer her as they walked into the barn. The scents she loved washed over her as a welcoming balm—fresh hay, oats, leather, and horses. She walked quickly up to the first stall and a tall, red sorrel mare strolled up, knowing Elena was bound to have a treat for her. She pulled a sugar cube from her pocket and chuckled as the mare’s lips moved along her flattened palm, finding the cube and licking it off her hand.
“So is that your trick to get them to like you?”


Holly Castillo lives on an eighty-acre ranch, surrounded by cattle during the day and hearing the howl of coyotes by night. She has endless inspiration for her writing. Holly’s romantic suspense series about heroic Navy SEALs is set in her own backyard of south Texas. She lives with her husband and two children just south of San Antonio.