THE BORGIA CONFESSIONS
A Novel
By Alyssa Palombo 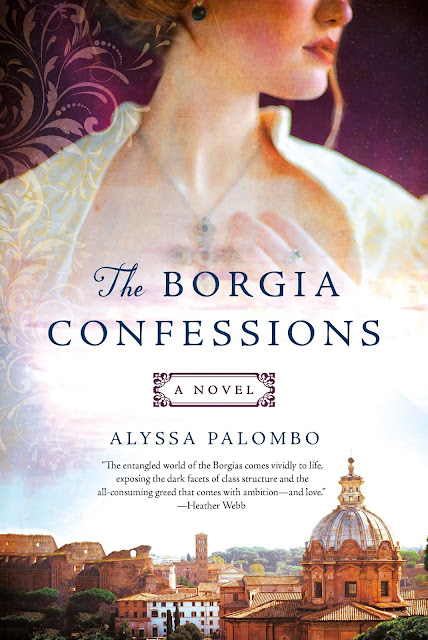 During the sweltering Roman summer of 1492, Rodrigo Borgia has risen to power as pope. Rodrigo’s eldest son Cesare, forced to follow his father into the church and newly made the Archbishop of Valencia, chafes at his ecclesiastical role and fumes with jealousy and resentment at the way that his foolish brother has been chosen for the military greatness he desired.

Maddalena Moretti comes from the countryside, where she has seen how the whims of powerful men wreak havoc on the lives of ordinary people. But now, employed as a servant in the Vatican Palace, she cannot help but be entranced by Cesare Borgia’s handsome face and manner and finds her faith and conviction crumbling in her want of him.

As war rages and shifting alliances challenge the pope’s authority, Maddalena and Cesare's lives grow inexplicably entwined. Maddalena becomes a keeper of dangerous Borgia secrets, and must decide if she is willing to be a pawn in the power games of the man she loves. And as jealousy and betrayal threaten to tear apart the Borgia family from within, Cesare is forced to reckon with his seemingly limitless ambition.

Not much changed for those of us in service at the Vatican Palace when the new pope took over. There were still the same tasks to see to, the same rooms to be cleaned, the same floors to be scrubbed, and the same laundry to be washed. The Holy Father was to be obeyed whoever he was, and his earthly house was to be kept clean and running smoothly so he could attend to far more lofty matters.

One morning I was returning to the kitchens with an empty tray from one of the cardinals’ rooms—the new Vice-Chancellor, Ascanio Sforza by name—when I passed a man heading for the Holy Father’s audience chamber. He was rather garishly dressed, in brightly colored hose and tunic with a huge codpiece, and wear- ing a hat with a large feather in it. He winked and leered at me as I passed, and I cast my eyes down. Surely such a man was not fit for an audience with the Holy Father?

I caught up with one of the other maids, Fabrizia, at the end of the hallway. “Fabrizia,” I murmured, my voice low so my words would not echo off the marble floors and walls, “who is that man?” I jerked my chin toward the man’s retreating back.

She snickered. “That’s Juan Borgia. The pope’s son,” she confided.

I gasped. All of Rome knew of the existence of Cardinal Borgia’s children—Pope Alexander, I corrected myself. It was no secret that many of the other cardinals had mistresses and bastard children as well. But for a pope to acknowledge such children . . . “He brings his children into the Vatican?” I asked, shocked. “He allows them to be known as such, even now that he has been made pope?”

Fabrizia nodded. “It is unusual, indeed. No referring to them as his nephews or nieces, as popes usually do. And you know he keeps a mistress, yes?”

I gasped again. I had heard the whisperings, but I tried my best to close my ears to such things. Gossip—especially gossip about the Holy Father—was a sin.

Yet my curiosity rose, despite my pangs of guilt. I shall confess this sin after Mass on Sunday, I promised myself. “I . . . he does?” I asked.

Fabrizia’s eyes gleamed, and she drew me into a small alcove. She was well and truly settled in to gossip. “Oh, yes. Honestly, Maddalena, even for a country bumpkin you seem altogether too innocent sometimes—and you a widow, no less. Her name is Giulia Farnese and she is the most beautiful woman in Rome. He keeps her with his cousin, Adriana, and his daughter, Lucrezia. Can you imagine? And La Bella Farnese is married to Adriana’s own son! They were just married when Giulia La Bella caught Cardinal Bor- gia’s eye, and so Donna Adriana banished her son to the country estates to get him out of the way—before the cuckold’s horns were even properly affixed to his head, they say.” She snickered. “If the stories are true, Cardinal Borgia—Pope Alexander—has rewarded Adriana and her family richly, including the poor cuckolded son, which is exactly what she was hoping for.” She leaned closer and lowered her voice further. “He is said to be moving them to the pal- ace of Santa Maria in Portico. He wants La Bella Farnese nearer to him—they say there is a secret passage that connects the Vatican Palace to that one, so he can visit her in secret.”

I crossed myself automatically. “God forgive him,” I said. “He has been led astray by a harlot.” Immediately I regretted my words—he was the Holy Father; he could do no wrong. Who was I to criticize, when I could not understand the ways in which God spoke to His representative on earth? “But that is not for us to say,” I added hastily.

Fabrizia rolled her eyes. “Indeed,” she said. “All I know is men do what they want, whether they wear hose or a cardinal’s robes. Or a pope’s, even. I don’t know that God has much to say about it. But his son, that Juan . . .” She nodded in the direction from which we’d come. “They say Pope Alexander has big plans for him, and for his other son, Cesare. He’ll not let his children fade into the background, not the Borgia pope.”

It was some weeks before I saw the other son, Cesare. It was late evening, and he looked to be heading in the direction of the pope’s private rooms. I curtsied to him as he passed in the darkened hall- way in his purple archbishop’s robes. I felt his eyes on me as I curt- sied, and when I rose our eyes met briefly. Goodness, but he was handsome, with his head of thick, dark curls under his cap and his dark eyes and the stubble lining his cheeks and chin, which looked like they belonged on a statue in the Vatican gardens. He was much more handsome than his fop of a brother, that was for certain. His eyes turned away, forward once more.

My cheeks burned with shame as I continued on, back to my cot in the bowels of the palace where I shared a room with three other maids. Cesare Borgia was a man of God, an archbishop, no less—it was not meet that I should think him comely or attractive. I crossed myself, whispering a silent prayer of forgiveness. Back in my room, I bent over the handkerchief I was embroidering, squinting at it in the dim light, and recited a prayer with each few stitches to keep my thoughts from wandering where they did not belong.

Praise for Alyssa Palombo and The Borgia Confessions:

"Readers looking for an immersive, light, romantic read will enjoy this book." –Booklist

"Under Palombo’s skillful hand, the entangled world of the Borgias comes vividly to life, exposing the dark facets of class structure and the all-consuming greed that comes with ambition--and love. I was utterly engrossed from page one. A colorful and suspenseful novel, The Borgia Confessions is packed with complex characters and political intrigue, and will leave readers hungry for more." –Heather Webb, internationally bestselling author of Last Christmas in Paris and Meet Me in Monaco

“Palombo has crafted a sweeping and surprisingly sympathetic portrait of Cesare Borgia, one of history’s most notorious "bad boys,” and the world surrounding him. [A] dark Renaissance parable about the intertwining of lust and power. If you’re as fascinated with all things Borgia as I am, you won’t want to miss this one!” –Kris Waldherr, author of The Lost History of Dreams and Bad Princess

"Handsome. Intriguing. Dangerous. Seductive. [This] is everything you want in a book--it's a romance, a page-turner, and a ride deep into the sumptuous and tumultuous time of Renaissance Italy." –Crystal King, author of The Chef's Secret

"Alyssa Palombo’s deft and delicate prose makes a gorgeous contrast against the visceral and cutthroat world of the Borgias. Dark and decadent, THE BORGIA CONFESSIONS is mesmerizing from start to finish." –Meghan Masterson, author of The Wardrobe Mistress 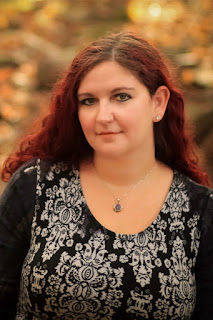 Alyssa Palombo is the author of The Violinist of Venice, The Most Beautiful Woman in Florence, and The Spellbook of Katrina Van Tassel. She is a recent graduate of Canisius College with degrees in English and creative writing, respectively. A passionate music lover, she is a classically trained musician as well as a big fan of heavy metal. When not writing, she can be found reading, hanging out with her friends, traveling, or planning for next Halloween. She lives in Buffalo, New York, where she is always at work on a new novel.